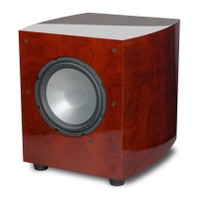 RBH Sound has long been on our Audioholics short list of high performance, high value speakers and now they are revamping their subwoofer to target the very competitive ID marketplace. These new Impression Series of subwoofers leverages some of the core technology, design, and materials from other RBH products. These subs look like they've got the right hardware to promise, everyday home theater mortals real-world, high-impact, low frequency performance at affordable prices.

The RBH Sound I-12 and I-12/e subwoofers sport 350W and 500W amplification with 12" aluminum cone drivers and frequency response into the low 20Hz range with gobs of output making them a killer value. 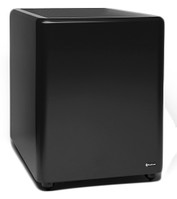 Outlaw Audio decided that it was time to evaluate their line of high performance subwoofers and wondered what could be done to design a better product. After a year of research and design the new Ultra-X12 Subwoofer was released. By combining the best that their LFM1-EX and LFM-1 Plus Subwoofers had to offer, Outlaw audio created a downfiring subwoofer with lots of power and a small footprint. Capable of earning our Large Bassaholic Room Size rating with a manageable footprint at a reasonable price makes it yet another winning product by the Outlaws!

Outlaw Audio's Ultra-X12 subwoofer has a small footprint but large sound, earning our Large Bassaholic room size rating. Tight bass and a powerful amplifier makes this a sub worth looking at.

Unlike most of Yamaha's previous subwoofers that lacked the gusto to hang with the big boys, their new flagship NS-SW1000 means business. The NS-SW1000 features a powerful 1,000-watt amplifier and high excursion 12" driver with a double ferrite magnet and cast frame. The NS-SW1000 has an impressive black gloss finish, reminiscent of a Yamaha grand piano, which provides a touch of elegance to any living space. Does it sound as good as it looks, and can it really thump? Based on the hardware inside, we'd venture to guess a big Yes and Yes. We just may have to put one through our rigorous testing procedure to find out for sure.

It’s a great time to be a home theater lover—especially a bassaholic. It seems as though more and more companies are getting the message that consumers want high performance and great value. Reaction Audio, who has long been an Audioholic fan favorite, has just announced five new subwoofer models that the company says are designed to cover just about every room size and listening need. Check out these new Echo and Gamma Series subwoofers from Reaction Audio.

Killer bass is every man's dream but the physical size of subs often creates a nightmare (not to mention the occasional domestic conflict). Beale Street Audio promises to deliver subwoofer slam and aesthetics with their new line of in-ceiling subwoofers (ICS6-MB and ICS8-MB). We give you an in-depth preview of Beale Street Audio's new subs and their Sonic Vortex port technology that maximizes the bass response of a given enclosure.

Beale Street Audio's in-ceiling subwoofers come in 6.5" and 8" sizes and reach down to 42 Hz and 35 Hz respectively in a low-profile enclosures without the need for special bracketing or back-boxes.

Reaction Audio's new PS-15X ($799.99) and PV-15X ($999.99) aim to redefine what you can expect from a value priced subwoofer. At a glance, the hardware appears impressive for the cost, with both models boasting a long-throw 15" driver as well as a 950W amplifier. To see if they lived up to expectations, Audioholics' subwoofer guru Josh Ricci ran them through his battery of tests, and we've got the results to share with you.

Preview: Reaction Audio's new PS-15X and PV-15X subwoofers aim to redefine what you can expect from a $1,000 subwoofer. We've got bench test results to see if they've succeeded.

Hsu Research has been building high value subwoofers for more than two decades, so they had our attention when they announced their new VTF-15H MK2 and VTF-3 MK5 HP. On paper, these new models are quite similar. Both feature a 15" fiberglass reinforced driver and 600W RMS continuous rated amplifier. In terms of pricing, the VTF-15H MK2 weighs in at $1,008 shipped, while the VTF-3 MK5 HP undercuts its big brother slightly at $898 shipped. Based on preliminary HSU CEA-2010 test data, both of these new subs seem qualified for our Extreme Bassaholic rating which is quite a technological feat at this price class.

We are always on the lookout for new speakers and subwoofers and CEDIA is a great time to find out about the next cool products. Harman has announced at CEDIA 2014 the release of their new B1 subwoofer. The B1 sub has a 250-watt amplifier and a forward facing 12" woofer. The woofer is constructed out of a micro ceramic composite and it has a downward-firing port for increased bass response. Most interestingly, the Revel B1 has a three-band parametric EQ. All this in a compact box for $999. The only thing we don't know is the frequency response.

Preview: The 12" Revel B1 subwoofer has 250 watts of power, a built-in 3-band parametric EQ, improved driver materials and construction, and extensive internal bracing for $999. Shipping in Jan 2015.

Rythmik Audio is a forum favorite that has built a solid reputation for offering high performance, high value subwoofers. Their entry level LV12R subwoofer appears to be no exception to this: priced at $599 (shipping included to the continental US), it sports a 12" paper cone woofer motivated by a 300W RMS amplifier. Of course like all Rythmik subwoofers, the LV12R also includes the company's patented Direct Servo technology which claims to reduce distortion and compression effects. Want to know more? Click to read all the details.

Preview: The Rythmik LV12R subwoofer is priced at $599 and boasts a servo controlled 12" paper cone driver motivated by a 300W RMS amplifier in a vented enclosure. Click to read all the details.

Power Sound Audio is a company focused on one thing: delivering high performance subwoofers for as little cash as possible. With their SE driver upgrade, PSA is promising substantially better performance for only a modest increase in cost over the outgoing models. Yeah, we've heard that line before too. Fortunately, Audioholics subwoofer guru Josh Ricci was able to get his hands on the XS15se and XV30Fse to see just what the new driver offers. Want to know more? Keep reading.

Preview: Power Sound Audio's new XS15se and XV30Fse feature upgraded drivers and modest bump in amplifier power over the outgoing models. Click to read exactly what these new subwoofers can do.

The RBH Sound SX-1212P/R, a large vented system housing dual 12” drivers, and a 2400 watt rated amplifier, represents their biggest and baddest subwoofer. From 12.5-40Hz the SX-1212P/R produced the highest output that Audioholics has recorded from any subwoofer reviewed to date; shattering our Extreme Bassaholic rating. That helps to explain why it was so much fun on those movie nights. If you are looking for a system that will bring authoritative yet clean bass into even a large space the RBH SX-1212P/R may be just the ticket.

RBH Sound continues it's 38 year legacy of excellent sounding speakers with the 10" 350 watt (RMS) SX-10/R subwoofer at $1,300 and the 10" 150 watt (RMS) S-10 subwoofer at $500. Both subs feature RBH's own proprietary aluminum cone bass driver with the SX-10/R upgraded to the Status driver found in their $50k/pair flagship speakers. In a culture of mega-watt subsonic subwoofers that overcome modern construction practices, RBH takes a refreshing approach to subwoofer design with these two relatively small subs that add to the music listening experience.

Review: The RBH Sound SX-10/R and S-10 subwoofers both featured 10" aluminum drivers in a ported box. Music performance is their strong suite with the SX-10/R digging deeper with more authority.

Reaction Audio is a new entrant to the hyper-competitive world of Internet direct subwoofer manufacturing; however, their PS 215X boasts a pair of 15" woofers and 1,000W of amplifier power, not to mention an affordable price of $1,179.99. Of course it takes more than sheer brawn to make a winner, and features like magnetic grills, radiused edges, and a satin black finish help this monster in the SAF (spouse acceptance factor) department. Curious to know more? Click to keep reading.

Preview: Reaction Audio's PS 215X subwoofer is a beast with a pair of 15" woofers and 1000W of amplifier power on tap. Click to read the all the details on this $1,179.99 "sub"terranean monster.