The Pioneer VSX-94TXH is a solid, well-built 7-channel receiver. Those who love Pioneer can rest assured that this flagship product will deliver power in droves and will receive and decode the latest high definition audio formats. Video processing is above-par and the VSX-94TXH's ability to network with your home PC is a cool feature that gives it all that much more functionality. It's also a very beautiful receiver. For the marketplace in general, I'd probably encourage everyone to take a look at all the available options before plunking down their money on this product. For those who consider power to be king, give the Pioneer a second look - it's got that department nailed.

The Pioneer VSX-94TXH is a solid, well-built 7-channel receiver. For those who consider power to be king, give the Pioneer a second look - it's got that department nailed. 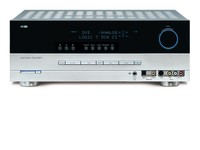 The Harman/Kardon AVR-147 is a full featured A/V receiver with a hearty amp section, conservatively rated 40 watts into all five channels simultaneously. The AVR-147 is fully loaded with other features too. These features include Dolby Digital and Dolby Pro Logic II, Dolby virtual speaker, Dolby headphone, dts, dts 96/24 and dts Neo:6, and Logic 7 DSP. Dual independent power supplies for front and surround channels, a 24-Bit/twin-core Cirrus Logic CS 49510 DSP processor with 32-bit post processor and 192kHz/24-bit D/A conversion. The AVR-147 also has HDMI switching, one button EzSet/EQ auto calibration, and is "bridge-ready" for an optional iPod docking station (dubbed "The Bridge"). All this for $449.

For around $500 the Harman Kardon AVR 147 provices HDMI switching, one button EzSet/EQ auto calibration and the signature sound that Harman Kardon fans rave about.

At a rock bottom price of only $349.95, the Yamaha RX-V463 is an incredible value for those looking to get into a home theater receiver on the cheap without making a huge sacrifice in quality or features. With a rated power of 100 watts x 5 the RX-V463 is no pansy when it comes to power either. Build quality is very good and the unit weighs a solid 17.6 lbs. This is a great budget receiver.

The Yamaha RX-V463 has five channels at 100 watts each, 192kHz/24-bit DACs for all channels, 6-channel external decoder input, iPod and Bluetooth compatibility, and YPAO room correction for $350.

Marantz has a winner in the SR7002 AV receiver. This product is powerful, yet simple - something not easily accomplished in today's era of endless configurability. Some of the more advanced features and configurations may be pulled aside for D&M's higher-end Denon receivers, but the Marantz is clearly taking shape as the "bang for the buck" product line. With the addition of HDMI 1.3 to the mix and providing 4 of these high definition inputs, the SR7002 distances itself from much of the competition. At the price Marantz has brought this receiver to market, I'd say the SR7002 is a bargain and Marantz-lovers everywhere should rejoice that the company is more than back in the game - they are leading several innings.

Marantz has a winner in the SR7002 AV receiver. This product is powerful, yet simple - something not easily accomplished in today's era of endless configurability.

The RX-V1800 is rated at an impressive 130 x 7, and uses Yamaha’s Digital ToP-ART design that includes top grade audio-grade parts and devices. The receiver also features Burr-Brown 192 kHz/24-bit DACs for front channels and 192 kHz/24-bit ADC for Main Zone. The surround back amplifiers are also assignable for bi-amped connections. As always build quality and aesthetics are top notch. Packed with powerful audio and video processing, plenty of HD inputs, a high quality amplifier section and sharp looks, the Yamaha RX-V1800 offers a fantastic value for those who have ventured into the HD world.

The Yamaha RX-V1800 is rated at an impressive 130 watts x 7, and uses Yamaha’s Digital ToP-ART design. Yamaha RX-V1800 offers a fantastic value for those who have ventured into the HD world.

The Yamaha RX-Z11 represents the pinnacle of technology in a flagship receiver. It’s ability to transform your listening space into a concert venue or mega Cineplex is unrivaled thanks to the powerful arsenal of DSP processing, and robust amplifier section for a full 11.2 channel spectacle. With its very clever power amp assignability and music mode distribution, it proved to be the ultimate multi channel / multi zone receiver capable of whole house entertainment and high definition A/V reproduction.

Review: The Yamaha RX-Z11 has the ability to transform your listening space into an 11.2CH concert venue or cineplex is unrivaled. At its new $2499 price, it’s an absolute bargain while it lasts.

The new Yamaha RX-V663 AV Receiver comes armed with all of the latest in HDMI connectivity, and HD decoding at bargain basement pricing. Just about all the features of the higher end models at almost half the price makes this receiver one of the hottest tickets of the year. If you want HDMI 1.3 inputs and plenty of analogue connections (including 3 in / 1 out component video), 17 surround modes, YPAO auto calibration, two subwoofer outputs, and Burr-Brown 192kHz/24 bit DACs and ADCs, the RX-V663 is for you. If you want video upconversion, you're going to have to pay almost twice as much. That makes the RX-V663 one of the best values out there right now.

The new Yamaha RX-V663 AV Receiver comes armed with all of the latest in HDMI connectivity, and HD decoding at bargain basement pricing. If you have $550 for a receiver, look at the Yamaha RX-V663.

The RX-V863 is the top of the new mid line receiver offerings from Yamaha. It sports HDMI 1.3 inputs, internal decoding of all the latest HD audio formats, 1080p analogue video upconversion, and two subwoofer outputs. Two subwoofer outputs! All the bells and whistles include and HD radio tuner, 7 channels with 105 watts each, and no less that 17 surround modes. All that and more for just under $1k!

The Yamaha RX-V661 AV receiver is so loaded with technology we cannot cover everything it is capable of in this review. If you are looking for an AV receiver that gives you access to plenty of power, features, and connectivity options the Yamaha RX-V661 is a great option. We were impressed with this receivers value, features and ease of use. It is truly a bring it home, plug it in and start enjoying your movies and music receiver. Yamaha has produced an incredibly versatile AV receiver in the RX-V661. On features alone this would be a product worthy of a second look, but when you factor in the Yamaha sound quality and ease of use, you've got a device that is truly worthy of the center seat in anyone's home theater system.

Yamaha has produced an incredibly versatile AV receiver in the RX-V661. With tons of connections (including 1080p compatible HDMI (Version 1.2a) switching), this $500 receiver should be on your list.

Sony's new STR-DG510 AV receiver provides 2-in/1-out HDMI pass-through switching for under $200! With 100 watts per channel and five channels, two component inputs that are capable of passing up to 1080i video signals, and a calibration microphone and a system whereby it will automatically set up your speakers for you. While there are some compromises to be made with this receiver, the Sony STR-DG510 manages to offer HDMI connectivity and pack many great features into a ridiculously affordable product. There are some things the receiver does not offer - like 1080p connectivity or multi-channel music inputs and outputs, but for $200 it is really tough to complain when you get so much.

Sony's new STR-DG510 AV receiver provides 2-in/1-out HDMI pass-through switching for under $200! That's tough to beat if you're in the market for an entry level AV receiver.

The Sony STR-DG810 offers you an integrated 3x1 HDMI switcher as well as three component video inputs. These HDMI inputs can accept resolutions up to 1080p/60p and will successfully pass-through up to 8 channel of linear PCM audio to a display. You can also tell the Sony to disable the HDMI audio so your TV only receives video signals from the receiver. You have three assignable digital audio inputs to choose from, two optical and one coaxial. Sony rates the receiver at 110 watts per each of its 6 channels. If you're even thinking about adding a high definition DVD player to your system in the future, then this receiver is probably worth adding to your short list to audition.

The Sony STR-DG810 has three HDMI inputs, 110 watts per each of its 6 channels, and the ability to decode all audio formats except the new HD ones and that makes this receiver worth checking out.

The Marantz SR4002 surround receiver comes fully loaded with features previously found on units that were considerably more expensive. These features include 192kHz/24-bit processing on all seven channels, full complement of DTS processing including DTS 96/24, Dolby Digital EX and Pro-logic IIx, Dolby headphone, HDCD decoding (unheard of in this price range), HDMI V1.3 switching and V1.1 repeating, S-video up conversion to component, 8-channel input and 8-channel pre amplifier outs, (this will have some separates people thinking), and M.R.A.C. auto calibration. With a price tag of only $550, the Marantz SR4002just might be one of the best buys of the year.

The Marantz SR4002 has seven channels of all discrete amplifier stages, HDMI V1.3 Switching with V1.1 Repeating, (7.1) LPCM via HDMI, and a ridiculously low MSRP of only 549.99.

Sometimes when people ask me to research a GREAT budget AV receiver I am truly amazed at the features and quality you can get for just a little bit of money. Sometimes though, I also find exactly what I would expect from budget gear - some basic features, and a lot of compromises that are going to make you want to upgrade, before that "new receiver" smell has worn off. Unfortunately, I would put the Sherwood RD-6500 in the latter category. While this receiver covers the audio portion of the receiver pretty well, only having access to composite video makes the receiver obsolete before you even get it home.

The Sherwood RD-6500 could be considered the perfect stereo receiver - that also does surround sound but only having access to composite video makes it obsolete for video before you even get it home.