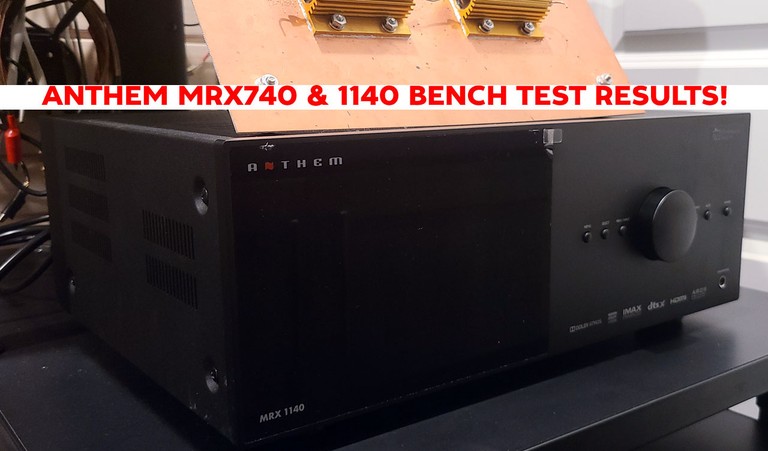 Feature Differences between the Anthem MRX 740 vs 1140

All measurements were conducted using our Audio Precision APx585 8 Channel HDMI Audio Analyzer.  I go back and forth between the MRX740 and MRX1140 measurements since I tested both units simultaneously. I only show both model testing for results that displayed measurable differences.

The MRX740/1140 AV receivers are capable of > 5Vrms unclipped from the multi-ch preamp outputs which is more than 2X voltage drive needed to make most external amplifiers reach full unclipped power.

The Anthem AVRs have some excellent output drive from the preouts. The distortion is vanishingly low at <0.0006% THD+N or 105dB SINAD for ASR enthusiasts. With 7CH driven, the preamp produced 5.48Vrms at 0.1% THD+N. These receivers have some serious preamp sections built into them.

The Anthem MRX740 preamp output section is one of the best I’ve ever measured in an AV receiver. This can be seen by the 3rd harmonic distortion down 108dB below the fundamental 2Vrms output drive at 1kHz. The noise floor is excellent and the power supply hum is down in the mud at -116dB. Excellent! It’s no surprise that the preamp outputs of these Anthem receivers are quiet. 110dB SNR @ 2Vrms with a 0dBFs input signal is excellent and among the best I’ve measured.

Note: Ignore CH3 which is the subwoofer channel.

With one channel undriven and the other channels driven, channel to channel crosstalk was excellent at 95dB CH-CH isolation at 1kHz and >70dB isolation at 20kHz. Anything > 60dB at 20kHz is what I consider to be sufficient for excellent stereo separation and minimal audible channel leakage.

The Anthem AV receivers do NOT have an analog bypass mode meaning your analog signals will be digitized. In some AVR’s I’ve found they used mediocre ADC’s which could result in higher noise and distortion. With 1Vrms input and 2Vrms output, I measured 94dB SNR A-wt which is a good, quiet result though not as stellar as their fabulous STR Preamp (106dB). Don’t fear the lack of analog bypass for your analog sources. You can do them justice here but for the absolute best sound, the digital inputs are the way to go. On a separate note, if you want a phono stage and analog bypass, you'll have to step up to their AVM70 processor.

“Super Sub Fronts” is Anthem’s nomenclature for enabling the subwoofer for 2CH music when your mains are set to fullrange. IF you don’t set the mains crossover, the sub will by default will have a 40Hz LPF engaged when listening to 2CH music. I recommend setting the mains crossover to your desired frequency (usually 80Hz) and then engaging “Super Sub Fronts” IF you want your mains to still play fullrange bass while simultaneously having your subs play with your desired crossover setting. The graph above depicts exactly this with the blue trace showing the default crossover off setting of the mains engaging a LPF of 40Hz for the sub out and the green trace showing the response based on the 80Hz crossover I set the mains to. The purple trace is the L/R mains playing fullrange with “Super Sub Fronts” engaged.

The Anthem MRX740/1140 bass management engaged with a crossover point of 80Hz resulted in the expected 12dB/oct HPF response for bass managed speakers but only 12dB/oct instead of 24dB/oct LPF on the sub out that we’ve come to expect in today’s modern AVRs. I asked Anthem if they could look at offering a steeper 24dB/oct crossover point and within a couple of weeks of my request, they sent me beta firmware to test.

Alas, now we have perfect slopes. The LPF is 24dB/oct with -6dB pt at the crossover frequency of 80Hz that I selected. Bravo!  I recommend updating your firmware to take advantage of this enhanced function. Note, I also checked the “Super Sub Fronts” mode and it worked as expected.

Using our Audio Precision APx585 8-channel HDMI analyzer, we conducted a full barrage of multi-channel amplifier tests on Anthem MRX740 & 1140 per our Amplifier Measurement Protocol. We tested power using three methods all of which were taken at < 0.1% THD + N:

Keep in mind most review publications don't do continuous full bandwidth power measurements and they usually publish power measurements at 1kHz into clipping at 1% THD + N. Our measurements are very conservative as we use a dedicated 20A line with no Variac to regulate line voltage.  We constantly monitor the line to ensure it never drops more than 2Vrms from nominal, which in our case was 120Vrms.

Note: Unless otherwise noted, the following amplifier test results are for the linear AB 140 watt/ch rated amplifiers of the MRX 740 and MRX 1140 AV receivers, respectively.

The MRX1140 doesn’t produce much more power into 4 ohm loads (176 watts/ch @ 1% THD+N) than it did into 8 ohm loads (166 watts/ch @ 1% THD+N).  There is some current limiting going on here to protect the amplifiers similar to what we see on competing AV receivers with the dreaded impedance switch. At least this doesn’t hinder power with all channels driven into 8-ohm loads like we see with some AVRs when setting the impedance switch to 4-ohms. SINAD drops about 10dB (though still not bad at 75dB) when the amps are driven to their limits into 4 ohm loads.

I do FFTs at 1 watt to show how clean an amp will be at low power levels where problems could be more audible and not masked by a louder SPL. The MRX740 shows some higher power supply harmonics (-72dB) compared to the MRX1140 (-88dB). This is inaudible but academic and perhaps shows favor to why Anthem is using a torodial power supply in the MRX1140 with an E-Core in the MRX740. The 3rd order harmonic is 90dB below the 1kHz fundamental which is a good measurement. I tested the Class D amp sections separately from the linear AB amps for the Anthem receivers. The power output of the MRX740 and 1140 amplifier sections are rated identically and I found this to be the case for the Class D sections with slight variances for the AB amp sections as noted in this report and associated data table. In efforts of simplicity, I only show graphical differences with the remaining data in the power table below.

I was a bit puzzled by the bandwidth limited frequency response of the Class D amp section in these Anthem receivers despite setting them for full range for these tests. I found the -3dB pt to be 20Hz and 17kHz, respectively. This should still be fine if used as height channel duty.

This amp was a bit tricky to measure since its switching frequency is within the bandwidth of my test gear and I had to compensate by disabling auto-range as I initially thought it was a much nosier amp than shown here. The harmonics are 101dB below the fundamental which is excellent. A small amount of power supply hum is present but down -80dB, non-issue. The channel-channel crosstalk was good for a multi-ch AV receiver. With ACD except for the one under test, the MRX740 provided > -50dB of CH-CH isolation at 20kHz. The Anthem MRX740 and MRX1140 both have the ability to reassign the amplifier sections. The options are tabulated below as of Firmware ver: 1.106.157 loaded into my units.

As I indicated in this test report, I do NOT recommend EVER assigning the Class D internal amps in these AVRs for bi-amping the front channels. It is my recommendation that Anthem removes this option. The Class D amps are fine for height or Zone 2 duties. But using them in bi-amp mode for your front speakers means there will be a 3.7dB penalty in dynamic range. It would make more sense if the Front and Surround Channels could be reassigned as Height 1, 2 or 3 that way a user could purchase one of Anthem’s excellent 5CH amps to power the bed channels and use the internal Class AB amps to power the height channels. Then they could use the Class D amps to power Zone 2 or Front wides.

The Anthem MRX740 and MRX1140 AV receivers have world class processing and internal preamplifiers. They are extremely low noise and have plenty of drive to work optimally for any home theater or audiophile amplifiers you’d like to use with them. One could easily make the argument for picking up one of these units instead of spending more on a dedicated Pre/Pro and just adding external amplification to better power more demanding low impedance speakers. In fact, I will make such an argument that the MRX740 is one of the best 11CH AV processors currently on the market and the MRX1140 for 15CH of processing. The MRX1140 has a slight advantage in a better power supply IF you’re using the internal amplifiers as well as dual independent subwoofer outputs and more channels of processing with two more channels of amplification.

While these AV receivers aren’t the most powerful in their respective price classes, they offer commendably good amplifier performance if paired with loudspeakers with a nominal impedance of 6 ohms or higher. I am looking forward to testing out the latest iteration of Anthem’s ARC Genesis, which is among the best room correction, and user friendly software options out there. Stay tuned for the full review as we integrate the MRX1140 AVR into the AH Smarthome 5.2.2 master bedroom system featuring the Klipsch Heritage passive Soundbar and dual 8” in-ceiling JL Audio subwoofers.

Like This? Check out our other AV Receiver Reviews!
Discuss This Article
PENG posts on February 08, 2023 13:27

I drive a pair of KEF Ventura 6 outdoor speakers (90dB sensitivity, 6ohm nominal) with a Bluesound POWERNODE (80wpc) and it is plenty loud at 30% volume for my patio/pool area. Even with 20+ people on the patio, the music is plenty loud – any more and the neighbors would be unhappy!
PENG posts on January 21, 2023 09:33

There is no simple yes/no answer to your questions. “All else being same”, if power output is included, then the “same” needs to be clarified. For example, if the power output required are the same, and that “same” means well below the AVR and separates power rated output limit, say 10 dB below their limits, then the system will most likely sound the same.

If the required vs rated output limits are close enough, then the “separate” power amp, assuming a well designed one, may have the upper hand because power amps typically have better voltage and current capability than the AVR power amps and will do better in handling dynamic peaks, and/or when the contents played often in frequency ranges where the speaker's impedance may dip too low for the amps.
Post Reply
See also:
About the author: