NADs new C 510 is a digital preamp/DAC, which can be connected directly to your computer (Mac or PC) via a USB Type B connection (the square one) allowing you to use it as a standalone DAC. It accepts HDMI (two inputs), optical, coaxial, and AES/EBU inputs (one each), but it can only output stereo. These connections are all 192kHz/24bit capable for the highest possible audio quality. The thing we really like about the C 510 is that it is an easy and no-nonsense way to add high-end digital content to an existing analog-only system. The downside is the price.

Preview: NADs new C 510 is a digital preamp/DAC,which can be connected directly to your computer or used with your digital equipment with HDMI, optical, coaxial, or AES/EBU. The downside is the price. 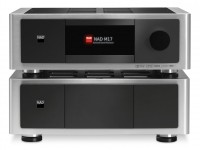 NAD's latest preamplifiers, the M12 and M17, continue to show the company's dedication to their Modular Design Construction technology. While you'll need to wait another year (reportedly) for HDMI 2.0 and HDCP 2.2, the preamps that will eventually support them are here. While the two-channel M12 and seven-channel M17 aren't inexpensive at $3,499 and $5,499 respectively, they are packed with NAD's latest technology and a new look to boot. Matching amplifiers are also available, with the two-channel M22 and seven-channel M27 promising adequate reserves of power.

Preview: The NAD Master Series M12 two-channel preamp and DAC and M17 seven-channel preamp aren't cheap but they do have all the latest NAD technology and a new look to boot.

Cambridge Audio's Azur 851 separates aren't exactly inexpensive; however, compared to the flagship level products from other marques, an $1,849 preamplifier and a $2,499 stereo amplifier are downright pedestrian in pricing. Unsurprisingly, Cambridge claims to deliver near distortion free audio from their finest offerings; of course there's also no shortage of power on tap, with the Azur 851W capable of delivering 200W into 8 ohms, and 350W into 4 ohms. Curious to know more? Click to watch the video review and read the highlights.

Krell's $15k Illusion and $7k Illusion II preamplifers may look the similar, but they are completely different. The Illusion is an all-analog solution that breaks the power supply into a separate box. It has proprietary connections so, if you have all Krell gear, you can realize sonic benefits you didn't know you needed. The Illusion II has digital connections, a headphone output (no, the Illusion flagship doesn't have a headphone output), and no ability to add an internal crossover for your subs. We find some of their design choices odd but, then again, they've been at this a long time. Surely they know their customers.

Preview: Krell's $15k Illusion is an all-analog preamplifer while the $7k Illusion II adds digital inputs and processing. Made for different, but obviously wealthy, customers.

Let's not beat around the bush - $6000 will get you the Yamaha AVENTAGE CX-A5000 and MX-A5000 separates. If you have ever wanted separates but didn't want to sacrifice features, it is a good time to be alive. While the CX-A5000 isn't without a few oddities, for the most part it is a fantastic processor. The MX-A5000 is a beast of an amp with enough channels of amplification to power yours and your neighbor's systems with a channel to spare. We love the new trend in high quality separates from the likes of Yamaha and if the CX-A5000 and MX-A5000 is what is in store for us, we can't wait to see what else they can come out with next. Highly Recommended!

Review: The Yamaha AVENTAGE CX-A5000 Processor and MX-A5000 11-channel amplifier are for you if you have ever wanted reasonably-priced separates but didn't want to sacrifice features or performance.

Mark Levinson's new № 585 integrated amplifier promises the best possible performance for your digital content. It also can be used with analog sources but they didn't let us know how to connect analog sources to it. With 32-bit/192kHz DACs, every possible digital input, and 200 watts per channel, the № 585 is sure to bring you all the sonic bliss your music can provide. It is up to you to decide if it is worth $12,000.

Hegel has made a name for themselves with their standalone integrated amps, amplifiers, and DACs. The H80 takes some of the top integrated amp, pre-amp, and DAC technology and puts it in the same box. Hegel is certainly giving you something for your $2000 with the Hegel H80 integrated amplifier. Sporting three analogue inputs (two RCA, one balanced), four digital (two optical, two coax), and a USB to your computer, Hegel is breaking from audiophile tradition by including so much functionality in one box. Can you get more for less? Yes. But you can also get less for a lot more. We applaud Hegel for breaking the audiophile mold and branching out into digital files.

Hegel has made a name for themselves with their standalone integrated amps, amplifiers, and DACs. The H80 takes some of the top integrated amp, pre-amp, and DAC technology and puts it into one box.

Meridian has launched the G65 Surround Controller, the successor to the 565 Digital Surround Controller. The G65 is designed to drive Meridian's DSP-based speakers, integrate seamlessly with Meridian's digital ecosystem, and connect to conventional amps and speakers. Meridian's proprietary room correction, Apodizing upsampling system, and powerful DSP are some of the many features Meridian touts about the new model. Will the G65 make your Christmas list this year? If so, you have a very large Christmas budget.

What’s the difference between a $1,199 full featured AV Receiver and an $18,000 boutique pre-amp/processer? Perhaps less than you think as Simaudio, responding to speculation, confirms that the “brains” and “guts” of their Moon CP-8 Pre/Pro was based on Denon AVR-2808CI AV receiver. These AVRs were bought off the retail shelves and modified by Simaudio without coordination from Denon, Audyssey, or any other technology providers. We asked how they justified using someone else product, without permission, to market and sell it as their own at a 15x mark-up. Read the article to find out.

Preview: Simaudio Moon CP-8 AV Processor is a modified Denon AVR-2808CI receiver. Yet Simaudio didn't outwardly declare this in their marketing literature, or coordinate with Denon or other tech.

The Yamaha AVENTAGE CX-A5000 AV preamp and MX-A5000 multi-channel amp represent the state of the art in home theater AV Separates. Their $3k a piece price tag, while more expensive than other separates solutions, is clearly justified considering that the CX-A5000 processor has all the latest features and technology. With 11 channels at 150 watts each, the MX-A5000 can power not only your home theater, but your whole home audio system. The 11.2 channel CX-A5000 can feed more speakers in your home theater than the receivers of your two best friends combined. The CX-A5000 employs state of the art DACs by ESS, XLR outputs, multi-zone support with video and GUI, networking, the latest YPAO, 4k upscaling...the list goes on. If you have to have the best - this just may be it.

This review is going to be polarizing. It just is. This is the Surround Master by Involve Audio. It's a new type of surround decoder that, well, makes a lot of claims. For starters, the most polarizing claim is that it provides "The Most Accurate Sound Reproduction Available. Period." We'd take issue with that statement as our definition of audio perfection is adhering to the original.

This is a review of the Surround Master by Involve Audio. It's a new type of surround decoder that, well, makes a lot of claims. It converts 2CH audio to simulated surround sound. It sounds....

Looking around at some of the high end two channel offerings available today, it's quite possible you'd think that the zenith of stereo reproduction would be represented by a bare bones analog preamplifier fronted by a fine turntable, feeding a power amplifier, which in turn powered a pair of loudspeakers. While such a system can sound quite good, the fact remains, this is 2013, not 1973. The advent of digital audio and bass management has changed the landscape of audio significantly, and for the better. Fortunately, not all manufacturers opt to stick their head in the sand, case in point Parasound with their new P 5 stereo preamplifier. Priced at $950 and boasting three digital inputs (USB, coaxial, and optical) as well as analog bass management, the P 5 preamp appears to have what it takes to be the brains of a modern, high end two channel system. How does it stand up to a first glance by the Audioholics? Read on to find out.

Priced at $950, the two-channel Parasound Halo P 5 isn't your average preamplifier, in that it has a feature set beyond a handful of analog inputs. Nice aesthetic, good price; is it for you?

The first thing you will notice when perusing Brik’s website is their modular design (my term, not theirs). Instead of offering expensive, all-in-one products, they split out important audio functions into affordable standalone units. Overall, they offer up some pretty cool products and reasonable, if not very good, prices. From their DAC to their Phono Pre-amp, there is something here for most everyone. But things aren't perfect, there are major advantages and disadvantages to their design scheme. Read on for our full impressions.

We dive into the entire Brik Audio Instruments lineup to see how they "stack" up the competition. In short, they offer some really intriguing products at reasonable prices. Read on to find out more.

The Classe SSP-800 is a multi channel AV processor solution for those who prefer just two. As a two channel analog preamp, the SSP-800 succeeds admirably, providing superior two channel performance and flexible speaker customization options geared to allow the consolidation of what some would consider two separate systems into one. As a multi channel digital audio/video surround sound processor, the SSP-800 provides all of the necessities with a clear focus on audio quality, but only perfunctory video functionality. Great aesthetics, form and function put a nice finishing touch on this upper echelon product.