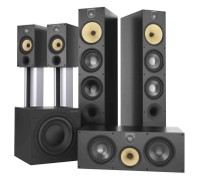 Bowers & Wilkins is at it again with a refresh of their bread and butter 600 series of loudspeakers. The new lineup naturally offers several technical advancements over their predecessors, as well as a slimmed down appearance to improve spousal acceptance. With prices ranging from $1,650/pair to $550/pair, B&W is hoping the improved aesthetics and sonic qualities will draw buyers in a hotly contested market. Keep on reading to see what the new line brings to the table.

Bowers & Wilkins has released the refresh of their entry level 600 series loudspeakers. Priced from $550/pair to $1650/pair, read on to see what the Audioholics think after talking a glance. 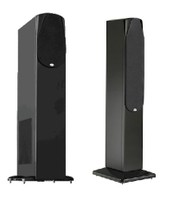 NHT's Classic Four and Absolute Tower loudspeakers aim to challenge the notion that an attractive loudspeaker offering excellent build and sound quality must come with a premium price. With MSRPs of $2,700/pr and $1,260/pr respectively, their price points are firmly in the "affordable by normal people" category. Still, the market is flooded with companies claiming great sound for little cash. What sets the NHT's apart from the competition? Keep reading to find out.

Preview: NHT has two towers to choose from in their lineup: the Classic Four and the Absolute Tower. Read on as Audioholics takes a peek at what they have to offer.

With the performance Ocean Way Audio are promising of the Montecito speakers (24kHz to 30Hz +/- 1.5dB and matched pairs measuring within .5dB of each other), you can see why someone with a lot of money that wants the absolute best performance they can get out of a two channel system would consider these speakers. If all it took to make a great looking speaker was the best quality materials and phenomenal performance, the Montecito speakers would be the best looking speakers on the market. Our suggestion is to invest in some high quality outriggers to dress these plain-Jane, $48,000 a pair, speakers up a bit.

Ocean Way Audio Montecito speakers promise a a frequency response from 24kHz to 30Hz at +/- 1.5dB and matched pairs measuring within .5dB of each other for $48,000 a pair.

Meet Yamaha's latest and greatest loudspeaker, the Soavo NS-F901. This three-way 4-driver tower stands at a 41" tall weighing a hefy 67lbs. Priced at $5,000/pair, and finished using the same process seen on Yamaha's grand pianos, inquiring minds want to know: how do these beauties hold up to a first glance by the Audioholics? Keep reading to find out.

Preview: The Soavo NS-F901 is Yamaha's latest and greatest floorstanding loudspeaker. Priced at $5,000/pair and boasting a fine piano black finish, do they hold up examination by the Audioholics?

Fresh for CEDIA 2013, Monitor Audio released their new Silver series loudspeaker lineup. Consisting of 8 different models, the Silver range is priced from the Silver 1 at $875/pair to the flagship Silver 10 Tower at $2,500/pair ($2,800 with premium finishes). What do you get for your hard earned cash? Keep reading to find out and check out our video preview of this very impressive bookshelf, towers, center and subwoofer lineup of speakers.

Monitor Audio has released their new Silver series loudspeaker lineup at CEDIA 2013. Consisting of 8 different models, has Monitor Audio hit one out of the park? Keep reading to find out.

Invisibility and speakers don't often go together. Triad is challenging that notion with their DS700se invisible speaker. Mounted in the wall and mudded in and painted, this speaker is about as invisible as you can get. Now featuring two panels per channel, the DS700se improves upon the previous Triad models by extending the bass down to 50Hz. At $2250, you may not see the speaker, but you will see your bank account take a hit to install a full system. But with the other option being "destroying a marriage over a set of speakers", the DS700se Invisible Speaker may be a deal.

Mounted in the wall and mudded in and painted, the Triad DS700se speaker is virtually invisible. Featuring two panels per channel, the DS700se extends down to 50Hz, improving on previous models.

The Legacy Audio Theater Towers aren't exactly your average floorstanding speakers: at less than a foot deep and made to be placed against a wall, they're designed to take up minimal floorspace. Priced at $12,000 in a standard black finish, how do we think the Theater Towers stack up? Keep reading to find out if they could be the ultimate audiophile lifestyle type speaker system.

Preview: The Legacy Audio Theater Towers ($12k/pair) aren't the average tower speakers; at under a foot deep, they're made to consume minimal floorspace. The ultimate lifestyle product?

Induction Dynamics demoed their new ID1 tower speaker. This is a speaker that has been completely revamped from its former iteration. The ID1 was first introduced in the 90s, but the updated version, which was finally released several months ago, has a new front-ported cabinet design. They placed the second woofer on the top and make it a more imposing product. There is a 3” soft dome mid-range driver and a 1-1/8” inverted titanium dome tweeter. The mid-bass is handled by a 6.5” Kevlar woofer, and the two 10” mica-graphite poly cone subs round it out.

Induction Dynamics demoed their new ID1 tower speaker which has been completely revamped from its former iteration. The ID1 was first introduced in the 90s, but the updated version is a 4-way design.

Although Definitive Technology rolled out a number of new products at CEDIA 2013 this year, the one we were most interested is the Mythos ST-L SuperTower. Their new flagship SuperTower, with an MSRP of $5k/pr, the Mythos ST-L is a complete redesign of their original Mythos ST SuperTowers. The new ST-L keeps the same tall, slim profile of its predecessor but everything else has been redesigned from the ground up, literally.

The Mythos ST-L is a complete redesign of Definitive Technology's original Mythos ST SuperTowers. Read on for our take on the new design.

The Studio 2 series acts as a replacement for JBL's current Studio 1 series. The overall look is traditional with a little touch of modern, a nice balance for a lineup costing between $249 and $599 per speaker. Although there are 10 different speakers in the lineup, some general are themes found in every one of them, like a new waveguide for the tweeter. We are pretty excited to see the Studio 2 series hit the market and to get them in for review. Read on for more information.

JBL showed off the new Studio 2 speaker lineup, the replacement for the Studio 1 series, at CEDIA 2013. We took a close look and came away impressed. Read on for our thoughts.

We're always excited to see a new line of speakers. When Cambridge Audio announced their new Aero line, we couldn't wait to take a look. We got that chance at CEDIA 2013. Cambridge Audio was thrilled to tell us all about their new Aero line. The big advancement was the 2" BMR (Balanced Mode Radiator) "tweeter". This driver is designed to play from 20kHz down to 250Hz - far farther than a traditional tweeter. We were skeptical of their claims that they were "revolutionizing audio" but their excitement was infectious. We're curious to see how linear the driver is.

Cambridge Audio was thrilled to tell us all about their new Aero line. The big advancement was the 2" BMR (Balanced Mode Radiator) "tweeter". This driver is designed to play from 20kHz down to 250Hz.

With its quad 5-inch woofers and 1-inch silk dome tweeter covering the top half of the loudspeaker, the 51-inch tall Fluance ES1 tower speaker system is anything but vertically challenged. The ES1’s produce an excellent soundstage, and ability to play cleanly at high SPL, though with a bit too lively treble at times. Paired with a subwoofer, the ES1 tower speakers shine as an attractive and affordable home theater main loudspeaker with superb build quality and aesthetics for a reasonable asking price.

The CM10 is the new flagship of Bowers & Wilkins CM line of speakers. So what does an extra $1000 over the $3k price tag of the CM9 get you? How about upgraded tweeter and midrange drivers? Is that enough? No? Ok, they also offloaded the tweeter to the top of the cabinet, decoupled the midrange, and added a woofer. Is that worth a grand? What if we told you that you'll get more than a 10Hz increase in extension on the bass end and that the new tweeter design promises even less distortion and more dispersion than the CM9? No, don't get your checkbooks out (seriously, you still write checks?), the B&W CM10 floorstanding speakers don't start shipping until August.

The CM10 is the new flagship of Bowers & Wilkins CM line of speakers featuring an upgraded tweeter and midrange, more extension, a top-mounted tweeter, and more for only $1k extra than the CM9.

Inexpensive. That's the first word that comes to mind when I think of Fluance. For those unfamiliar with the name, Fluance was established up in the Great White North (aka Canada) in 1999, and since their debut they have been known for building extremely inexpensive but good quality loudspeakers. The speaker we'll be looking at today is the Fluance ES1, a slim floorstanding model priced at $450/pair and boasting a quartet of woofers per side. While not exactly dirt cheap, the ES1 appears to pack a lot of punch for the dollar. How does it stand up to a cursory examination from the Audioholics? Read on to find out.

Sporting a quartet of woofers and a silk dome tweeter in a slim aluminum enclosure, the Fluance ES1 Floorstanding Speaker seems to deliver a lot for the dollar. Read on to see how we think it rates.