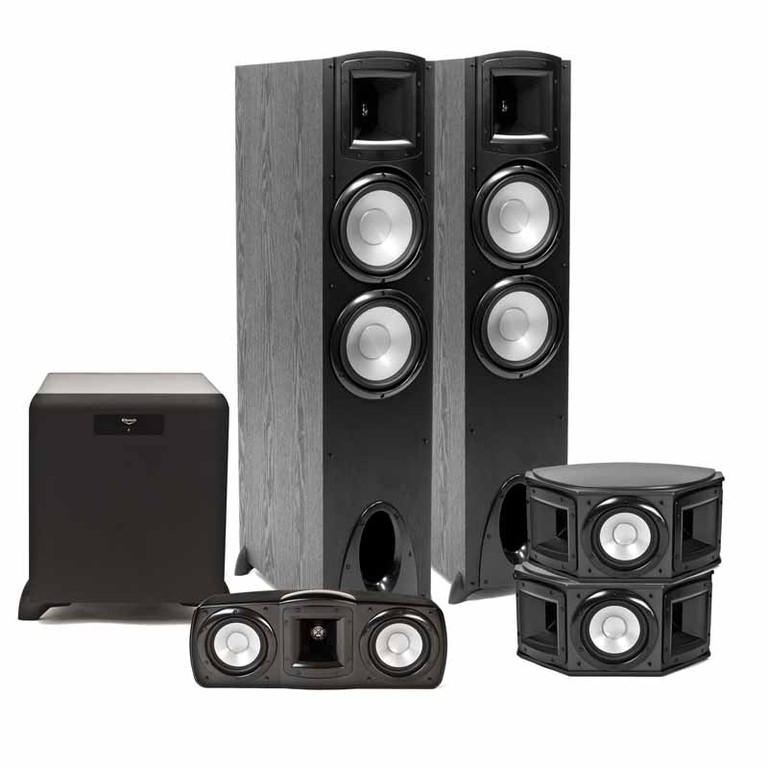 We review speakers from a variety of manufacturers, however Klipsch is one of the top-selling brands in America. The reason for that is they make products which play loud and have plenty of bass. They also have an incredibly good presence in both the custom installation and brick and mortar channels. Klipsch is everywhere. Of course, so is Bose, so it begs the question: Is a new Klipsch Synergy Series F-30 Home Theater Speaker System really something to get excited about, or not? We've played around with Klipsch in the past, even including the speakers in our most recent tower speaker shootout, and honestly they did really well. This time around we were looking at the new F-30 Floorstanding speakers, along with a full complement of surrounds, a center and a new S-110 10-inch subwoofer. That's a pretty nice matched system - and for around $2360, it's at a great price point for those looking to get into some serious 5.1 surround sound.
Next Page ⇨

Hey all, thanks for the tips here.
I finally exchanged my (Klipsch) KW-100 with an SW-112 subwoofer to better match my pair of Klipsch Synergy F-30's,
…and the difference is audibly noticeable. <- jaw-dropping !
I also heard an SW-110, and I'm confident it too could have easily done the job, but since I'm just running a “2.1” setup right now, the SW-112 and the Marantz CD6004 was the affordable limit, it all fit the bill nicely, for now.

The previous “KW-100” paired with the “F-30's” was just a bad package deal from BB (BestBuy), but that was my fault, haha, but thats ok, I'm learning quick about sub's.

Instead, Front -> “Large”, and (sub)Bass Out -> “Both” on the Yammy, provided the best sound for us.
- definitely gonna try and get a “YPAO” mic to help balance our rooms though.

No doubt, there is even bigger and better out there, but right now, for wifey's Opera, and our Jazz, and Blues, we have NEVER had it so good, sound-wise.

markw, post: 924973
For what it's worth, we have a “rickster71” posting here for several years now and your moniker could easily be confused with his. Since you're new and have only a handful (literally) of posts, i thought you might want to know that.

nope, I'm just another new kid on the block, forum-wise, here that is.

shadyJ, post: 924967
Hey Rickster, if you can swing up to the Klipsch Sw-115, that would be a far more formidable subwoofer. Its something to look into, anyway.

I hear you bud, and I'd luv to, but “could” is the word money-wise at this point, unfortunately, but we'll see,
EDIT: geeezus, they're well over a $1000.00 here (in Canada) ?! - ouch.
haha.
markw posts on November 20, 2012 13:15
For what it's worth, we have a “rickster71” posting here for several years now and your moniker could easily be confused with his. Since you're new and have only a handful (literally) of posts, i thought you might want to know that.

agarwalro, post: 924678
Maybe the recording does not have the kind of bass you are expecting. Do you get the desired slam when playing techno or movies known to have good LFE use?

Hi,
and sorry to keep you guys off-topic here, but ya, I was trying a few different bass-filled CD's as well as downloading/burning some extremely heavy bass mixes, and it felt/heard like the KW-100 couldn't quite keep up with the F-30's, they felt like they were clipping/flapping ? -sry for the poor adverbs here.

So, I'm doing what I think is best at this point, (since I don't have a “YPAO” for AUTO sound alignment), by throwing a hopefully “better” sub at it, (Klipsch SW-112), and hear it all again, and again, and again, …
Gawd, I guess I'm just throwing money at it, which I agree, is a bad way to “…process of elimination…”