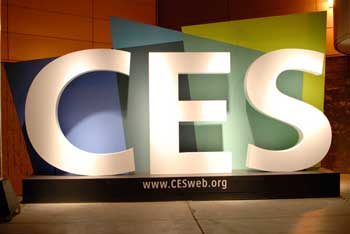 We love CES. It's a time of new gadgets for all things audio and video... and more. We're committed to bring you some of the best coverage, including the hottest items and, in particular, those things which most affect the home theater industry. In 2012 we have yet to identify that "next great thing" but it's certain that streaming media is dominating the thoughts of manufacturers everywhere. Blu-ray is taking a back seat and thin TVs are the talk of the town, with OLED making its way to the front stage for the first time since it was first brought up at the show several years ago. This is by far the largest trade show of the year for all things electronic and CES is one of the hottest times of the year to get your AV fix of news and product information. Stop by throughout the day as our coverage explodes and expands to bring you the hottest items and the newest technology announcements!

The Latest from the Floor

The GW3DHDKIT Wireless 3D Digital Kit from IOGEAR is really meant for a second display. Supporting full 1080p and 3D, it makes it very easy to send your high definition content to a second room.

The iLuv Mo'Beats is a truly wireless speaker (lithium-ion powered) with a wireless (bluetooth) or wired (3.5mm) connection to your device, the Mo'Beats will hold your device while you use it.

The TEAC Distinction line certainly seems to be well thought out and well matched to each other. The CD-3000 with its 192kHz upsampling before decoding and dual differential DACs has us excited.

Regardless of your needs, the Paradigm Cinema Speakers has a solution for you. Especially on a budget. With 5.1 systems starting at $1000 and tons of upgrade options, users should find all they need.

The new Distinction series from TEAC appear to be a nicely crafted, high performance audiophile line of integrated amplifiers ranging from 85wpc to 200wpc and stable into 4 ohms.

The Cables to Go TruLink High Speed HDMI Active Optical Cable has a USB breakout cable at the display end to power the cable. This allows for very clean installations with runs up to 100 feet.

The Focal XS Book speakers look a little too good to be true on paper - but that doesn't mean they aren't good. With a .75" aluminum tweeter, 4" polyglass woofer, and front port, a listen is warranted.

iLuv MobiDock for Kindle Fire and MobiAir for Smartphones Preview

The iLuv MobiDock for Kindle Fire and MobiAir for smartphones have a omni dock system that supports devices of any size, a feature sure to lure many consumers. The Kindle name alone is enticing.