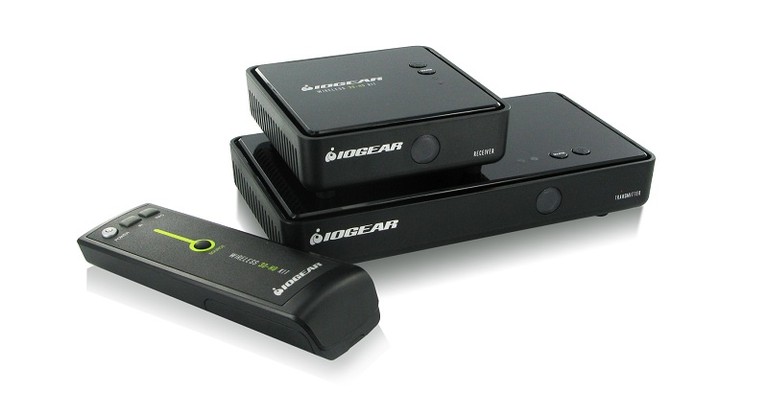 We are finally getting to the point where people have more than one high definition television. They bought one a few years ago at a Black Friday sale and, while it was a fine TV, they've come to realize that sitting 12 feet from a 37" screen makes for a less than impressive experience. So, for Super Bowl Sunday (or maybe just because they found a good deal) they've upgraded. But that means they have an "extra" TV. Sure, they can probably get another cable box for watching TV but is that going to be enough? Enough when they have their Blu-ray player, DVR, and lord knows what else in their main room?

No, what they need is some sort of way of sending their HDMI content to their second TV without having to buy a bunch of wires or repurchasing more Blu-ray players or renting more DVRs.

IOGEAR has understood this new need and has released the GW3DHDKIT Wireless 3D Digital Kit. The kit comes with a larger switcher/transmitter and a smaller receiver box. Both require external power and, it seems, only one receiver can be connected to a transmitter.

There are a few interesting features of the GW3DHDKIT Wireless 3D Digital Kit. To start with, the transmitter has two inputs and a single output. This allows you to swap between inputs and place the transmitter between your receiver (or main source) and your main display. The output is a loop-through so that the local display gets everything it always did. The GW3DHDKIT Wireless 3D Digital Kit then sends most of the same content wirelessly to a second display.

The IOGEAR GW3DHDKIT supports 1080p and 3D video as well as 5.1 audio (sorry, no 7.1 and no word if all the latest high-def audio formats are supported). The GW3DHDKIT Wireless 3D Digital Kit uses the 5GHz band (think 802.11n as opposed to the newer 60GHz WirelessHD or WiMax formats) for wireless transmission and will (theoretically) operate up to 100 feet through normal walls. Of course, that distance will vary depending on your environment. The 5GHz frequency range isn't as congested as the ever popular 2.4GHz band so interference should be minimized. Still, individual results will vary and the higher bandwidths have so far proven to fare better in this application.

The GW3DHDKIT Wireless 3D Digital Kit has an IR input (transmitter side) for easy integration with custom installation integration. It is fully HDCP compliant so users won't have to worry about compatibility issues. We're a little confused as to why IOGEAR is not allowing multiple receiver pairing. While it is probably a rare need, it doesn't seem like it should be much of an issue from a technology side and may lead to additional receiver sales. Given that the GW3DHDKIT Wireless 3D Digital Kit will be sold through Costco (only online initially, brick and mortar roll-out to follow), additional sales from DIY'ers is likely. At $379.95, the GW3DHDKIT Wireless 3D Digital Kit isn't the cheapest on the market but it will be easily available and full featured enough for many applications.

The GW3DHDKIT Wireless 3D Digital Kit from IOGEAR is really meant for a second display. Supporting full 1080p and 3D, it makes it very easy to send your high definition content from one room to another. While it could be used in a room to send to a main display (and would be fine as long as you aren't sending anything greater than 5.1 audio), we think it is best utilized to increase the number of places you can see the same content. Pair this with an RF universal remote, and you'll be able to seamlessly walk from one room to another with your content following you. Now all you have to worry about is finding your remote.