What Matters Most in Speaker Cables? 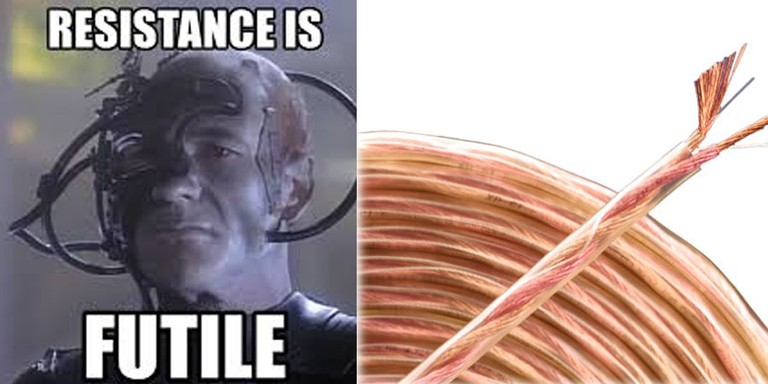 It’s been awhile since I last wrote a technical article on cables. Lately we’ve been getting hit with the common question “what speaker wire gauge should I use” or "what matters most in high performance speaker cables"? Is there a difference between 12AWG and 18AWG wire?  The short answer is Yes. The higher the gauge, the more resistance. In this case, it's usually best to follow the advice of the Borg "resistance is futile". Audiophiles should always wish to minimize speaker cable resistance. Read on to learn why.

American wire gauge (AWG) is a system of numerical designations of wire diameters where the thicker and less resistive the wire is, the lower the gauge number. More often than not, we’ve seen Audiophiles choose a higher gauge esoteric wire over a lower gauge generic zip cord cable simply because they were sold some marketing nonsense from the exotic cable vendor that their wire will yield higher dynamics and better Mojo from your system than standard generic cable. Don't believe me? Check out some of the "midpriced" speaker cables from the likes of Audioquest and Nordost as example and you will see they are anywhere from 16-18AWG. This is much higher resistance than cheap 12AWG zip cord cables you can buy at a local hardware store. To see this graphically, note the resistance vs gauge table below.

..the dominant metric of concern is DC resistance in speaker cables.

Only the truth will set you free, so its time to clear your head of marketing slogans and get a good dose of reality about the single most important aspect of speaker cables – RESISTANCE. Anytime you are driving power into a low impedance load such as a loudspeaker, the dominant metric of concern is DC resistance (measure of restriction of conductivity in a circuit). Certainly there are secondary concerns which are also important such as inductance, and capacitance. But, as we’ve proven in our various cable articles and reviews, if you cannot first select a cable with low enough DC resistance, the losses will be so great between the amplifier and loudspeaker that all other cable parameters will become a wash. This article will focus solely on cable resistance and will serve as a guide for choosing the right wire gauge (AWG) for your installation to ensure you realize the maximum potential of your setup.

The two primary things resistance affects in the amplifier-to-loudspeaker connection are: insertion loss and damping factor, both of which are dependent upon cable resistance.

Insertion loss is the measure of the loss of load power at the speaker due to excessive resistive losses of the cable or any additional component attached between the amplifier and the loudspeaker. We typically express this loss in decibels (dB) using the following formula:

Note: For simplicity's sake, we will assume the output impedance of the amplifier is zero which represents an ideal amplifier.

What happens when you have too much insertion loss?

You will experience power loss in the speaker cable resulting in the speaker not playing as loudly. But it takes a whole lot of loss here to become audible. For example, it would take nearly 1 ohm of cable resistance to drop the signal level down 1dB for an 8 ohm speaker. More importantly however, as the series resistance caused by the speaker cable increases, it makes the amplifier look more like a current source which will in turn cause the speakers frequency response to follow the rise and fall of its own impedance curve. This is particularly more prominent in some class D amplifiers whose response changes more significantly with varying load impedance.

In order to minimize the potential of audibility here, I have established a guideline of the maximum acceptable degree of insertion loss that a cable should present to the system so that when a real world amplifier and loudspeaker are connected, the cable resistance will have a negligible contribution to the overall system response. I plotted the Insertion Loss (dB) vs Distance (ft) for various cable gauges from 18AWG to 10AWG using an 8 ohm speaker load.

If you are truly concerned with top notch fidelity, then: As you can see in the graph, once your distances exceed about 10 feet, you should consider speaker wire 16AWG or lower. If you are using a loudspeaker that is rated at 4 ohms, the critical distance becomes about half that. It is really important to use thicker wire for long cable runs, especially when driving a lot of power into low impedance loudspeaker systems.

What happens when a system exhibits poor damping factor?

Damping factor is often an abused term in the industry much like contrast ratio is in video. Beyond a certain number, it becomes meaningless. The problem however is when the system damping factor is too low, it will have an effect on system linearity and again cause the same issues we noted with excessive insertion loss and speaker frequency response variation. If the source resistance is extremely high, it can be noticed audibly by boomy bass response.

In order to minimize the potential of audibility here, I have established a guideline of the minimum acceptable System Damping Factor between a cable and a loudspeaker so that when a real world amplifier and loudspeaker are connected, the cable resistance will have a negligible contribution to the overall system response. I plotted the Damping Factor vs Distance (ft) for various cable gauges from 18AWG to 10AWG using an 8 ohm speaker load and correlated the results with the data we gathered on Insertion Loss in Figure 1.

If you are truly concerned with top notch fidelity, then:

As you can see, lower the speaker cable resistance greatly improves the system damping factor and allows you to run longer lengths without being penalized with significant losses.

Tabulated below are the recommended cable distances (+20%) one should use for various speaker cable gauges and speaker loads.

Read: What is Loudspeaker Impedance? for more information about this topic.

Realize once you attach a real world amplifier (non zero output impedance) and loudspeaker (reactive load), the overall system losses will be greater but the goal here is to ensure the speaker cable is as transparent as possible.

never sacrifice low cable resistance for an elaborate design that promises to solve a problem that doesn't exist.

Cable inductance, AC resistance due to skin effect (to a much smaller extent), will further increase these losses but they are secondary concerns to primary DC cable resistance. Although I have measured some exotic cables to produce proportionally lower AC resistance than ordinary zip cord, most of these cables had such high DC resistance that even at the frequency extremes; standard 12AWG zip cord had lower overall resistance!

See: Speaker Cable Face Off II for further reading on this topic.

What About Braided Cables?

Braided cables utilize multiple individually insulated conductors (usually 22-26AWG) twisted in a pattern that helps to reduce series mutual inductance but usually at the expense of increased capacitance. Remember anytime you bring conductors closer together, the inductance gets reduced but capacitance goes up. I do appreciate these type of cable designs if they aren't overly blown out of proportion with high capacitance needing a zobel network termination to prevent amplifier oscillation for long runs. Braided cables are a fine choice provided that you aren't sacrificing resistance for the design. Some of my favorite braided cables are the mid priced cables like the 8PR or 8TC from Kimber Kable. However, some of their more expensive cables like the Bifocals exhibit lots of capacitance and are not something I'd recommend for very long runs especially because they are quite cost prohibitive and NOT worth the expense for no sonic benefit, in my opinion.

Let me make it clear that the cable length guidelines I set forth here are done so for audiophiles whom are particularly critical on system performance and transparency. For casual listeners or installers setting up distribution whole house audio, you can certainly run cable lengths much longer than I recommend in Table 1. The degree of audibility of running cables longer than these lengths depends on the quality of electronics and loudspeakers, neutrality of the room, and sensitivity of the listener.

I personally run 10AWG speaker cable for all of my audio systems in the Audioholics Showcase home. The only issue here is this cable tends to be hard to work with and terminate. 14/4 cable is another good choice that is easier to terminate and has an effective gauge of 11 AWG. Choosing quality cables from reputable sources such as Blue Jeans Cable and Monoprice is a good idea. I always recommend you avoid snake oil when purchasing cables. Otherwise you'll likely find yourself spending more money than you should on nebulous claims and fancy packaging. To add insult to injury, you may also end up compromising on the parameters that actually matter, such as wire gauge.

Use the recommendations in this article as a guideline and NOT a biblical source. There is no magic number when choosing what gauge to use over a specific distance since the system dynamics are often too complex. But, if you’re choosing between two cable gauges, I usually recommend going for the lower one (all other things being equal) to ensure your cables won’t be the chink in your audio chain for pursuing audiophile nirvana. Being an audiophile often means a bit of overkill on your part and that's ok.

Remember, never sacrifice low cable resistance for an elaborate exotic design that promises to solve a problem that doesn't exist. Many exotic cable vendors promise you the moon but deliver cheese.

My personal cable picks include: