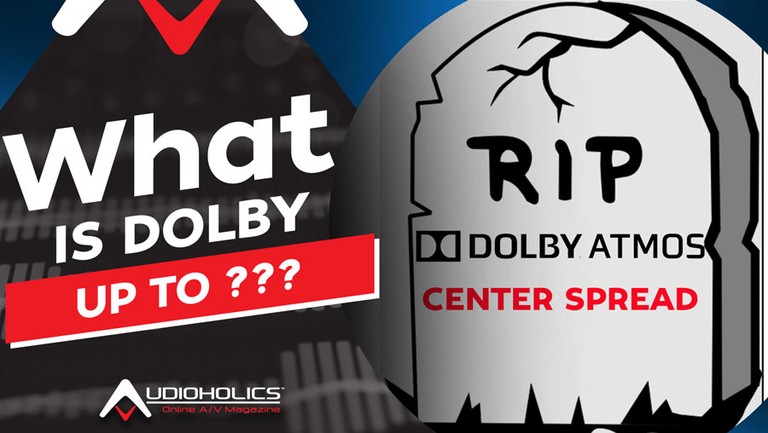 When Dolby released Atmos, it was done in concert with an updated surround upmixer, replacing PLIIx Music and Cinema modes for what they called the Dolby Surround Upmixer (DSU). The DSU was suited for music and cinema and worked best for 2CH music when a feature called "center spread" was enabled. "Center spread" allowed the listener to preserve stereo imaging from the front channels for 2CH sources. Without it being engaged, too much common sound from the FL/FR speakers is sent to the center channel making the end result too narrowly focused sounding and artificial to most listeners.

The DSU for 2CH Music Enhancement

As a fan of upmixing my 2CH music collection, I personally found the DSU does a great job expanding the stereo soundstage by employing ALL of the speakers in my surround system, including the center channel at a greatly reduced level. In fact, if you properly time-align the center with the mains in your primary listening seat, you can match the phantom center created by just two speakers so that it sounds seamless when turning on the DSU with no penalty to front stage imaging. In contrast, the DTS Neural:X upmixer has no "center spread" feature nor a mode suited for upmixing 2CH music. In my opinion, the DTS:X upmixer is absolutely dreadful sounding for upmixing 2CH music and it's a real step backwards from their prior DTS Neo:X upmixer which had separate Music and Cinema modes for this very reason. I pretty much wrote off using the Neural:X upmixer for music which was of no consequence since we have the great Dolby DSU for that very purpose. Until now....

I recently recommended a Denon AVR-X3600H 9.2CH AV receiver to my brother who was looking to upgrade his surround receiver. After he had it all set up and dialed in, he called me to complain that his streaming music from Pandora and Tidal was dumping too much sound to his center channel and it didn't sound right. Alas, I knew the fix. All he had to do was engage "Center Spread" when the DSU was engaged. After instructing him how to do this, I sent him on his way only to get a second call from him the next day saying he couldn't find the feature. Realizing my brother isn't the most technically proficient DellaSala, I facetimed him to show him the menu procedures in my Marantz SR8012 which has a similar GUI to the Denon AVR-X3600H. I was perplexed that I could NOT find that feature on his AVR. I instructed him to email Denon tech support and the next day he got a reply stating that the "Center Spread feature has been eliminated by Dolby in ALL licensed products from 2020 and beyond". I was stunned by this revelation but confirmed it was true. In fact, I also received feedback from a fellow Audioholic that his Pioneer receiver went through a recent firmware update and he noticed the "center spread" feature was eliminated. This reminded me of the Dolby Restricting Non-Native Upmixing on Atmos Based Products revelation that we uncovered two years ago. It seems Dolby is at it again but this time it makes no sense since the "center spread" feature is a useful tool to music enthusiasts wanting to enjoy their 2CH music upmixed with the DSU.

I tried my best to phone Dolby but was unable to reach anyone of consequence that could give me a straight answer of their reasoning behind their decision to remove the "center spread" feature from their licensing agreements with manufacturers. So, I sent them an email to inquire. I got a canned response from their PR that basically suggested that discrete 5.1 music should be listened to with the DSU for best results. OK, I agree with that, but what about the 1000s of music files, and CD's we all have in our collections? What about the fact that NO streaming service to date offers anything other than 2CH music in a home theater environment? Don't come back and say Dolby Music is available in Atmos on Tidal or QoBuz, because it ISN'T. They are currently only streaming in virtualized surround through headphones or the Amazon Echo Studio Speaker.

A Call to Action It's clear that Dolby has recently updated their licensing agreement to remove the "center spread" feature from consumer audio products going forward with new products as of 2020. We don't understand the reasoning behind this but we implore you to voice your concerns to Dolby and your favorite receiver manufacturer if you feel this to be an important feature for your music playback enjoyment. Perhaps we can all be part of a collective voice to persuade Dolby to restore this feature similar to how we got Dolby to recant the restriction of non-native upmixing on Atmos products last year. Let's get it back and make 2CH music upmixing great again!

In the meantime, for those wanting to enjoy 2CH music through the DSU on their AV receivers without the "center spread" feature, we recommend separate trim level adjustments that knock the center channel level down to your taste. On Denon/Marantz products this can be done via the quick/smart select feature where you may toggle a separate channel level and surround mode preset on the fly with a button press.

Tell us how you listen to your 2CH music. Do you go "pure direct" bypassing all DSP processing and upmixing, or do you enjoy hearing it through ALL of your speakers via the DSU or ALL channel stereo mode?

You have to be on Dolby Surround with memory guard off. Then you go to menu then dsp and toggle up to Dolby Surround and click it. There you can turn center spread on and off.

You could leave center spread on for DSU and use DSU for music upmixing and NeuralX for TV upmixing if you want memory guard enabled.
flamingeye posts on July 03, 2020 11:54
I contacted Dolby and they said they have not eliminated center spread , but I should contact my AVR manufacturer if it's missing they have control on implementing it or not . so I guess it's up to the AVR company's if we get center spread or not
AcuDefTechGuy posts on June 17, 2020 07:06

Auditor55, post: 1398858, member: 76893
Well if the industry had open up their collectives minds for a change, we could've had what I think is a better approach to immersive audio, which is Auro-3D.

I will lament the missed opportunity to a more practical approach to immersive audio in the home.

That’s call “hanging bookshelves OVERHEAD” like grapes hanging from the vines, which he said he does not want either.

And most audio “experts” would not recommend placing the front main speakers that close to the walls and corners as pictured by Auro3D.
Trebdp83 posts on June 16, 2020 22:02

Auditor55, post: 1398859, member: 76893
Vinyl is not back, it just a fad among mostly hipsters and some millennials. DVD, Blu Ray and UHD Blu Ray obituaries are being written.

Auditor55, post: 1398858, member: 76893
Well if the industry had open up their collectives minds for a change, we could've had what I think is a better approach to immersive audio, which is Auro-3D.

I will lament the missed opportunity to a more practical approach to immersive audio in the home.

Hahahahahaha!
Yeah right. You wouldn’t have adopted that either, and said the industry should’ve gone with Atmos……..
Object based audio is far superior(read: has the potential to be if mixers figure out wtf they’re doing).
Post Reply