Dolby to Restrict Non-Native Upmixing on Atmos Based Products 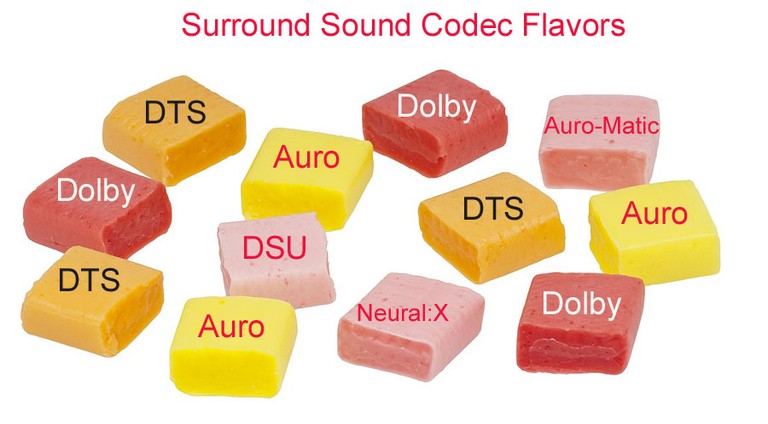 Variety is said to be the spice of life. Why only eat cherry Starbursts when you can sample orange, watermelon, lemon, etc? The same applies to multi-channel surround sound upmixers. But the folks at Dolby® apparently want you to eat ONLY one flavor. Their flavor.  We recently got wind of a new Dolby mandate that restricts how you will be able to upmix native Dolby content that will take effect on all NEW Atmos-based products (ie. receivers, processors and soundbars) coming in 2019 and current 2018 products that are able to receive firmware updates.

What does an Upmixer do?
An upmixer takes an audio signal (let’s say two-channel stereo) and upmixes it to utilize all of the speakers in your setup (perhaps 5.1 or 7.1). At the same time, an upmixer uses complicated algorithms to extract audio information in the audio signal so that the audio sounds like it was mixed for multichannel audio.

Today, with the advent of 3D, immersive audio technologies, upmixers from Dolby, DTS®, and Auro®-3D can take an audio signal and upmix them into a full immersive audio experience (ie. 7.1.4 or beyond).

As you’ve probably guessed, not all upmixers are created equal. Even today’s sophisticated upmixers from Dolby, DTS, and Auro-3D sound different with some enthusiasts preferring one over the others.

Not too long ago, we had two flavors of Dolby PLIIx and DTS Neo:6 upmixers, each tailored for music and movies. You could take a two-channel music source and transform them to 7.1 by applying either of these upmixers to bring new life and ambience to your recordings. Once more you could mix and match upmixers to non-native formats. For example, you could overlay a 5.1CH DTS-HD-encoded movie in Dolby Prologic IIx to expand to a 7.1 soundfield or upmix a 5.1CH Dolby TrueHD source to DTS Neo:6 Movie mode, again for a 7.1 experience. This was further expanded to 9.1 via Dolby PLIIz and DTS Neo:x, respectively.

As the industry evolved to immersive surround sound, we saw the old upmixers go away on most products with the exception of Yamaha. Bless their hearts, Yamaha still lets you use the old Dolby and DTS upmixers in addition to their latest immersive ones, at least on 2017 and earlier Atmos/DTS:X receivers and processors. This is useful for directly comparing the sonic differences between the DSU vs. PLIIx, for example, as I have been doing on my Yamaha CX-A5100 AV processor.  Denon, Marantz and most of the other major players, however, don't give you this option. You've got the DSU for Dolby and DTS Neural:X for DTS and Auro-Matic for Auro-3D on Denon/Marantz receivers. However, on most products, you can still mix and match upmixers with various 2D decoders (ie. TrueHD, DTS-HD) by applying the DSU to a 5.1CH DTS-HD sound track, for example.  If you happen to have an Auro-3D processor, you likely can still play back native Dolby Atmos or DTS:X material through the Auro-Matic Upmixer. Auro-3D actually sits on top of a DTS audio layer and thus DTS:X will support Auro-3D’s speaker layout so that you can run both concurrently.

Isn't this great? Just like with a pack of Starburst, you've got a variety of flavors of 3D surround upmixers to use on top of native 5.1 codecs to expand the soundfield to 7.1 or 7.1.2 or even beyond. Well, that's all about to change.

Dolby Changes The Game With Mandate To All Licensing Partners

The ability to mix and match upmixers appears to be in danger. Here at Audioholics, we got our hands on a copy of a new mandate from Dolby that was recently sent to ALL of their licensee partners with the following guidelines:

Note: This includes carry over devices from previous years in CY 2018.

Interestingly, Dolby will permit 3rd party upmixing and/or surround virtualization of channel-based codecs that support Dolby Atmos rendering as long as the 3rd party doesn't license their own upmixing technologies to 3rd parties.  In other words, you can't upmix a Dolby signal with a DTS:X or Auro-Matic upmixer but if you own a Yamaha receiver or Logic7-based Harman processor, you can still overlay their proprietary DSP over a Dolby signal. For example, if you have a Dolby TrueHD source, you can't use the DTS or Auro-Matic upmixers in conjunction to height virtualize the signal. Yet, you will be able to throw on a DSP mode to the signal that potentially mucks up the mix to sound like bathroom halls at a German Cathedral in Munich. This is a bit peculiar that Dolby would allow post-processing on their signals when in fact they are allegedly restricting usage of other codecs to maintain quality control. However, they recognize that some licensee's may develop their own overlaying code to expand the sound field.  Currently, Dolby’s consumer version of Atmos stops at 9.1.6 on most products that rely on mass produced chipsets, and many UHD Blu-rays are restricted to 7.1.4 thanks to the movie studios shortsightedness.  So without post-processing, some of the speakers in a multi-speaker set up exceeding these channel counts may go unused. Some companies like Emotiva, are planning on using their own DSP algorithm (RMC-1 processor) to expand their surround field beyond 9.1.6 which thankfully Dolby will still permit even after this mandate takes effect.

Note: Maintaining native format and upmixing is something that has always been in the Dolby guidelines for licensees, but apparently never enforced until now.

One has to ponder just how far this mandate will restrict upmixing in future Atmos-based products. Will the user still be able to apply the DSU to non-native Dolby audio streams? If, for example, your source is encoded in DTS HD, it's unclear if Dolby will restrict the use of the DSU to upmix and height virtualize the signal to take full advantage of your full immersive surround speaker layout. Or will the user be restricted to use the DTS:X upmixer for DTS encoded material, which we've had less than stellar results with in our testing thus far, especially for music?

Why is Dolby Issuing this Mandate to its licensees?

I believe Dolby maybe enforcing it in future products that bear its logo for two reasons:

Let's face it, Auro-3D has a large installation base in Europe and a very small presence in the United States. Auro-3D is practically giving their licensing for free to Denon and Marantz to stay alive in the consumer marketplace. I don't think Dolby was ever happy about sharing marketspace with Auro-3D, especially considering that their speaker layouts are incompatible.  Therefore, any user who installed a dedicated Auro-3D theater or speaker layout may now be in store for an inferior home theater experience.

Dolby certainly doesn't want to share the consumer marketspace with DTS either. Dolby lost the audio battle to DTS with Blu-ray and may be taking a different, more aggressive stance with their current lead in 4K/UltraHD Blu-ray.

But that begs another question: If Dolby truly wants to maintain quality control, why would they still allow 3rd party DSP overlay of their signals which can potentially do more harm than having a competitor codec do the upmixing?  Dolby is either being extremely generous to its licensee partners by allowing them to offer processing enhancements to increase the appeal of their products or they really want to win the no-win scenario by changing the conditions of the test - eliminate the competition. Just like Dolby monopolized licensing the Atmos-enabled bouncy house speakers, it is quite possible they are also trying to monopolize surround codecs for consumer audio products too. As a Star Trek fan, I have to wonder, is Dolby pulling a Kobayashi Maru?

What about 2-Channel Music?

As far as I can tell, consumers will still be able to use whatever upmixer they want for 2-channel sources. This non-native upmixer restriction applies only to discrete multi-channel content. So if you're streaming DD 5.1 from a FireStick or AppleTV, you'll be able to upmix it with the DSU but not the DTS:X or Auro-Matic upmixers.  Of course, a workaround would be to change the output of the source from bitstream to PCM. But, there can be tradeoffs in performance in doing so, depending on how good the transcoder is in the source device.

I recognize that Dolby is trying to maintain the quality of the listening experience and deliver Atmos branded content in a consistent and reliable manner. Dolby doesn't want companies making money reselling "aftermarket" up-mixers based on their intellectual property. If you’re a licensee of Dolby, you are free to post-processing to enhance the attractiveness of your product as long as you are not selling it as a standalone “product” designed to compete with Dolby.

But, anytime a company mandates a technology restriction, we need to ask ourselves what will the implications be on the consumer? As audio and home theater enthusiasts, in my opinion, any restrictions on our choice sets a bad precedent. If Dolby is bent on having customers experience their audio encoding with their codecs then a better approach would be to have licensees default to the Dolby codec (like they do now) but still allow the user to manually change it if they prefer. We have to wonder once this Dolby mandate takes effect if DTS will follow suit and place the same restrictions on their codecs too?

What do you think about this? Do you mind giving up some of your codec flavor choices or are you content with just the Dolby flavored one? Is this a necessary move by codec licenser Dolby to maintain quality and will it make for an easier user experience, or is it an unnecessary restriction placed on consumers and nothing more than a way to force out the competition from rivals DTS and Auro-3D?