Krell Introduces $4000 Worth of iPod Overkill 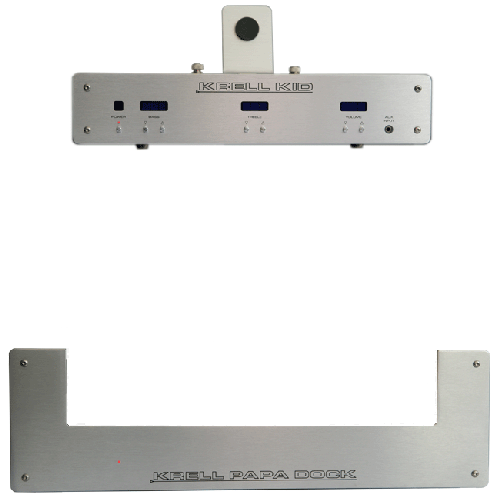 Look, it fits so perfectly.

Krell Industries, long known for manufacturing monstrously (can we say that without getting sued?) large power amplifiers and audiophile electronics has jumped on the iPod bandwagon with the introduction of the $2500 Papa Dock power amplifier to compliment their $1500 Kid Dock iPod dock.

Introduced last year, the Krell Interface Dock iPod dock allows one to connect an iPod and nothing else for glorious pre-amplification of everyone’s favorite source of potentially compressed (read non-audiophile) audio entertainment (yes we know you can store lossless audio on there too). Equipped with a single iPod input, choice of balanced and unbalanced audio outputs, and composite and s-video outputs for enjoyment of highly compressed video on a larger TV, the device is a pinnacle of audiophile simplicity. There are no other inputs, circuitry, or switches to foul all the compressed audio glory of the iPod.

According to Krell, it’s quite a bargain:

Traditionally, Krell Industries, Inc. designs and manufactures high performance audio and video equipment for serious music enthusiasts and home theater aficionados. In a break from tradition, the new Krell KID gives the iPod-device listener high quality music at home, at an entry level price that is an astounding value, far below the typical entry level price of a component from a high performance audio manufacturer.

Note that the highlighting was provided by Krell.

To complete the iPod audiophile experience, Krell has recently introduced the Papa Dock to dock the Kid Dock iPod dock.

The Papa Dock is a dedicated 150 watt per channel power amplifier for the Kid Dock with a 450 watt, 40,000 microFarad power supply and physically isolated left and right channels each with discrete direct coupled topology and twelve high current output devices. I hope that is enough to handle the demanding dynamic range of lossy audio compression.

With no clear indication that the Papa Dock has any other connectivity options than to connect to the Kid Dock, it looks to be an equally flexible audio investment. Hopefully Apple doesn't get a bug up their *** to change the interface geometry or electrical configuration.

On the bright side, I bet the Kid/Papa Dock combo makes for an outstanding paper weight.

Now if you are wondering why anyone would spend that kind of coin for a pair of devices that have no other apparent functionality besides, for the moment, iPod docking, you are not alone.

Seems that four grand would go along way towards a normal high end preamp/amp combo with at least a couple of inputs and perhaps still have some cash left over for an esoteric gold plated skin effect resistant stereo 1/8” mini-plug to RCA cable that would get the job done just as well.

Anyways, I seem to recall that this is the type gear that Apple said could be done away with when they introduced that iPod Hi-fi and blustered on about being it being audiophile quality.

Not at all. It makes it expensive for them. You don't have to buy one of these. In fact I would recommend you not buy one regardless of how much disposable income you have. A digitial audio streaming device like the Squeezebox is far more useful and flexible.
cubbie5150 posts on July 25, 2008 11:12

mr-ben, post: 437864
My respect for Krell just dropped a little bit. If an audiophile truly wants to integrate the iPod into their system, the Wadia iTransport seems like a much better alternative than this thing.