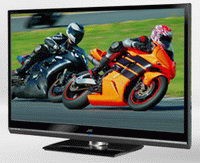 The JVC LT-42SL89 promises to be slim - in fact they promised to be the slimmest LCD display with internal tuners. On that they delivered. But being slim isn't enough (unless you live in LA), the real questions are: How is the picture quality and How well does it work? Well, for the former, it delivers, for the latter, not so much…
Next Page ⇨

I've never been a fan of anything JVC makes.

It's puzzling to me b/c back in the day, they made some fine CRT tvs IMO. I also thought their VCR's were the tops.

They had a few good years with AVR's but later liquidated their audio side of the business. It now seems they are attempting to revitalize their audio side but at a much lower end scale. Companies go through cycles and they are IMO a prime example of it.
GlocksRock posts on August 20, 2008 16:18
I've never been a fan of anything JVC makes.
Post Reply