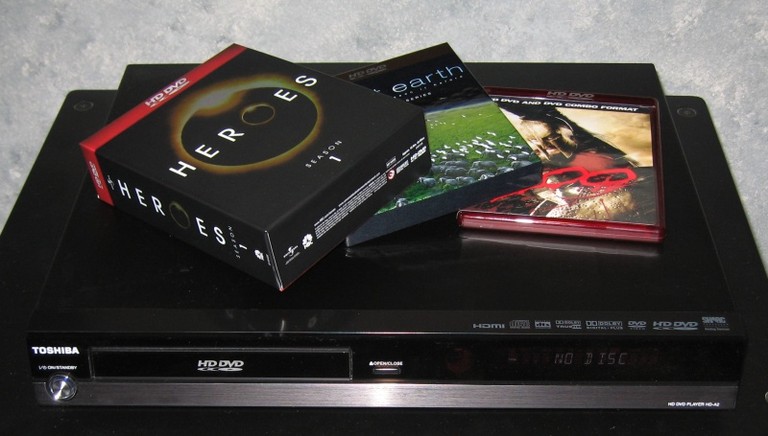 There are numerous other reviews for the A2 floating around the Internet, but sometimes a new perspective is a good thing, especially when this will surely be at a great price point very soon (rumor has it at under $200 by Thanksgiving) when the new A3, A30, and A35 come out the door. The Toshiba HD-A2 is the second generation of Toshiba’s HD DVD players. It is the entry level player and provides output of up to 720p or 1080i. It does NOT however output 1080p. Then again, with 1080i no picture information or resolution is lost or missing from a 1080p/24 source.
Next Page ⇨
Like This? Check out our other Ultra HD Blu-ray and DVD Player Reviews!

autoboy, post: 324690
The panasonics pass all the standard definition HQV tests. but these tests are essentially useless because you are probably not using a non progressive scan DVD player so your TV won't need to do any deinterlacing. You are likely passing it 480p and the TV scales it to it's native resolution and the DVD player does the Inverse Telecine and 3:2 pulldown to create a 480p/60 signal from the 480i/60 signal. If done right it does this by first performing a Inverse Telecine process that can reconstruct the original 480p/24 signal from the 480i/60 signal on the DVD. Then, in order to output it at the standard 480p/60 that your TV can accept, it has to pad the 24fps signal with extra frames to reach 60fps. So, your TV actually doesn't need to do anything special to play 480p and just scales it to your screen resolution. Problems DO occur when people buy these fancy new “upscaling” DVD players and set them to resolutions that do not match their TV's native resolution, resulting in double scaling which can reduce the picture quality. A general rule of thumb without getting into the specifics of upscaling, is to set your DVD player to output 480p and let the TV do the scaling. If your TV is fairly high quality, it will likely do a better job of upscaling the 480p to fit it's native resolution without running into any problems with double scaling, or even worse, when people set their upscaling DVD player to 1080i output and now the TV has to do another lossy deinterlace step that was completely unnessesary. So, just skip these problems and set your DVD player to 480p (progressive scan) output.

On standard cable or digital cable, the TV DOES need to do deinterlacing, but it does not do Inverse Telecine and pull the 480p/24 film matieral out of the 480i/60 signal because most TVs do not have adapative algorithms that determine whether there was actually a 480p/24 signal hidden in the 480i/60 signal. All you can do is turn Inverse Telecine on or off and you don't want to switch it on everytime you think you are watching film based content so everyone just leaves it off. This works fine for most content. So, the HQV tests are pretty useless on TVs except when they test a sets ability to do 480i/60 video based deinterlacing, which most sets now do properly.

Really, this whole thing is a complete mess and should have been standardized better than it was because it took me a year to sort all this stuff out so don't worry if you don't understand anything I just talked about.

Actually the tests were all done by Gary Merson, so I'm pretty sure he knows what he's doing.

It's using the high definition HQV Benchmark discs, not the DVD one, so it's outputting an interlaced test pattern at 1080i.

After adjusting the user controls I began video performance evaluations using test patterns created by a Sencore HD signal generator, the latest HD HQV Benchmark and the new HD DVD version of the Video Essentials disc. Testing revealed the TH-50PZ750 sends the full bandwidth of the source material to the panel. In other words, the Panasonic reveals every fine detail within a high definition program or movie. Though the red and blue color points were very close to the high definition standard, the green was oversaturated. but not as far from the ideal coordinates as other flat panels I have measured.

(Note: the Panasonic press release for this model refers to a “reference mode” but there is no setting as such, so perhaps the TH-50PZ750 is always in this mode. The HD Guru is patiently waiting for an owner’s manual and an explanation from Panasonic, so watch for an update).

The TH-50PZ750 properly deinterlaces 1080i signals into progressive, maintaining all 1080 lines. This was confirmed using the HQV test disc. Measuring brightness levels within Vivid (dealer showroom) mode maxed out at a blazing 57.5 ft lamberts. With the user controls (Custom mode) adjusted properly, maximum brightness came in at 22 ft. lamberts. This is quite bright for normal in-home lighting conditions. Black level was too low to measure accurately with my test equipment; in fact it was the lowest of any plasma I have tested to date. (This is not a contradiction, I know the spec of my meter’s accuracy and this panel was significantly below that level). The high brightness and low black level create a high contrast ratio, which was evident during viewing evaluations.

There has been a huge increase in the past year in the amount of HD availability. There are now hundreds of Blu-ray and HD DVD titles available, more HD channels are on many cable systems (including my choice, Verizon FIOS) and broadcast television has added local news in HD. NBC, CBS and ABC News in New York are all now in HD.

The TH-50PZ750 placed side by side with the Pioneer PRO-FHD1 made for an interesting comparison. How did the Panasonic’s image look? In a word: WOW. The overall picture quality excelled in reproducing dark and bright level details with a high contrast ratio.

The TH-50PZ750’s color accuracy was the best I have seen on a plasma display and it was the only panel evaluated that produces a true red. Comparing the Pioneer when viewing The Fast and Furious Tokyo Drift on HD DVD clearly showed the difference between Panasonic red and Pioneer red. The same car is red on the TH-50PZ750 and orange on the Pioneer. Ditto for the neon signs and lights of the Ginza in Tokyo at night, where red lights appear crimson versus Pioneer’s orange-y reds. Speaking of night scenes, the Panasonic’s deeper blacks revealed details that the Pioneer (and other plasmas) obscured, as if a veil had been lifted off the Pioneer’s panel.

Jay Leno’s blue sport jacket’s pinstripes provided a fine example of the Panasonic’s superior image. Both panels reproduced the pinstripes; but they were more distinct on the TH-50PZ750. The effect is not subtle; five friends performed the side-by-side tests with a variety of source material. They all picked the Panasonic as the best panel.

In conclusion, the Panasonic TH-50PZ750 is simply the best high definition display I have ever reviewed. With a retail of $3999 and an expected street price that will be even lower, I would also consider it a bargain.

zildjian, post: 325264
How much benefit would the HD-A2 player provide to those of us with HDMI version 1.1 receivers (like my Denon AVR-3806)? The DD+ and TrueHD capabilities in receivers didn't begin until HDMI version 1.3 correct?
If the player converts the DD+ or TrueHD signal to PCM and sent it over HDMI, would that conversion to PCM be at the same quality (96 kHz / 24-bit or whatever the source is) as the lossless signal if sent to a TrueHD or DD+ compatible receiver? Just wondering if we'd be losing out on any audio quality by not having a HDMI 1.3 receiver trying to use HD audio formats.

The door/transport opening/closing is kind of clunky but that's it. I mean, it's just heard while loading and unloading right? I can live with that for sure. The fan noise is not bad for me either. Not audible when source playing and audible from a few feet away in a dead quiet room. All these ‘noises’ are left up to the user as acceptable or not. I personally am not that picky when it comes to these issues mentioned.
patnshan posts on November 05, 2007 14:04

Electone, post: 324951
The A2 downmixes the new hi-rez audio tracks down to 1.5mbps DTS over toslink optical and it sounds fantastic. I run my A2 with analog component video and toslink optical to my Yamaha RX-V2400.

For now, HDMI is not an issue for me.

It's not an issue until you hear the difference. I am glad you are happy but certain you'd notice the difference with the True HD.

Hi Ho, post: 324434
Yes, my HD-A2 passes DD+ and TrueHD to my RX-V2700 with no problems and the audio quality is amazing. The difference in sound quality between standard DVDs and HD-DVDs was truly surprising.

Ditto here. We were actually watching TMNT on HD DVD the other night. I checked the audio settings and didn't realize it was on DD. I changed it to True HD and noticed a HUGE difference. Now I will check every disc before watching it to make sure this is what is selected.