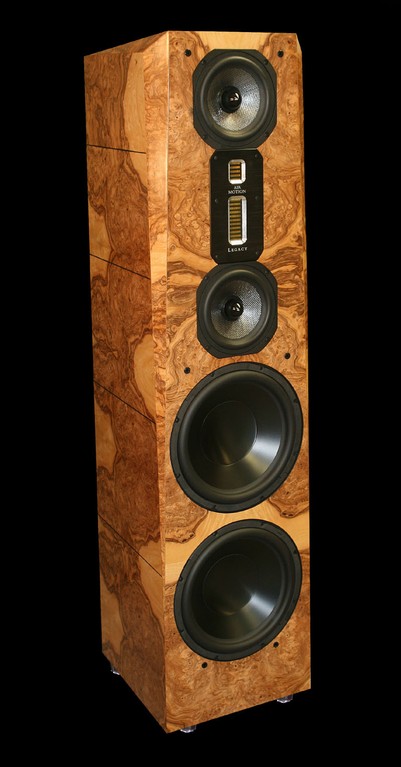 We managed to sit down with Bill Dudleston, founder of Legacy Audio for a one-on-one interview about his brand and loudspeaker designs that have garnered so much industry respect over the years.  This was a particularly exciting interview for me as I’ve been watching Legacy Audio evolve since my teenage years dreaming one day of owning a pair of their finely crafted speakers.  Their core philosophy and no-nonsense approach to loudspeaker design has always resonated with me and has been a personal inspiration to learn more about the art and science of loudspeaker design.

Audioholics: Give us a background of Legacy Audio and how you got into designing loudspeakers.

Bill Dudleston: I began building loudspeakers at the age of 13 and started recording live performances at the age of 16 on my Revox open reel. In my senior year I presented a technical paper on a coaxial loudspeaker design with a low turbulence port and an ambiance system with bucket brigade reverb.

Loudspeakers fascinated me the most as the obvious weakest link in the playback chain.  I studied mathematics & physics while earning a degree in Chemical Engineering at the University of Illinois in 1981. I then worked as chemical plant engineer and managed a digital calibrations lab. I would come home at night and work another 6 hours on audio projects. By 1983, I had founded Legacy Audio with my father-in-law, Jacob Albright, who was a seasoned craftsman.

AH: Where are your loudspeakers designed and assembled?

Bill: Virtually every part is first conceptualized at our facility in Springfield, Illinois. I have an open-door sampling policy with most of the top component suppliers in the world. I often receive evaluation samples of their developing prototypes. Once a Legacy designed part is finalized, I will go out to the best fabricators of that type of part. Since we typically require exotic cone materials, cast frames, etc., a lot of custom tooling is required. We have worked with Eton of Germany, B&C of Italy, Beyma of Spai , Focal of France and other international suppliers as well as Eminence in the States on larger woofers.

AH: Tell us about how your cabinets are constructed

Bill: We fabricate our cabinets in Springfield from 1.125” MDF.  Subwoofers, such as our Xtreme XD, are machined from 1-1/2” MDF while larger towers, such as Aeris & Helix, feature 2-1/4” front baffles which the driver frames sandwiched between two layers.

Our cabinets use interlocking parts, glued and clamped.  Finishes are hand-rubbed lacquer and we source our cherry, walnut and oak hardwoods & veneers from North America.  The exotics come from all over, with the exception of South American Rosewood & the Italian burl woods.  Many hours go into each cabinet.

AH: How important is cabinet rigidity?

Bill: Our philosophy is to brace extensively above and below each driver compartment, which adds mass & increases panel stiffness. With loudspeakers it is desirable to keep the audible contribution of cabinet wall vibration to a minimum. I like to use thick walls (high mass) and a well braced enclosure where cabinet panel displacement is minimized (amplitude reduction).  Thinner panels can be excited at higher frequencies, resulting in more audible effects such as buzzing. I like the qualities of MDF as it is relatively inefficient at transmitting more audible higher frequencies.

AH: What's the process you use in designing loudspeakers?

Bill: I work persistently on driver development. The progress from this development becomes the inspiration for new design.   With passive system design, the woofer parameters can define the enclosure volume and tuning. Many manufacturers define the box size and then make a driver choice.  Since Legacy is almost purely engineering-driven instead of marketing-driven, I rarely design to a price point or box size – performance is the primary goal.

Mostly importantly, a loudspeaker must have a voice.  As a long time recordist, I realize that I am a hypercritical listener.  From our four-thousand CD library I have chosen several hundred tracks that we know very well.  Some are immaculate, some a touch warm, some known to be bright.   I also listen to pink noise (not just measure it) when I voice a speaker. Having tuned tens of thousands of speakers in 30 years, it is extremely useful and familiar as a sonic gauge.  We will refine the voice of a loudspeaker progressively as we gain more and more experience with it in dozens of rooms.

AH: What is your sonic reference when designing and voicing your loudspeakers?

Bill: Piano, voices, percussion, and strings predominantly. We have an 1800 sq ft well-used recording studio at our facility, an isolated vocal booth and a collection of microphones ranging from Lawson’s version of the classic Telefunken 251, the popular studio Neumann U87 to a favorite pair of AKG solid tubes. These microphones represent what the top recording engineers rely on as references. We record instruments as naturally as possible and with simultaneous playback in a well-designed listening room. This immediate and direct comparison is key to the voicing of all of our loudspeakers. We want to be sure to capture the attack of a cymbal but also the rolling shimmer that identifies the metal from which it is struck.  Getting bass attack and decay right can require extraordinary methods.  I have a simple recording I made of a basketball being dropped on a wooden floor that reveals a great deal regarding system damping.  It’s tough to beat familiar sounds as a reference.

AH: Some manufacturers swear by designing and measuring speakers in an anechoic chamber. What are your thoughts on that?

Bill: While I have used anechoic chambers to calibrate mics and speakers kept for references, I prefer to use a combination of other methods which are more useful in the real world.  When developing a driver, I prefer to use gated response on high frequency drivers and ground-plane on low frequency design. I adopted this technique many years ago from Don Keele.  For on-axis response at listener position, I average 2.5m, 3m, & 4m responses which weighs in on the all-important floor bounce.

AH: How do you measure loudspeaker distortion?

Bill: In my lab we have LoudSoft, Clio, LMS,  several Audio Control SA-3051 spectrum analyzers, AudioTools and REW.  All mics are calibrated against a single Earthworks for consistency.

We key primarily on THD and impulse measurements initially when voicing new drivers, but we put strong emphasis on designing for low intermodulation distortion when creating speaker systems. Some of our manufacturers supply Klippel data at our request which provides extension data on non-linearities within the motor design. We have a simple philosophy in-house:  if you can see the diaphragm move at natural playback levels, the driver is becoming overworked (crossed too low or too shallow) as the visual cortex [your eye] only holds on to an image 1/15 of a second. A subwoofer with a low steep filter is the acceptable exception to the rule.

I am not a huge fan of two-way designs because of the large low frequency displacement requirements on the midrange/bass driver.  I will typically port the design, and augment the alignment with a second-order high pass bass filter, just to reduce needless cone excursion requirements below the audible contribution bandwidth.

Another source of electronic I.M. is choke hysteresis, as ferrites can saturate early.  We are very careful about our choke cores for this reason. A better solution is to eliminate the inductors and move up to DSP crossovers. AH: What measurements provide a true picture of performance and how a speaker will sound in a real room?

Bill: We measure the pressure response and also the power response as the first order reflections emanate from our side walls. A compact two-way design will sound essentially as you place it. (For example, when placed on the floor it can sound boomy, when placed in the middle of the room it can sound lean) Thus the advantage of our larger, multi-way speakers that come with DSP. The DSP allows you to take advantage of boundary reinforcement while addressing peaks in the response.

What really sets Legacy apart are these principles:

1. We accept that distortion is proportional to displacement. For that reason our designs tend to have ample piston area. A loudspeaker’s voice is greatly influenced by its polar pattern. We have two ears mounted to the sides of our head and the brain processes the sum & difference information carefully. This puts equal emphasis on the room’s power response as well the on-axis pressure response.

The radiation pattern of a loudspeaker dramatically influences the sonic signature of a loudspeaker. Directivity & piston area increase progressively as we move up the LEGACY line of speakers.

AH: We notice that your speakers have a lot of drivers for the bass and mid frequencies. What's the idea there?

Bill: The wavelength at 10kHz is a bit more than an inch.  A decade lower at 1kHz it’s about a foot.  And at 100Hz it is over ten feet.  For every octave we drop, cone excursion requirements increase by a factor of four.  Therefore to maintain reasonably uniform directivity and low distortion, the radiating area must increase with the wavelength. AH: What type of testing and quality control do you perform on your products?

Bill: We measure pressure response, impulse/polarity, and impedance. We hand-tune the crossovers of every pair to a reference curve.  The final musical test lasts three minutes as played at high levels.

AH: What product was your greatest achievement as a loudspeaker engineer and why?

Combine top quality parts, excellent craftsmanship and engineering and you're left with... a Legacy product.  We are looking forward to reviewing their products in our own sound rooms. Legacy will be building us a pair of Focus SE with the air motion tweeters to check out.  Stay tuned...