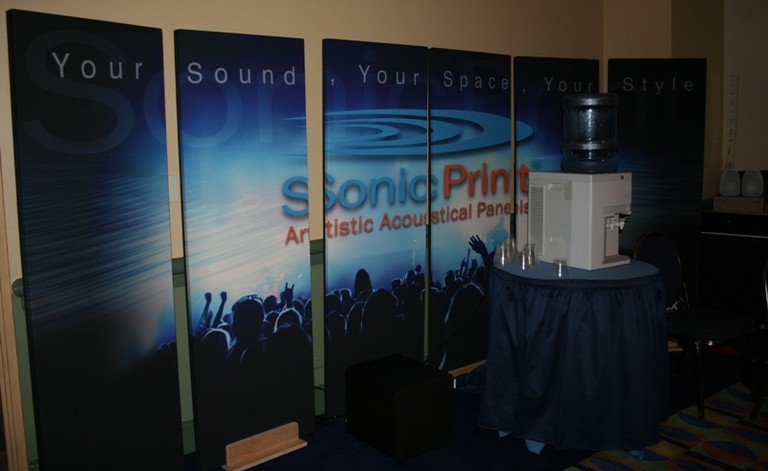 Auralex Acoustics showed off their SonicPrint panels at the Audioholics State of the CE Union event. They treated the Pioneer/Dolby and EMP/Yamaha rooms with upwards of 20 panels each, giving those rooms an advantage over the untreated ones. We've seen the SonicPrint panels at the most recent CEDIA tradeshow, but here we had an opportunity to really examine them up close and personal.

For those not familiar with room treatments, the general idea is that you are trying to absorb the sound waves reflecting around the room. When done properly, this will tighten up the soundstage and will generally make your whole system sound better. When sound is reflected, it arrives at your ear slightly later than the direct sound. Some of this is needed as too much absorption makes a room sound unnatural and "dead." We are used to hearing some reflected sound. The problem occurs when you have too many reflections. In a normal home theater you might have first order reflections (bounced off one wall), second order (off two), or more. In an extreme example, if your rear speakers reflect their sound off the front wall, it can actually sound like the rears are playing from the front of the room! This might be OK for the uneducated that think that the more cube speakers up front the better, but it is completely unacceptable for an Audioholic.

The problem has always been that it is hard to bring room treatments into a living environment and have them blend. Few of us can brag that we have a dedicated home theater and even those that do, the compromises made with our significant other on aesthetics usually favor bigger speakers over room treatments. While HGTV shows often feature "accent" paint which could easily translate into a square or rectangular absorption panel, too often just the thought of a fiberglass panel on the wall was enough to send someone to sleep on the couch.

The Auralex SonicPrint panels take a lot of the air out of the "I don't want ugly panels on my wall" argument. Essentially, you can print whatever picture you like on your panel! I've seen these panels before but it has always been on the floor of a tradeshow under harsh florescent lights. At the SOTU event, I was able to see what they would look like in a real room. In a word - amazing. On the show floor with your nose up to them you can see the texture of the panel fabric. Sure, it sort of gives the impression of a brush stroke, but not really. Once we got them in a room, even with the lights on, they looked like prints. They had sharp lines and crisp images with stunning resolution. Most of the time I was sitting half way across the room from panels that were eight feet high by two feet wide. This is how they would be placed in a real room though most likely not as large. The panels were about 2" thick and provided a significant reduction in reflections. Consequently, the EMP and Pioneer rooms sounded much better than some of the other demo rooms.

From conversations with Sean from Auralex, no picture is out of bounds. It is all a matter of cost. From the Auralex website you can pick from some of the licensed pictures (which include movies, artistic, music, scenic, sports and more), you can upload your own original picture, or you can request a licensed picture not on the site. In the latter case, the cost of the panel would reflect the cost of the license as well.

The real innovation in the Auralex SonicPrint panels is the technology. While paint or ink would clog the pores of the panel covering, reducing the effectiveness of the panel, Auralex uses a dye. The dye impregnates the material but doesn't affect the performance of the panel. I've seen this technology used to treat not only panels but wall covering fabric so that if you are looking for a specific look for your theater, you can basically create it with fabric rather than being forced to have a custom builder come in. What I found most shocking was the cost. The panels run $179.99 for a 2' x 2' up to a $299.99 for a 2' x 4' panel. This is about $100-$180 premium over the regular panels. Of course, to get that price for the regular panels, you need to buy a minimum of a box of 6 (more likely 12 or 24). Considering the cost of getting a picture printed and framed, this seems pretty reasonable to me. A quick search online uncovered that printing a picture on canvas can run more than the Auralex premium for a smaller sized print.

We know that the Auralex panels work - it's fiberglass. Fiberglass performance is well documented and measured. Now, with SonicPrint, Auralex can take your favorite sports team, family portrait, or artistic accent piece and turn it into a room tuning panel. For more information, please visit www.auralex.com/sonicprint.