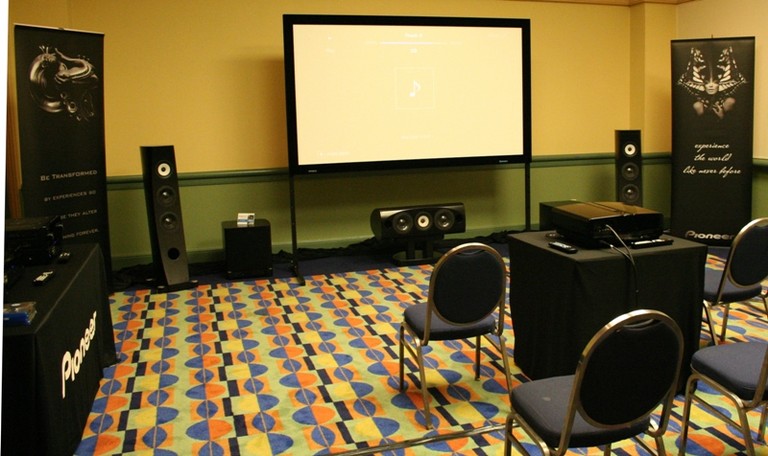 Pioneer teamed up with Dolby and showed off a number of new products at the Audioholics State of the CE Union Event at the Dolphin Hotel in Disney. On display were the EX line of speakers (S-3EX towers, S-7EX center, and two S-W1EX subs in a 7.2 configuration), new Elite BDP-09D and BDP-05FD Blu-ray players, and Pro-141 Signature Series plasma. The $1700 SC-05 AV receiver provided the power while the flagship SC-09TX sat to the side showing off its pretty LCD display. On video duties was the Pro-FPJ1 DiLA projector. The Blu-ray version of Iron Man showed off the theater capabilities of the system and a Dolby Blu-ray Demo Disc showed off the audio capabilities.

One of the many features Pioneer demonstrated with their new components was PQLS. PQLS provides jitter elimination. Generally, Blu-ray players use the video clock which is not as accurate as the one included in the top end Pioneer receivers. When a Pioneer Blu-ray player and receiver are mated, the receiver will actually send the clock data over to the Blu-ray player. The Blu-ray player will then use that more accurate clock rather than the video clock. According to Pioneer, this eliminates jitter. The only problem with the demo was that it took a good 30-60 seconds to switch the PQLS on or off so it was really hard to note a difference. In the future they plan on making A/Bing easier for demos.

The BDP-09D Profile 2.0 Blu-ray player has two HDMI outputs that can be configured to video or audio only or both. Also, it is designed to not only provide Blu-ray duties but to replace your high end CD players. Of course it has 7.1 outputs but what is unique is that they have discrete analogue Wolfson DACs on each channel (the 05FD has four Wolfson DACs). To my knowledge, they are the only company that is doing this. The only real hit this player takes is the lack of DVD-A and SACD support. With TrueHD and other HD audio codecs, perhaps this isn't such a big deal anymore. Soon to be a standard feature on the higher end Pioneer products is Kuro Link. Since Pioneer knows its own products, Kuro Link allows you to do specific calibrations and adjustments specific to the Blu-ray/display combination. With the PQLS system and the attention to analogue detail, suddenly the $2200 price tag on the Pioneer Blu-ray player is starting to make a little more sense.

What was interesting was that I was there listening before Auralex came to install the room treatments so I had a nice example of the difference between the treated and untreated rooms. As you'd expect, the overall sound and presentation was tighter and better defined. Also, to my ears, the highs were much tamed. The overall presentation was, in a word, stunning. The sound quality was excellent, the stereo separation was very good, and picture looked great. On top of that, the SC-05 AV receiver was pushing 6 floorstanding speakers to ear bleed levels and it isn't even Pioneer's flagship! Like the SC-09TX, the SC-05AV sports onboard ICE amps which keeps the size down without sacrificing power. With the Dolby True HD music demos, sounded like I was in the studio with the artist. With only two small subs, the room literally rumbled. It was no only tactile but I could feel the air off the drivers blow up my pant leg. At first I thought the subs were front ported (explain the breeze) but they weren't. Also, I was feeling this wind at 10+ feet! The power was amazing.

One thing that is great about setting up dedicated rooms in conference rooms rather than a show floor or hotel rooms is that the rooms are larger (better for bass management and seating), the external noise level is lower, and you can control many more variables. While all the rooms benefited, the Pioneer/Dolby room with the Auralex treatments really made the best out of it. What you end up with is a listening experience that rivals nearly every movie theater I've ever been in and most dedicated home theaters. While I often have to

While we'll have an article soon talking about the specifics of the Pro-141 Signature Series plasma, let me say that the picture was remarkable. At 60 inches, the Pro-141 is ~2 inch thick, $6000 plasma monitor (no speakers or tuners) that I could quite literally put my nose on and experience better picture quality than I did sitting across the room from some of the displays I've reviewed recently. The Pro-141 is calibrated at the factory. It comes with the engineer's name on it so you know exactly who calibrated. The monitor is networkable and will tell Pioneer when it starts to break down. Pioneer will call you and set up a service appointment. You can control the display over the Internet. You can check the status online. Installers can change the calibration online. Also, you can control all the displays on a single network at the same time so if you want to bump up the brightness of all of them, you can do it with a single command. While it is easy to look at the price tag of the Pioneer gear and jump to conclusions, when you actually see it in person, you quickly understand why their products cost that much.

Read the Complete Thread
engtaz posts on October 26, 2008 13:22
They have a very nice setup and were very informative.

Drag0nFly, post: 473128
Yes, Oppo has got it right, although little info has been posted on its availability and pricing. I kind of doubt the analog section is going to come even close to the Pio, though; which is a rather crucial aspect when playing high-res audio formats such as SACD & DVD-Audio (& DTS HD MA, for that matter–unless you're bitstreaming it to your brand-new receiver)

But then again, if the response-times on the Oppo are decent compared to other brands it might serve as a stop-gap measure until a proper high-end player is released…

HDMI 1.3a all the way! With Audyssey, I will not go back to analog.
Drag0nFly posts on October 25, 2008 09:50
Yes, Oppo has got it right, although little info has been posted on its availability and pricing. I kind of doubt the analog section is going to come even close to the Pio, though; which is a rather crucial aspect when playing high-res audio formats such as SACD & DVD-Audio (& DTS HD MA, for that matter–unless you're bitstreaming it to your brand-new receiver)

But then again, if the response-times on the Oppo are decent compared to other brands it might serve as a stop-gap measure until a proper high-end player is released…
ned posts on October 25, 2008 07:23
OPPO…Oppo….oppo….opp…..
Post Reply