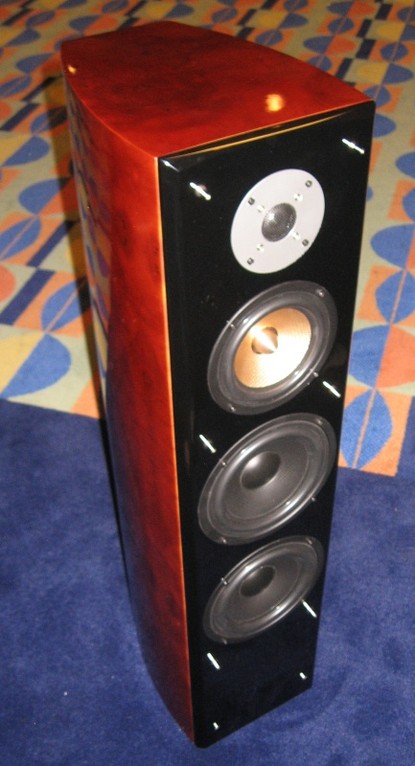 EMP, a company sharing the design gurus behind RBH sound attended the 2008 SOTU party and brought several prototype speakers with them to the show.  What caught my eye most was the yet unnamed speaker in the Impression line.  It was a little shorter than the average tower speaker, but its looks were unrivaled by virtually any speaker at there.  Sporting a 3-way crossover with 4 drivers, it was impressive to behold.  However, there was only a single speaker to show, so it wasn’t available to listen to.  I believe EMP was looking for feedback on the configuration before proceeding to the next production level.

In addition, there were several speakers in the unreleased EF70 line ready for listening.  The show room was configured with two EF70T speakers in the front, an EF70C speaker in a vertical configuration for the center, as well as the EF70 bookshelf speakers for the rear and front presence channels.  At first glance, the very slim 2-way towers seemed suspicious to me with a single tweeter and six 5.25” drivers, but as soon as the system was up and running with Transformers on Blu-ray, my fears were relieved.  I was very impressed with the clarity and audio performance as well as the looks of the piano black finish and two wood finish options.  My audio nirvana would have been truly complete if they had brought 7 of the tower speakers.   At the show the price was yet to be determined, but to give a point of reference, it may be around $2000 a pair for the towers with appropriate prices to match for the center and bookshelf size speakers.

Of course, the system wouldn’t be complete without a subwoofer or two, but four E10S subs were part of this fantastic setup.  The bass response in the room was excellent and deep, despite the fact that these are only 10” subs.  EMP did mention that they are working on a 12” version, the E12S which should be ready soon.  Make sure you keep your eye on this speaker manufacturer as they have excellent quality products and some fantastic upcoming items.  Here are some preliminary specs for the EF series:

We're really looking forward to doing a review of these speakers - which we feel may be the most beautiful  to come out of either RBH Sound or EMP since we've known the companies. If they sound even half as good as they look in our listening environment, then they should sell out of stock shortly after they arrive to the market!

rnatalli, post: 473172
Now those are some nice looking speakers.

The EF-70T tower with the grill


The prototype of the Impression series speaker