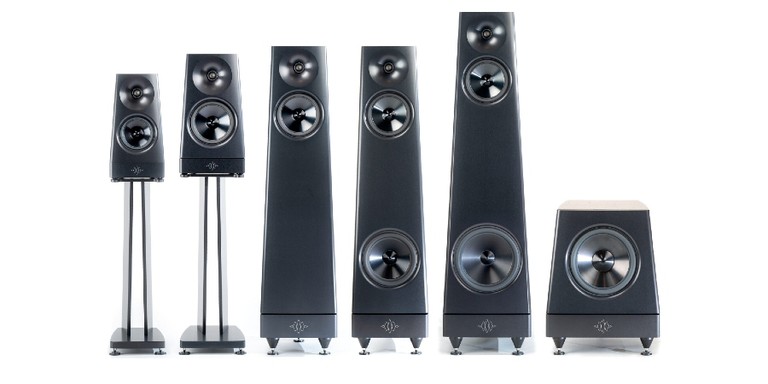 An audio show is a notoriously difficult environment in which to judge a piece of gear. Don’t get me wrong; I love going to shows — they’re like audio Disneyland for me, and I’m bummed that I wasn’t able to attend Axpona 2022. But a show is hardly the ideal place for forming opinions about playback hardware. You’re in some random hotel room with crappy acoustics, and you’re listening to a whole system of unfamiliar components. You might be given the opportunity to play one or two favorite tracks, if you’re lucky. Often, the exhibitor picks the playlist. Early in my audio life, I attended a show where Dynaudio speakers were featured in two different rooms. Both systems sounded harsh in the high frequencies, so I assumed that Dynaudio speakers had brittle, edgy-sounding tweeters. If you have any familiarity with Dynaudio speakers, you’ll know that nothing could be farther from the truth, but I jumped to a completely false conclusion based on limited data. Now I know better, but I still believe that attending audio shows can help you reach a reliable conclusion under certain circumstances. For example, I’ve mentioned at least a few times that I’m a big fan of the high-end electronics from California’s MSB Technology, whose pricey digital-to-analog converters are among the best in the world. I knew these DACs were something special before I ever heard them in a store, and to this day, I’ve never had the chance to hear one in my own home. I got to know MSB’s products at audio shows. That’s shows, plural. Repetition is the key here. I have visited the MSB room at a dozen or more different audio shows over the course of about 14 years, and the sound has always been spectacular. The room sizes and layouts changed from show to show, and various MSB products were rotated through the exhibition system, but a few things stayed consistent. I was always allowed to play my own music, and the sound was always superb. It became clear to me that the folks at MSB know how to design great electronics (and that someone on the MSB team is extremely skilled at system setup — those hotel rooms can be challenging!) One other constant in this traveling audio circus was the loudspeakers. In almost every MSB system I have heard, the speakers were from YG Acoustics. Like MSB’s electronics, YG’s speakers have consistently delivered the sonic goods whenever I have had the pleasure to hear them in action. But even if my fairy godmother dropped a whole rack of MSB gear on my doorstep, I’d never be able to afford the big YG Sonja floorstanders that I’ve enjoyed so many times at audio shows. The Sonja 2.2i sells for over $88,000/pair, with larger configurations pushing well into six figures. The compact Carmel 2 has been the brand’s least expensive offering, at $24,300/pair, since it was introduced a few years back. But now, as the brand celebrates its 20th anniversary, YG Acoustics has released a whole range of less expensive speakers called the Peaks Series, with the aim of delivering the company’s high-performance sound to a wider audience. With prices starting at $8,500/pair, the Peaks Series speakers are not inexpensive, but they should give some audiophiles a chance to consider YG as an option for the first time.

The Peaks Series comprises five new speaker models, plus a powered subwoofer. YG says that each model performs “at a new reference level” for its respective price point, and that the lineup will “excel in any size room, across all genres of music.” The Cairn ($8,500/pair) and Tor ($10,500/pair) are 2-way stand-mount speakers. Optional machined-in-house aluminum stands are $1,500/pair. There are three floor-standers: the compact 2-way Talus ($14,200/pair), the similarly small 3-way Ascent ($19,800/pair), and the flagship 3-way Summit ($25,000/pair). The Descent Subwoofer may strike you as expensive at $7,800/each, given its relatively compact dimensions and single 11-inch driver, but that’s pocket-change compared to YG’s only other active sub — the enormous InVincible subwoofer — which costs between $55K and $100K depending on configuration. YG says that “quality was never compromised” throughout the development of the Peaks Series, despite the goal of delivering products with slightly less astronomical pricing. If you’re a fan of YG’s costlier speakers, you’ll be pleased to see that the brand’s proprietary, made-in-house ForgeCore tweeters and BilletCore drivers are used throughout the Peaks lineup.

YG’s unique ForgeCore tweeters employ an ultra-low-distortion motor system in which the tweeter’s magnet system serves as both its motor and enclosure. This arrangement reportedly lowers distortion dramatically. ForgeCore introduces “computer-optimized, highly sophisticated 3-dimensional geometries into the magnet system, using CNC-cutting of the motor parts,” according to YG. In comparison, YG points out that typical tweeters use stamped or laser-cut motors, which, by their nature, are limited to 2-dimensional features. A pioneer in the use of extremely precise CNC machining, YG says that its ForgeCore design results in improvement that is “immediately audible as a sense of ease in the sound,” and that the effect becomes even more noticeable over extended listening sessions, which are more relaxed, while simultaneously remaining engaging.

As the name would suggest, YG’s BilletCore drivers use cones that are machined from solid aircraft-grade aluminum billet. YG would be quick to point out that most drivers are bent, stamped, stretched, or woven — all processes that can result in fatigue in the material. In comparison, BilletCore drivers deliver “unmatched rigidity, accuracy, and reliability, as well as far lower distortion,” according to the company. Each driver starts as a large, solid slab of aircraft-grade aluminum alloy, about 2.5 inches thick, and weighing 16 pounds. After the machining process, the finished cone of a mid-woofer, for example, is just 0.008 inches (0.2 mm) thick, and weighs less than 1 ounce. YG says that the aluminum alloy offers an excellent stiffness-to-weight ratio in the final cone. Some exotic materials might offer better specs on paper, when tested as an unprocessed chunk, but YG states that these benefits are lost when a stamped or woven cone is made, owing to the “micro-cracks where the material is bent or stretched.” YG is happy to back up these claims with measurements taken at the Canadian National Research Council (NRC), which show that “a speaker using BilletCore drivers has far lower distortion than speakers using exotic materials,” according to YG. The company also claims that the lack of weak spots in a BilletCore driver cone also results in superior reliability, compared to ceramic cones, which can crack, and woven cones, which can loosen and lose strength over time. Finally, thanks to the precision and flexibility of the CNC machining process, BilletCore drivers include “unique, computer-optimized ribs (both axial and radial), which give them a phenomenal strength-to-weight ratio.” The biggest downside of the BilletCore design is cost. These drivers are difficult to manufacture, with each cone requiring a large amount of raw material and several hours of machining.

While the ForgeCore tweeters and BilletCore cones might be trickled down from YG’s other offerings, any fan of the brand will notice that the Peaks Series speakers are visibly different from their costlier counterparts when it comes to their cabinets. The front baffles are made from thick chunks of aluminum, which are precision machined in-house to a profile guided by detailed computational modeling. But the rest of the sealed cabinet body is made from one-inch-thick dense resin fiber, which has been “curved to exact tolerances in custom presses by experienced European workshops,” according to YG. This marks a departure for YG, which until now has used admirably silent, multi-layer aluminum cabinets, all made in-house in the company’s Colorado production facility. The use of a less expensive resin fiber cabinet material, along with outsourcing a portion of production, has allowed YG to deliver the Peaks Series at somewhat lower prices. But YG maintains that performance has not been sacrificed in the name of (relative) affordability. The cabinets reportedly include advanced bracing and acoustic absorbers designed to eliminate cabinet resonances and reflections. Plus, the use of a resin fiber cabinet has allowed YG to offer real wood veneer finishes, making the Peaks Series speakers arguably more beautiful than their all-metal stablemates.

The final piece of the Peaks puzzle is the crossover design, which YG says is the result of advanced computer simulations and countless hours of listening tests. The hand-built crossovers are said to use highest-quality components, mounted to circuit boards that YG machines in-house. The company claims that Peaks Series speakers “throw a massive soundstage, providing insight and detail, yet (retaining) exceptional musicality and a natural sound that is never fatiguing. They provide holographic imaging across a very wide area, combined with purity, dynamics, and deep, authoritative bass.”

Here’s a brief rundown of the Peaks Series lineup: The Cairn is the smallest of the bunch. This 2-way bookshelf speaker uses a ForgeCore tweeter and a 6-inch BilletCore mid-woofer. The Cairn is 14.6 inches tall and weighs 28 pounds each.

The Tor is a slightly larger 2-way bookshelf speaker, standing 16.7 inches tall and weighing 40 pounds each. The Tor has a ForgeCore tweeter and a 7-inch BilletCore mid-woofer. The 2-way Talus floor-standing speaker incorporates the same tweeter and 7-inch BilletCore mid-woofer as the Tor, but in a larger cabinet that stands 40 inches tall and weighs 95 pounds each. The 3-way Ascent floor-standing speaker combines the ForgeCore tweeter with a 7-inch BilletCore midrange driver and an 8.5-inch BilletCore woofer. Like the Talus, it stands 40 inches tall, but weighs a heftier 120 pounds each. Note that you’ll need an amp that’s comfortable with low-impedance loads, such as the Parasound Halo JC 5, for example. The flagship 3-way Summit speaker employs a ForgeCore tweeter along with a 7-inch BilletCore midrange driver and a 10.25-inch BilletCore woofer. Its larger cabinet is still relatively room-friendly, standing 44.7 inches tall and weighing 159 pounds each. YG says that the Peaks Series represents a no-compromise approach to building speakers that maintain the company’s exacting performance standards, but at prices that will hopefully allow more people to see and hear what YG Acoustics is all about. According to YG, “everything from the drivers, cabinets, and crossovers, through to the veneer, lacquer, and internal cabling has been carefully selected and modeled to deliver the most accurate, most musical performance possible.” Personally, I hope to hear these new speakers paired with MSB electronics as soon as possible. If I didn’t need a new car (and about 50 other urgent things), these speakers would be at the top of my wish list. I hope my fairy godmother is paying attention.