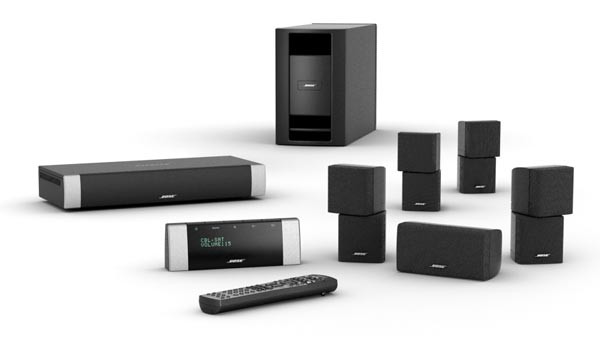 Click on that "Buy Now" button, I dare ya!

Note: Bose seems to make it nearly impossible to find any real electronic specifications on their systems. Supposedly this is to keep their secret research safe, but it seems to us they are hiding the truth and that their electronics likely have very poor specs.

Now, I know what you are thinking, "Your first impression is 'Gotta Have It'?  What kind of Audioholic is that guy, anyway?"  Well, to be honest, that IS the first impression most people have when they hear the name "Bose."  Of course, the commercials on the Discovery HD channel after nearly every show tell the average Joe how small they are and how great the room-filling sound is.  When Joe walks into the local big box store, the Bose demo is setup nicely and always works.  Joe gets to hear a pretty cool surround sound demo and might actually feel like he is there at the event or concert.  Then the price tag shows the Lifestyle V20 is just about 2 Grand, so it must be good if it costs that much!  So, Bose has really created that "Gotta Have it" impression in Joe's mind.  What Joe doesn't know, won't hurt him, right?  Or will it?  Anyway, on to the system...

The V20 system includes four dual-cube speakers, the sub module, a display component, an audio/video input switcher box, and the remote control.  The very small speakers come in black and white and the other components are also fairly small.  The system is a little more complex to set up than the average Home Theater in a Box (HTiB) since the display has been separated from the audio/video input module.  On a typical system, the display, inputs and outputs, and sometimes DVD player, are all built into one small component, but not here.  There are also HDMI inputs and outputs as well as the standard composite, component, S-video, optical TOSlink digital audio, and analog stereo audio connentions.  The Bose system is very expensive at nearly $2,000 and the sound quality isn't really any better than many other surround systems costing a third of the price.  The cube speakers seem to roll off on the higher frequencies and leave the treble lacking.  The sub module has two 5.25" cones that produce a decent mid-bass thump, but can't really fill in where the small cube speakers left off.  Let's quickly calculate the surface area of the subs to see how they compare to other single sub systems.  We'll use Pi times the radius squared to get the surface area of a cone, double that, then perform the calculation in reverse to come up with a cone diameter.

Once again, the V20 system is lacking as many $600 to $800 systems include 8 to 10 inch subwoofers.  Of course, a larger subwoofer cone doesn't necessarily mean better quality, but in this case, the smaller cones simply cannot reproduce lower tactile frequencies and you will be left wanting more low bass.  One the plus side, the remote control has a nice layout, the display component is clear and has a good look.  The input/output switcher has multiple connections and can be placed in hidden location near the sub module and display.  There is actually an auto calibration function as well, but it's really hard for an electronic correction or EQ to make up for the low quality speakers.  The manual is vague and the diagrams will be confusing for first time users, as well.  All in all, the system does sound better than other Bose systems we have heard, but that very high price is a concern.

Let's jump back to the average Joe for a second.  He has seen the marketing, heard the carefully contrived demo, and knows of the price.  Sometimes a helpful face at the local store will point out better alternatives to help Joe make a decision that's more economical.  If you are the Joe with $2,000 to spend on a home theater, there are much better options to be had for the same cost.  If you are the Joe that wishes you had that kind of money to blow, rest easy knowing that a $600 system will get you similar sound, though it may not look as dimunitive and sleek.  If you are dead set on spending the money on a Bose system because you are certain it will impress your friends and the sound is good enough for you, well, the local big box store won't mind taking your money... and really, the V20 isn't a terrible sounding system, and does sound better than its predecessors thanks to a little auto-calibration.

Disclaimer:  If your name is Joe and I offended you by calling you "average", please accept my apologies.  If your name isn't Joe, but you are the average consumer with a Bose system then please accept my apologies for ruining your perception of the quality of your system.  If you don't even know someone named Joe and/or you don't really care about HTiB systems or Bose, then why are you reading this article?  No apology for you!

In some ways that's always been my perception of them, but they do seem to occasionally make something which is decent, I think. (not sure)
jostenmeat posts on September 20, 2008 16:02
cbraver, good point. OTOH, I think I buy my my more expensive stuff as non A-stock/used, as I do with AV. Example: most of my furniture is bought from a local consignment center. I got a beautiful couch and dining table. Nice recliner, bench, and so forth, as well.

Honest question: Is Bang & Olufsen like Bose on steroids? curious.
cbraver posts on September 20, 2008 15:53
It's a different customer. They are looking for the style and the name in their living room. If these customers were really interested in high fidelity, they would have done more research than just walking in and purchasing it. I'm honestly not really worried about it.

We probably overpay for our clothing, which could be more stylish for less. We probably overpay for our glassware, our furniture, and so on. If we were interested in those things more, we'd probably spend the time to spend less and get more…. but we aren't… we just want something to suffice and give us a perception of quality and usability. The cost of searching out the best deal or best product in a price range for the things we aren't that interested in just doesn't pay off or isn't reasonable.

Jim Robbins was right on the money,…anywhere I go and people hear Bose,…and..gotta have it…they don't care about specs,..sound or the weird setup…and how else can you talk about Bose,…its a joke…you can't talk serious about this gimmick….by of course Dr Bose…you could get an Onkyo 800 or 5100 for about 400.00 dollars…ten times better than any Bose….leaves alot of money to add a second subwoofer and get some real bass and still have alot of money leftover….but for Bose lovers…..and the Neanderthals cooked their Bose,..and were amazed at the snap and crackle of the fake wood…and then they discovered expensive firewood….tune in next on the Discovery Channel when they discover real speakers…and they still buy Bose,…so to this day they remain Neanderthals…and evolution for them is hopeless….
Post Reply