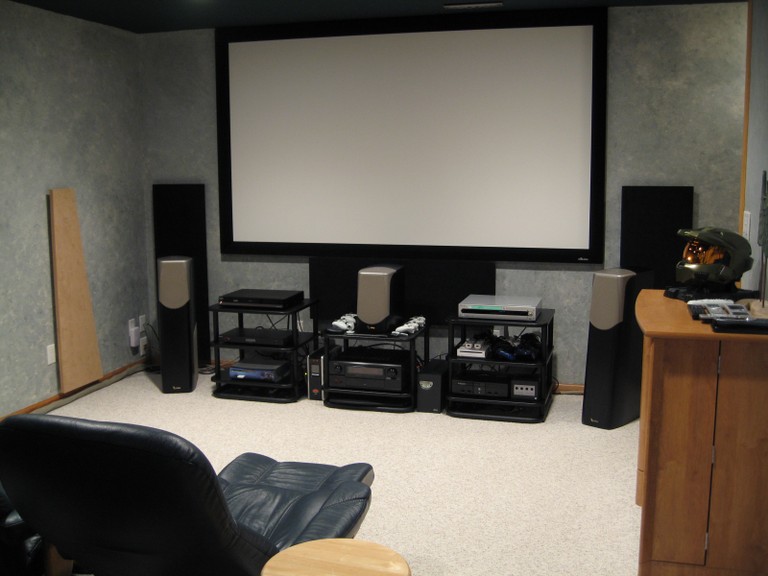 Starting many years ago with a meager HTIB, TV and VCR, this system has worked its way into a full home theater with 106” projection screen, full 7.1 audio setup, and high definition sources. You can read about his progression in “Am I an Audoholic?” The primary motivation behind upgrades for Reference System 6 has been primarily been a better video gaming experience, but movie watching was a close second. This theater is the primary screen for movies and daily TV viewing. Of course, music is a part of the Robbins’ household, so there is also a separate 2-channel system in the main living room. Most of the serious and casual music listening is done there while the multi-channel experience is left for the man cave.

Even though he just added some Auralex Sonosuede acoustical treatments to the theater room, there are some planned upgrades for the future. These include a PS3, a newer HD DVD player, upgraded receiver, and possibly one of the new 1080p LCD projectors based on the newest D7 panels.

As you can see from the parts list, images, and future wants, Jim is a gamer. His children are likely doomed to repeat his time-wasting habits. Of course, they’ll be so spoiled by the time they leave home, they might not have the heart to play games on a mere 26” or 32” screen with no surround sound. There is hope for them yet!

Alas, poor Jim is an audioholic for life… (and yes, by poor we mean Jim spent all his money on gear and doesn’t have much left!)