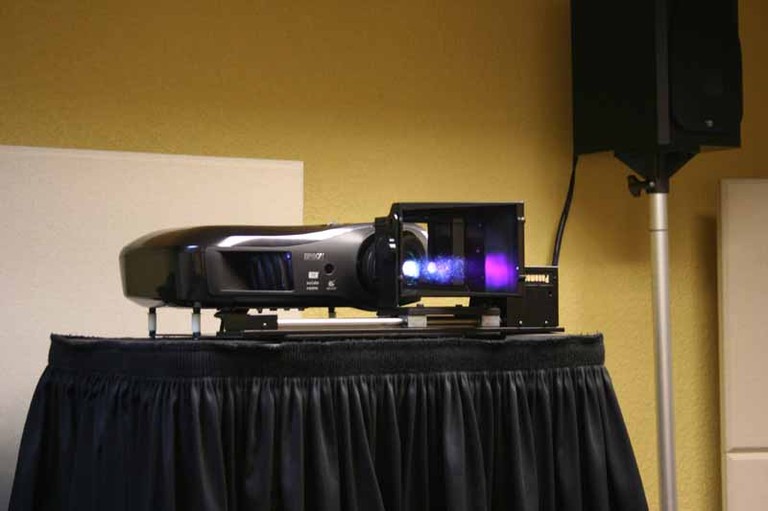 We got an up close and personal look at the new Epson PowerLite Pro Cinema 1080 UB projector at the 2007 Audioholics State of the CE Union event in Clearwater Beach, Florida. The "UB" stands for Ultra Black and by the looks of what we saw on the screen, the designation is not given lightly. While DLP insists on providing a color wheel and holding out its 3-chip designs for only the most high-end models, Epson and other 3LCD manufacturers are cleaning house in terms of bang for the buck. This under-$5000 projector features a healthy amount of lens shift (almost 100% vertical and 50% horizontal), two HDMI 1.3 inputs, Deep Color (x.v.Color) support, and a 2.1x zoom.

With a name like PowerLite Pro Cinema 1080 UB, I think Epson needs to drop some of its nomenclature or risk spraining some tongues, but all kidding aside the projector is fantastic. It's stated 50,000:1 contrast ratio may be a bit overstated in terms of real-world numbers, but you can bet that with their new D7 panels with C2Fine (a new inorganic substrate that uses 12-bit video processing and a new polarizing light filter) and 1600 lumens, the 1080 UB is no slouch.

The new UB model continues to have the same ISF certification of the Pro Cinema 1080 and sports the same low-noise 24dB fan system (in Eco mode) that makes this such a beautiful projector for home theater installations. The retail of the Pro Cinema 1080 UB is going to fall under $5000 and it should release in December. The Pro model also comes with a 3-year limited warranty (as opposed to 2-years) and also includes a ceiling mount and spare lamp.

In the demo we witnessed at the State of the CE Union event, Epson paired the projector with its optional motorized anamorphic lens system and outboard Silicon Optix HQV video processor. This would, supposedly, make this the "Epson PowerLite Pro Cinema 1080 UB HQV" but my tongue is already numb... With the anamorphic lens and scaler system (roughly an ~$8000 added cost), the picture was absolutely stunning. We saw clips from King Kong and Seabiscuit. Seabiscuit was absolutely stunning in terms of its color. Reds (as in the jockey uniform worn by Toby Maguire) absolutely jumped off the screen while holding on to their definition and detail. Skin tone was realistic and greens were actually green, not green-yellow as is often the case. King Kong demoed the incredible detail and black level reproduction that is possible with this projector (we saw the stampede scene and the rocks and cavern walls made for perfect video demo material). There was absolutely no ambient light in the room, save that reflected by the screen - but it was still apparent that the 1080 UB has massive potential and has overcome some serious hurdles in producing darker blacks.

The scaler allows the D7 chip to "fill" completely up with an anamorphic image from a 2.35:1 source found on a DVD or HD-DVD. This means that there are no pixels taken up by black bars and "wasted" on the LCD panels. The picture, as a result, is about 30% brighter and the anamorphic lens then expands the output of the lens to the proper 2.35:1 aspect ratio. At the demo we saw the output on a 2.35:1 Carada Criterion screen. There were no black bars and every pixel was being used to its utmost potential. This projection system makes a very nice picture. It was especially nice since Kevin Miller from ISFTV had been on hand earlier to personally calibrate the image to the screen and tweak out the projector to its fullest potential.

Keep your eyes peeled for this product towards the end of the year and start saving your pennies now. If you're a consumer, you'll want to check out the Home Cinema 1080 UB, but serious custom installers will undoubtedly want the ISF features of this model for their clients.

Thanks for the first look on the UB. I sounds incredibly interesting. Could you comment on the brightness fo the projector?

I have a situation where I am going to be using a family room as theater room and during the day I can perform moderate light control but at night will have not problems getting the room dark. I am wanted to be able to enjoy HD football on Saturday's and Sunday's so being able to calibrate to D65 and still have a strong picture is import as well.

If you can also recommend a screen combination that offers a good vieing cone for this situation with decent gain and good contrast ratio it would be appreciated as well.

3 chip DLP blows out in comparison to the other technology, IMHO. I prefer a 3 chip 720p DLP over any other 1080p non-DLP system such as the Infocus 777 or the Sim2.
Clint DeBoer posts on October 17, 2007 22:06
I am sensitive (very) to rainbows… so while DLP front projection tends to have slightly better black levels (if you have the kind of room that allows you to see it) LCD technology, with its 3-chip panels and lack of color wheel makes for a much better picture.

DLP has positioned itself to protect the overpriced “high-end” 3-chip systems from becoming affordable (as of now anyway) they are (I imagine) afraid that once they allow those prices to drop, then there will be no real difference between the high-end cinema projectors and home projectors, save lumen output.

Clint,
I'm not familiar with 3LCD projectors but the image subjectively compares similarly to a DLP projector.

Jim Robbins, post: 320813
This was a very cool demo at the party. However, in between scenes, I did notice that there were some funny color blotches on the screen. I think this was from dust that was on the anamorphic lens. Does any one know if this kind of anamorphic lens system will be included internally to any projectors of decent price in the near future? It sure was cool to have the whole screen in use and have the full resolution of the chip as part of that…

Are you referring to a native 2.35 projectors? You wouldn't need any ‘internal lense’ for that. Runco has announced a 720p 2.35 native projector at an surprisingly affordable price.
Post Reply