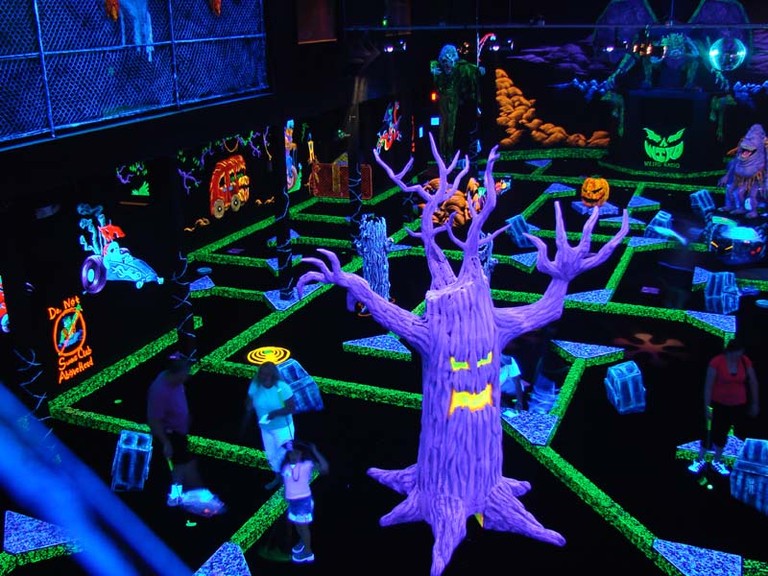 While we were all being led to believe that Monster Cable is NOT about suing small unrelated companies sharing the “Monster” name (in a recent response letter from Noel Lee), they were busy firing up litigation against a Mini Golf franchise called Monster Mini Golf. Giant Monster Cable has already burdened Monster Mini Golf with nearly $100k in legal fees and it looks like there is no end in sight. This personally touches home to me as one of their mini golf facilities happens to be in my neck of the woods in New Port Richey, Florida. I can’t fathom the idea that a cable company would contend that a mini-golf operator is infringing its trademarks on a line of audio and video cables, and would go so far as to bring this kind of frankly silly litigation as a result.

Christina Vitagliano, Founder of Monster Mini Golf, was kind enough to share the details of her Monster Cable fiasco with me and granted us permission to post this on the Audioholics website. Ms. Vitagliano has been grateful for the support of the Audioholics community, and we all wish her the best.

We are about to come to the tail end (maybe) of this ridiculous Monster Cable VS: Monster Mini Golf attack. We are now about $95K into legal fees and are meeting on Wednesday Morning for what the attorney's refer to as Mediation. Yet another insanely expensive attempt to get us to spend more $$ and back down as to what is rightfully ours says Vitagliano.

"Patrick and I are flying in tomorrow (Tuesday) and will arrive in San Francisco at approx 11am for our Mediation meeting on Wednesday (November 5th)."

"This day alone is going to run us approx $10K in fees and travel expenses!! And to top it all off Mr Lee has chosen not to attend!! You would think after all he has tried to do and is still trying to do, he would have the decency to attend."

"This is the request that was sent to his attorney: (and he still declined)"

Monster Mini Golf's ultimate decision makers, says Vitagliano, at great expense and inconvenience, we will be traveling here from Rhode Island to be present at the upcoming mediation, and so we request that Monster Cable's ultimate decision maker, Noel Lee, attend as well. As you know, Local Rule 16-271 specifies that a corporation satisfies its attendance requirement if represented by a person who has the authority to settle "to the greatest extent possible."

And Check this out!!!

This is what was emailed to us a few days ago. This is what this man thinks he deserves! Keep in mind Patrick and I created this business with our hands and at one point gave up our home to make this work and grow. There are not any words left to describe this man says Vitagliano.

Monster Cable is willing to settle this matter according to the following terms which they believe are reasonable for us:

1. Monster Cable would grant a license to Monster Mini Golf LLC (and Monster Entertainment LLC if appropriate) to use the mark MONSTER MINI GOLF for the uses set forth in the trademark applications, including the right to sublicense its franchisees. Your clients would immediately discontinue usage of any other "Monster" mark and not resume other uses. The license would be to use the mark in stylized form in the manner of the registration application.

2. Monster Mini Golf/Monster Entertainment would pay a paid-up, one time royalty for the use of the "Monster" mark of 5% of their gross revenues to date, which you have represented to be $1,600,000. I.e., the paid up license for your clients and all current franchisees would be $80,000. There would be no requirement to include the revenues of your Sacramento franchisee or other franchisees into this calculation.

3. However, as usage of the "Monster" mark grows there would be an additional royalty component. For each new franchisee beyond those currently existing, Monster Mini Golf/Monster Entertainment would pay a one-time $3,000 royalty, within 60 days of execution of the franchise agreement. Thus, if your client adds 4 new franchisees over the next 2 years, it would pay $12,000 over the next two years.

4. All parties, including all franchisees of defendants, would be included in the mutual release. There would be the usual and ordinary reporting requirements and warranties in the agreement.

We believe this arrangement is fair. We believe a large part of the success of the company has come from usage of the Monster trademark. The figures we have cited above should represent a reasonable portion of the profits earned by the corporate entities derived from use of that mark. We obviously declined, said Vitagliano. This really is the true meaning of Corporate Bully!! I'd greatly appreciate it if you could post this information on your website to help get the word out. I know it is not your area but the one thing that we have heard is that if he (Noel Lee) gets enough Bad Publicity, he actually backs down. Although, I am not sure I believe that.

Monster Cable asserts a universal monopoly on the word "Monster" in relation to any product or service regardless of its nature and is described as a "Trademark Bully" in multiple intellectual property publications.

I recall Noel Lee’s recent quotes from his response letter originally posted on Audioholics where he objected to this characterization, and in April 2008 issued (through Counsel) a press release in which he said that Monster Cable had no pending trademark infringement suits (an UNTRUE statement when made, and then again when Monster Cable sued "Monster Mini Golf" in May of 2008), that he recognizes that he (or Monster Cable) does "NOT own the word Monster", and that we would NEVER try to harm a company whose focus was on "Products for Children".

Yet that is exactly what Monster Mini Golf and the family business it franchises are. Basically they are attempting to bankrupt my company both with legal fees and royalty fees for their alleged Trademark rights which they think should extend beyond their business model despite they don’t publicly state so.

So..this is what we are about to deal with on Wednesday morning (November 4th) in San Francisco.

Any help would be greatly appreciated! We respect Christina and Patrick’s conviction to fight this frivolous lawsuit and wish them the best of luck. As a fellow Audioholic, I felt it my civic duty to report another almost countless example of corporate bully tactics against yet another family owned company that until they got served, didn’t even know anything about the Monster Cable name let alone their Trademark litigation tactics. In this day and age, with such a fragile economy, it saddens us to see a corporate giant like Monster Cable drain the resources of small businesses in their efforts to line their pocketbooks and claim broad trademark rights to a word in Webster's Dictionary called “Monster”.  In the words of the ever so brilliant Bono, I say to them "don't let the bastards grind you down!".

highfigh, post: 571629
The fact that the word has been one of the most widely used words in the language, as well as its equivalents in the other languages of the world, makes the chance of your trademark attempt one of the most ambitious and frivolous I have seen, seem slim. $5 is an outrageous fee for a word that could easily be substituted by one from any of the Worlds' known languages which, BTW, I have submitted a trademark application for each and every one so don't get any big ideas that you can use ‘El’, der', ‘la’ or anything like that.

Per your request, I am sending you a copy of a response to a payment request that I think is appropriate, instead of the $45 you probably think I owe for the last paragraph.

Halon451, post: 500295
Unbelievable - Noel Lee appears completely unapologetic in his little slice of air-time on that broadcast. What a complete a$$!

In other news - and this affects you all: I've decided to trademark the common English word “the”, so everyone on this forum who has used this word in all of your posts, I am only asking for a modest royalty of $5 per person, per usage of the word. PM me with payment details.

The fact that the word has been one of the most widely used words in the language, as well as its equivalents in the other languages of the world, makes the chance of your trademark attempt one of the most ambitious and frivolous I have seen, seem slim. $5 is an outrageous fee for a word that could easily be substituted by one from any of the Worlds' known languages which, BTW, I have submitted a trademark application for each and every one so don't get any big ideas that you can use ‘El’, der', ‘la’ or anything like that.

Per your request, I am sending you a copy of a response to a payment request that I think is appropriate, instead of the $45 you probably think I owe for the last paragraph.

Alex2507, post: 496250
I didn't know he was Asian. Now that I think about it I have never thought badly of an Asian person. I think Asian people should take it upon themselves to perform an honor killing on this cornhole:

Pol Pot, Mao, Kim Il-sung, his son Kim Jong-Il and the others we usually don't hear about in the US (because some of the Asian countries have strict control over what info is released about their leaders) leave you all warm and fuzzy?
Post Reply