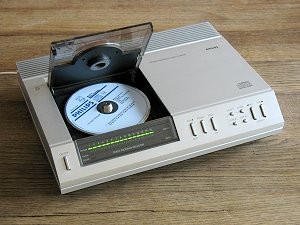 With so much in doubt about the future of the CD it's easy to overlook that on Friday the Compact Disc format will turn 25. In Germany the world's first CD was pressed, belonged to Polygram – the recording company not-so-coincidentally owned by Philips. The first CD to be manufactured at the plant was "The Visitors" by ABBA. Yeah, baby. CDs were introduced on the market in November 1982 with a healthy catalogue of around 150 titles - most of which feel under the category of classical music.

The first CDs and CD players (like the Philips CD100) were introduced in November - at least in Japan. US and European markets received the players slightly later during March of 1983. It took until the 1990s before the format really took over and eclipsed LPs and the wildly popular cassettes that dominated the market. It took about that long for the record industry to truly embrace the format and acknowledge that it was the logical choice for the future.

Currently, the CD seems in a state of necessary decline. Record labels have experimented with adding extras and lowering the wholesale price of CDs, but few have truly dropped prices enough or bothered to grasp the future with two hands. Several opportunities for change have arisen over the years, most notably SACD and DVD-Audio - and now Blu-ray and HD DVD, but industry execs are somewhat reactionary. Instead of guiding the market, they prefer to allow manufacturers lead the way, jumping on the consumer-driven bandwagon once it takes hold (often, in my opinion, years later than if they had provided some sort of leadership.)

One of my favorite stories about the dawn of the Compact Disc centers around one of the few industry moguls to raise his voice against the digital format in its early days. The late Maurice Oberstein, an American who was head of the Polygram UK (later Universal) label, said at an industry event "Do you realise we are giving away our master tapes here?" At the time, everybody was too busy counting the cash to listen. Now, with some of the issues surrounding file sharing and music downloads the industry is realizing that perhaps it shoudl have been paying more attention.

In the end, we hope that the shift away from the Compact Disc results in an awakening of the industry - and awakening to more innovation. This woudl be a nice contrast to the reactionary panic and lawyer-infested lawsuit responses we've seen inflicted on consumers as they reel from the realization that it is no longer 1982 and the world has moved on.

Let's hope for the best and see what the future brings.

Read the Complete Thread
Pheaton posts on August 20, 2007 10:52
Hi,
My first CD player was an Onkyo DX-C310 in the mid 90's. I am still using it in the living room and have never had a problem with it. I actually started buying CD's before I got the player, so that when I did get a player I would have something to listen to.

jeffsg4mac, post: 298075
I remember my first player. It was a little square sony cube thing. I hated the form factor but loved the player. I had at the time about 150 LP's and I sold them all but a select few within 2 months. I wish I could remember what my first CD was. It Might have been Spyra Gyra.

I remember my first CD player too. It was a Sony Discman. I sold all of my LPs and my turntable almost immediately, and have never looked back. I don't foresee a day when anything else will ever be my primary music source.
hemiram posts on August 20, 2007 02:21

Buckeye_Nut, post: 298183
I thought I bought my first CD player late in 83, but according to this link…it wasn't made until '84…LOL Maybe CD player sales are like car sales?

My first player was a Technices SL-P8.
http://www.thevintageknob.org/DAD/SLP8/SLP8.html
Shockingly, I even found a photo of one. (mine was black)

In fact, I was the first person I knew who owned one I still remember the horrid disc selection of the early years, and the average disc price was $16.99-18.99 in 1984 dollars!! I really don't remember what I paid for the player. Just guessing, it was about $400. That was a lot of coin for a HS kid to plunk down!!

My friend got one for xmas from his GF, who dumped him a month and a half later, and took it back. She kept the ring he gave her that was like $600. Her reason for dumping him, “You don't make enough money!”

I bought stuff from Highland Appliance in Toledo back in the 80s. There…. and Sun TV in columbus

Reynolds Road, or Monroe St?
The Dukester posts on August 18, 2007 22:56
My first CD player (which I still have) was a Sony CDP-302. My first two CDs (can't remember which I bought first…I'm old and forgetfull) were B. Joel's “An Innocent Man” and V. Halen's 1984, which is one of the worst recordings I have. Lot's of analog hiss and just plain crappy recording. “An Innocent Man”, by contrast sounds great.

Long live the CD. If we only had more good music and recording engineers
Post Reply