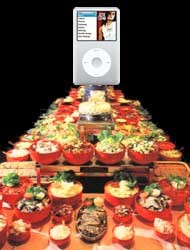 Line up for your vittles!

Apple is currently working (holding discussions) with music companies to offer a veritable smorgasbord of music to buyers of its iPod devices. While the plan is very preliminary in its level of development and subject to any number of changes or adaptations due to industry negotiations, the basic plan is simple. Consumers who purchase an iPod under this plan will be able to download and listen to unlimited songs from Apple's iTunes store. The songs will only be playable on Apple iPod or iPhone products and the songs will, as a result, retain their DRM restrictions.

Now this raises some questions, since the talks are speculative at this point and no one has the real info on what may be the final result of any agreed-upon deal:

This isn't the first time a company has applied the "all you can eat" method to music consumption, but it is a very unique opportunity in its potential. Nokia struck a “comes with music” deal with Universal Music around the end of 2007. To pull this off, Nokia gave up around $80 to the music companies - not exactly a small amount. In contrast, Apple is offering up about a quarter of that according to some reports.

Research has been done on the question of how consumers would react to rolled-in music plans and one company's research had shown that consumers would pay as much as $100 for unlimited music access - provided it was good for the lifetime of the device. Subscription models came in around $7-8 per month, but given the mediocre adoption of XM radio, this may not be the way to go. Perception is half of reality and getting a true "all-you-can-eat" deal up front is much more compelling than a subscription.

As we like to say - the future of consumer electronics is looking bright. Our economy... not so bright, but we definitely like where technology is headed.

Read the Complete Thread
Biggiesized posts on March 20, 2008 10:09
I pay as much as $50 for unlimited music on the lifetime of the device.
Post Reply