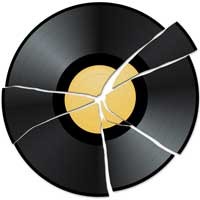 Apparently the record industry is seeing yet another sizable chunk of its monopolostic empire drifting into the digital realm. According to a news report today on Breitbart.com, US sales of CDs dropped 20 percent in the first quarter of 2007 as electronic downloads took a front seat and consumers focused on the ease of use of electronic downloadable music over the retail versions.

From this number we can draw a few suppositions:

As the 20 percent (23 million in terms of CD units) drop continued, consumers also failed to make up that gap with online sales. Online sales dropped for online ALBUMS (by 20 million units) however online SINGLES went through the roof, from 242 million to 288 million tracks in just this first quarter.

Now we can add one more thing to the above list:

Consumers apparently like the ability to control what music they purchase - and it is going to be harder and harder for artists to market entire albums - unless of course, those albums are truly great and represent equally compelling music. We may be seeing a new trend that pushes the industry n a new direction (because the record industry for years has been entirely reactionary - typically YEARS after a time which would have been advantageous to them) one that involves more focus on singles and sales of singles to the public.

With this said, album or CD purchases still account for over 90 percent of all music sales, however as that number declines (it was nearly 100% just 5 years ago) shifts and cracks in the system are bound to take effect. The first signs of this shift came in the end of 2006 when Tower Records closed its doors on a 4-decade-plus run of stores, re-emerging as an online-only storefront.

One thing to watch is how many artists will still feel the need to cling like children to the legs of the big record companies when online distribution becomes the mainstay. Will it be so important for emerging and current artists to have the physical deluge of promotion when they can be just as easily marketed online where the sales are taking place (or via independent labels that are no longer strong-armed out of the main advertising venues)? We have seen many industries, including our own shift dramatically towards the web and wonder if this isn't the start of an age where Indie labels flourish and sites like iTunes and Napster start to have an effect on the industry in a more than subtle manner.

One can always dream.