Say Hello to the $99 Wal-Mart iPhone 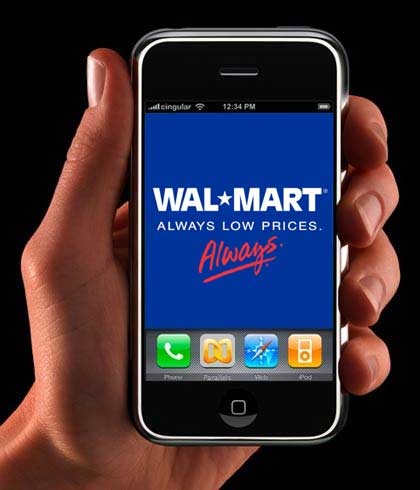 According to an article in the New York Post that is causing quite the stir, an uber-cheap version of Apple's iPhone is slated to be sold at Wal-Mart for just $99 later this month. The cheap" version is a new 4GB model, and Wal-Mart will also sell the 8GB model for the regular price of $199 - this according to employees who were sourced by the newspaper. Wal-Mart is attempting to bring the new models to market prior to Christmas so they can take advantage of last-minute shoppers looking for a great gift product.

Employees told San Jose-based Mercury News that the $99 iPhones would be 4-gigabyte models, and that Wal-Mart was attempting a pre-Christmas launch. The current 8GB iPhone went on sale July 11 at $199 - marking a huge price drop for the product and which also received a little backlash from early adopters.

Wal-Mart seems impervious to the current economic struggles going on in the country, and this seems to be another smart move for the giant retailer as it brings people into the world of iPhone without having to make a large initial investment.
Apple and Wal-Mart have yet to make official statements on the new iPhone model, so we'll report back when more information is available.

What Every American Needs to Know
Excerpted, with permission, from James Hightower,“Thieves in High Places”

The owners of one of America's premiere retail corporations is comprised of five of the ten richest people in the world, all from the same family.

At this point, it's clear that the $99 iPhone 3G rumor was just that: rumor. We have a letter that we believe to be authentic from a source within Walmart that says the iPhone will launch in the house that Sam built at 9am December 28th. At launch, only the 8GB ($197) and 16GB ($297) iPhone 3Gs will be available with a required signature on a 2-year AT&T contract. An internal pilot program kicks off today at 488 stores across the nation.

Damn…I will stick with my old man Razr for awhile longer. Hopefully, I will see something truly momentous coming down the pipeline.
westcott posts on December 13, 2008 16:16

jamie2112, post: 496587
Ouch buisness with that tool noel lee….Walmart isn't that bad they have some good deals there….although I wouldn't buy any electronic gear from them they have some great deals on boxers and socks…

What Every American Needs to Know
Excerpted, with permission, from James Hightower,“Thieves in High Places”

The owners of one of America's premiere retail corporations is comprised of five of the ten richest people in the world, all from the same family.

Their personal wealth eclipses $100 BILLION dollars. Last year the company's CEO was paid a cool $11.5 million, more than the annual salaries of 765 of his employees combined! The company's profits are over $7 BILLION annually.

In these difficult economic times how do they do it?

* This company runs ads featuring the United States flag and proclaims “We Buy American”. In 2001 they moved their worldwide purchasing headquarters to China and are the largest importer of Chinese goods in the US, purchasing over $10 BILLION of Chinese-made products annually. Products made mostly by women and children working in the labor hell-holes China is famous for.
* Their average employee working in the US makes $15,000 a year, $7.22 per hour!
* These employees gross under $11,000 a year.
* The company brags that 70% of their employees are full time, but fails to disclose that they count anyone working 28 hours a week or more as full time.
* There are no health care benefits unless you have worked for the company for two years.
* With a turnover rate averaging above 50% per year, only 38% of their 1.3 million employees have health care coverage. -In California alone it's estimated that the taxpayers pay over $20 million annually to subsidize health care benefits for these employees who get none from this behemoth corporation.
* According to a report by PBS's “Now” with Bill Moyer, their managers are trained in what government social programs are available for these“employees” to take advantage of so that the company can pass on those costs to you and me. It allows them to not only keep their $7 BILLION in annual profits, but to do so by substituting benefits they refuse to provide with benefits paid for with taxpayer dollars.
* This company holds the record for the most suits filed against it by the Equal Employment Opportunity Commission. A lawyer from “Business Week” (not exactly the bastion for supporting Labor) said, “I have never seen this kind of blatant disregard for the law.” They had to pay $750,000.00 in Arizona for blatant discrimination against the disabled! The judge was so incensed that he also order them to run commercials admitting their guilt.
* The National Labor Relations Board has issued over 40 formal complaints against the corporation in 25 different states in just the past five years. The NLRB's top lawyer believed that their labor violations, such as Illegal spying on employees, fraudulent record keeping, falsifying time cards to avoid paying overtime, threats, illegal firings for union organizing etc., were so widespread that he was looking into filing a very rare national complaint against the company. (The company contributed $2,159,330.00 to GW Bush and the GOP in 2000 and 2002. The NLRB attorney was replaced when President Bush took office.).
* Nearly 1 MILLION women are involved in the largest class-action suit every filed against a corporation. Although women make up over 65% of this corporations work force only 10% of them are managers. The women who have become store managers make $16,400 a year LESS then the men.
* The corporation took out nearly 350,000 life insurance policies on their employees. They did not tell the employees and then named the corporation as the beneficiary. They are now being sued by numerous employees, and although the corporation has stopped this practice of purchasing what is known as “Dead Peasant Policy's”, a company spokesperson stated, “The company feels it acted properly and legally in doing this.”
* They force employees to work after ordering them to punch out. In Texas alone this practice of “wage theft” is estimated to have cost employees $30 million per year. Wage theft or “off-the-clock” lawsuits are pending in 25 states. In New Mexico they paid $400,000.00 in one suit and in Colorado they had to pay $50 MILLION to settle one class-action case brought against them. In Oregon a jury found them guilty of locking employees in the building and of forcing unpaid overtime.
* With 4,400 stores they practice “predatory pricing.” They come into a community and sell their goods at below cost until they drive local businesses under. Once they have captured the market the prices go up.
* Locally owned and operated businesses put virtually all of their money back into the community which helps keep the local economies vibrant. This corporation sucks the money out of the local community, decreases wages and benefits and ships the profits out of state.
* This company doesn't buy locally or bank locally. They replace three decent paying jobs in a community with two poorly paid “part-timers”.
* In Kirksville, Missouri when this company came to town, four clothing stores, four grocery stores, a stationary store, a fabric store and a lawn-and-garden store all went under. Eleven businesses are now gone.

Skuggi, post: 494047
lol, that just means the price on the iPhone just dropped 2 bucks everywhere since everyone offers price matching anymore. Now my question, this is iPhone 3G right?

It looks like so… Too bad iPhone's won't use xD, CF, memory sticks or other expansion devices.

4GB won't hold hardly any video. It will play one of those BS digital copies that comes with DVD's/Blu-Ray's these days.

westcott, post: 496585
I would rather do business with Monster Cable than buy anything from WalMart.

Ouch buisness with that tool noel lee….Walmart isn't that bad they have some good deals there….although I wouldn't buy any electronic gear from them they have some great deals on boxers and socks…
Post Reply