AVRant #83: The Formula for Suck 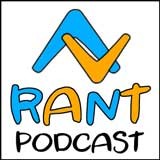 Soon I can watch low quality streaming movies with my xbox drive screaming in the background. What fun!

Tom's back and he's extra bitter. Tom was wrong, the number isn't on the site anymore. Somehow, it got deleted in one of our many updates. He's going to fix that soon. Dina thinks she's got Tom sold on an iPhone. She's wrong. A story about Tom's dad… it isn't as bad as it sounds at the beginning. Tom gets mad at Denon. Tom gets more disillusioned with Comcast. Is Wall-e having quality problems? According to our listenership - yes. Where are terrorists now? On World of Warcraft. Microsoft's E3 announcement - Tom doesn’t have to worry about the Roku box anymore. Why Tom still isn't excited about it. There will be some very exciting news next week - stay tuned. Tom forgot to say that this was the last week for the tell a friend contest so you get an extra week. You're welcome. Thanks for listening and don't forget to vote for us at Podcast Alley.

Audio only, no text version of the AVRants.

Havent listened in a while but it sounds different now. I think Tom is just trying to make himself seem manlier by playing with the EQ.

Actually… It sounds like its not playing at full speed. The music in the beginning seems slower.
Post Reply