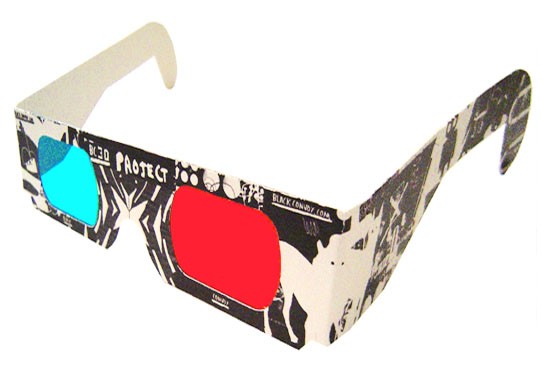 Lately, we're seeing more and more about 3D movies being released. Many directors (most notably James Cameron who directed such greats as Aliens, The Terminator and definitely did NOT direct anything about any boat sinking because that would just be wrong) and studios (Pixar for instance) are pushing for their movies to be in 3D. But is this really the savior of the multiplex and more importantly, does it need saving?

In 2007, movie theater attendance was essentially flat (though revenue was up due to higher ticket prices). The previous two years saw a decline in both revenues and attendance indicating that the public is perhaps not as interested in pulling themselves away from their big screen high definition TVs and souped-up surround sound systems to visit a sticky-floor theater full of people just looking to annoy those around them. Now that Ethanol is all the rage and corn prices are skyrocketing (not to mention fuel and paper prices) there is a predicted one to two dollar increase (or more) in ticket prices.

Currently, only about 1000 screens in the country are equipped with 3D technology. In order to provide a 3D experience it costs tens of thousands of dollars to upgrade the theater. This typically results in increased ticket prices. Regal recently announced that it would be upgrading 1500 of their screens to 3D starting "soon". The process, apparently, will be completed over the next 2 years and cost around $25,000 per screen (which is actually extremely cheap). Cameron hopes for 5000 screens for the release of his 3D movie Avatar though it is doesn't look good that the benchmark will be hit.

Movie theaters are finding that they can charge a premium for 3D tickets averaging around $3 more than regular tickets - though the Hannah Montana tickets sold well at $15. At some theaters this was a $5+ premium. Of course, not every movie will have the draw of Miley Cyrus. Some movie theaters currently are admitting that tickets (regular ones) would cost $20 if candy and popcorn didn't offset the price. With rising costs, the additional cost of upgrading the theaters to 3D, and other considerations, we might be seeing that price point for a 3D ticket anyhow.

But 3D isn't content to say in the theaters. Currently, a number of TV manufacturers (including Samsung) have TVs on the market with 3D capability. Currently this is only of much use with a computer source, though it could conceivably be used in other ways. Computer games (such as the one based on Cameron's Avatar movie) are also sporting 3D graphics and reportedly have a demo up and running on the Xbox 360. It is unknown at this time if you'll need a special display to take advantage of the 3D graphics.

But the real question is whether or not the declining ticket prices can be helped or hurt by the switch to 3D. Obviously, the trend is currently pointing towards people eschewing the traditional theater and either waiting for the DVD or perhaps catching it On-Demand when available. What is clear is that "business as usual" is not going to work anymore. Theaters will need to do something to get people excited about going back to the theaters. While some might argue all it would take is a "no talking, no kicking the back of my seat, no cell phone" rule, others are looking for additional thrills. When you can get a big screen and great sound for the same money you'd spend in going to the theater for a year (especially if you are loath to sneak in snacks/popcorn), it's hard to justify increasing cost and decreasing comfort/enjoyment.

Read the Complete Thread
Shadow_Ferret posts on May 22, 2008 11:16
What movies are they releasing in 3D? This is the first I heard of it.

And I think movie theaters are doing fine. Some movies just have to be seen on the big screen with a great sound system.

And pricewise, movies are still one of the best entertainment family values out there.
smurphy522 posts on May 22, 2008 08:25
3D in general gives me a headache (similar to Imax) and I truly feel it is usually (read: historically) applied to those movies who would not have had any other chance to make $ if that gimmick was not used. I will have to wait and see how Pixar makes use of it and what technology develops from it. They would probably be the only hope to properly apply it.

As far as Beowulf is concerned, go rent the “older” version (Beowulf and Grendel - circa 2005) which follows more closely to the original story and done in a more classic sense. Looking back I doubt any true Sci-Fi or Fantasy Buffs will consider Beowulf (2007) a success. I rented it, and yeah it was a neat idea (CGI ) but the story and acting was an absolute abomination. Not quite up there with the greats.
chris6878 posts on May 21, 2008 21:46
I paid 15 to see beowulf in 3d and would gladly do it again. It was an awesome experience. I found myself ducking and dodging as I watched the movie.
Alex at SVS posts on May 21, 2008 15:23
I kinda think so. I know a lot of people who would just rather wait for DVD than pay the elaborate cost of movies theaters (my experience renting is always cheaper). This is getting even more of a problem with larger screens and better sound as I didn't spend an arm and a leg on my setup, but I also have better sound than my local theater.

Granted, 3D movies can only save movie theaters if the technology to bring that into the home doesn't develop too fast for it to be really profitable in theaters.
Post Reply