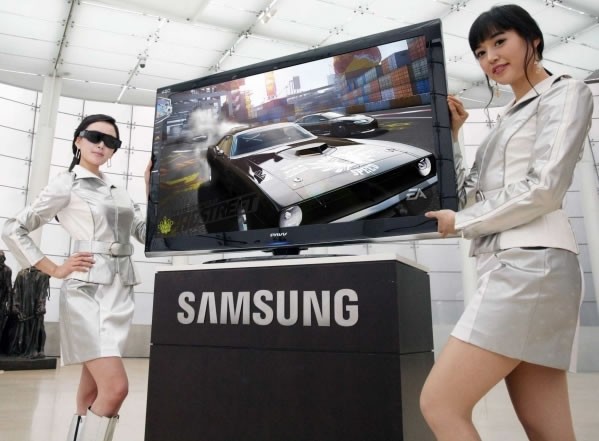 In March, Samsung Electronics has released a couple of 3D PDP TVs in Korea this week in a partnership with Electronic Arts (EA). This is a world first, and partnering with the world’s largest game content provider isn't a bad way to debut the technology. Samsung stated in a report that the move reflects its ambitious strategy to take the lead in the 3D contents market as more and more consumers seek easy-to-use 3D home entertainment.

The 50-inch "PAVV Cannes 450" model is featured with the industry's highest 1,000,000:1 contrast ratio (which they are dubbing "Mega Contrast" and can easily revive a deep black color thanks to the cutting-edge cell light control technology, according to the company. The display is not spec'd for 1080p, that being reserved for separate the 50-inch PAVV Cannes 550 model which will release in March at a cost of around $4,200. From what we could round up, the new features of the 3D sets include:

"Users could see the latest generation of Hollywood 3D movies by wearing a designated eyewear and play 3D games by just connecting 3D-only software to PCs," a Samsung spokesperson said on Thursday.

The product essentially turns 3D television into a familiar 'plug-and-play' approach that works with any compatible PC output. Since there are no difficult interfaces to manage, Samsung seems to have a way to truly deliver on the promise of 3D gaming. With EA on board, this is made even more likely to hit the mainstream sooner than later in the US markets.

The deal comes as EA has been seeking a strategic partnership with a flat screen TV maker as the company needs to secure a new "growth engine" in the online gaming industry. Still, according to the online reports, EA is still in development of much of the required compatible software titles, stating "We are engaged in final talks to introduce 3D contents that fit the televisions."

We hope they hurry up.

The mere fact that these displays are being developed with the “help” of EA makes me want to puke. I avoid games put out by that corporate behemoth at any cost; they stifle creativity within their own teams, they answer only to their shareholders (and not the gamers), they buy up the competition when they can't compete with their own IP's, and they are making a hostile takeover bid to purchase Take Two (makers of my beloved “Bioshock”). If I were the developers in Take Two's camp I would jump ship the day the deal went official. As for Samsung investing in home 3d technology I can only say “who cares”? Navigating their own website about the benefits of their latest dlp chip is confusing at best and the fact you have to use it in conjunction with your pc will only discourage joe 6 pack. I suppose it would be different if you could adopt some functionality with current players or with a future version of HDMI.
leo1058 posts on March 13, 2008 00:19
almost want to check it out in person. “almost”
allargon posts on March 02, 2008 09:53
I own the first 3D porn disc. I'm not impressed by that, either.

3D is cool, but knowing it is just a fakery in my mind often prevents me from enjoying it. I just don't see myself putting on special glasses to watch football. Of course, 40 years ago, who imagined that everyone would be able to reheat things in 30 seconds via inexpensive microwave ovens in every home?
Wayde Robson posts on March 01, 2008 14:22
And i just got done watching Beowulf on HD DVD!

This 3d stuff, I don't know… I'm not opposed to such advances but, why do we need 3d screens in our homes?

Yeah, maybe someone once said that about the telephone.
Jack Hammer posts on March 01, 2008 11:58
Sounds interesting, but it doesn't fill me with regret for buying a new tv a month and a half ago.