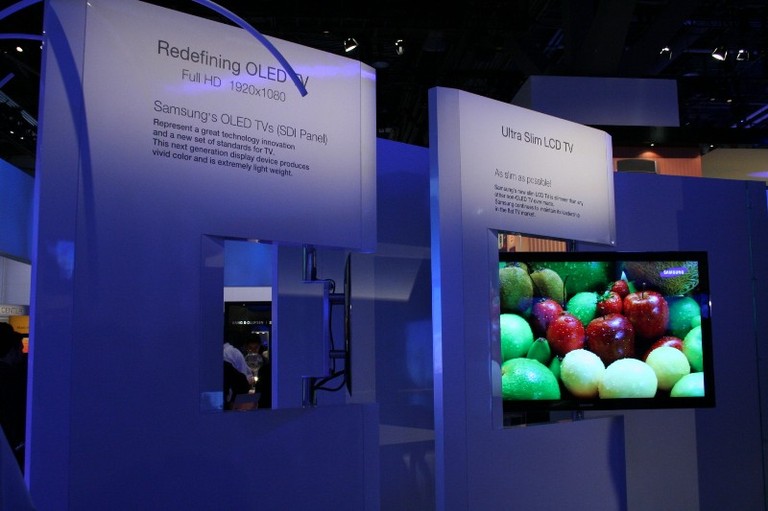 Samsung had a large display in the center of their CES 2008 booth showing off some of the technology that we may (or may not) see in the future. The lineup at the Samsung booth included two (14.1" and 31") organic light-emitting diode (OLED) TVs in addition to an ultra-slim 52" LCD TV, quadruple full-HD LCD TV, and a 3D ready plasma display.

The chic, ultra-slim OLED TVs employ AM OLED panels developed by Samsung SDI, a Samsung affiliate dedicated to display production. The finished products weigh some 40 percent less than other LCD TVs of the same size while boasting a contrast ratio of 1 million to one, color gamut of 107% and brightness of 550nit. Samsung will supposedly begin commercial production of mid- to large-sized OLED TVs around 2010.

Also on display at the Samsung booth was a 52" LCD TV that is slimmer than any other non-OLED TV ever made. It has 50,000:1 contrast ratio and 550nit brightness. Mass production of this model is scheduled to begin in 2009.

Samsung also unveiled their "Quadruple full-high definition" (QFHD), which refers to a resolution of 3,840 pixels by 2,160 pixels, which is four times greater than that for a typical high-definition display. Samsung will unveil the world's largest (82") QFHD LCD TV to date.

Samsung introducted a 57" LCD monitor (model: 570DXN) that can recognize a user's motions even when the user is a short distance away from the monitor. The monitor takes advantage of a 3D motion sensing solution developed by interactive media company Reactrix Systems. Samsung plans to commercialize this monitor in 2008 and will target it for commercial advertising applications.

While we don't expect to see all of this technology hit the consumer market, it was nice to have it all in one place where we could check it out in detail. 3D still seems years away from a viable solution (for everything but a limited selection of games) and there is ample evidence that OLED will never come down in price enough to be a serious contender against LCDs. For more information, please visit. www.samsung.com.