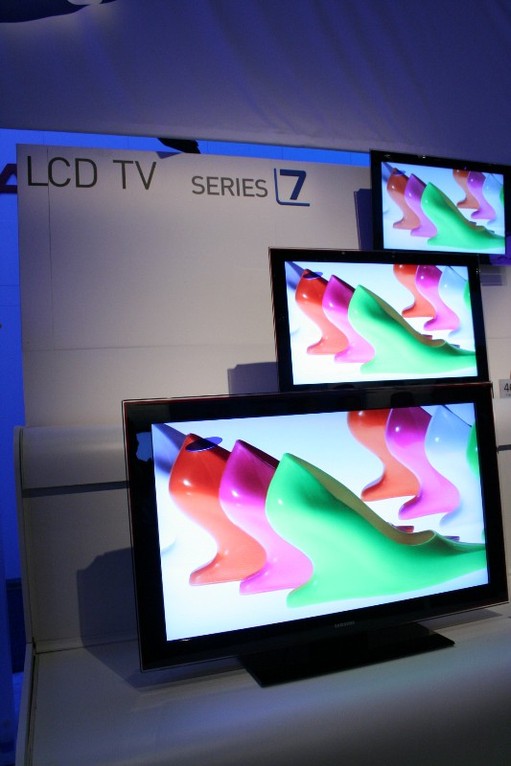 Samsung has also incorporated sophisticated networking and easy connection capability in response to consumer interest. In particular, up-to-the-minute access to weather, news, sports and stock information is just a cable and a click away through the HDTV’s Ethernet port and new InfoLink RSS service. The Series 6 and 7 LCD HDTVs enable consumers to access a wide range of digital and multimedia devices such as MP3 players, camcorders, and PCs and have their contents displayed, managed and played through the HDTV.

Series 6 Full HD LCD TV
Samsung’s Series 6 marks the first appearance of TOC (Touch of Color) design in the 2008 LCD HDTV line-up. Inspired by designs from the automotive and fashion industries, Samsung’s new molding process eliminates the need for glue or screws to construct the television cabinets. The result is an LCD HDTV with a clean, smooth finish infused with a hint of a translucent color. On the wall or off, these sets give the impression it is floating, with soft lines that complement any home décor.

Additionally, the Series 6 features the latest version of Samsung’s breakthrough super clear panel technology, making colors appear more vibrant and blacks even deeper. With the addition of enhanced films, glare is reduced and off-angle viewing has been optimized. The total package gives gamers, sports fans and movie buffs superb viewing quality for the applications they demand and use most.

Samsung has incorporated advanced HD connectivity and networking capabilities that expand the HDTV’s functionality. A wide variety of multimedia devices can be connected to the set through any one of the four Simplay compliant HDMI 1.3 inputs (including one on the side). Once connected, users can easily access device menus and manage and display content through the newly redesigned Wheel Key Remote control and the HDTV’s sophisticated content management interface.

Series 7 Full HD LCD TV
Building on the superior technologies and features found in the Series 6, the Series 7 takes networking and multimedia management to a whole new level. Consumers can easily enjoy MPEG and JPEG files stored on external devices by connecting through a side-mounted USB 2.0, turning their LCD into a full-scale home viewing gallery, or connect their MP3 players for a dynamic audio experience.

Additionally, the Series 7 features internal flash memory loaded with premium content to enjoy right out of the box, as well as an integrated woofer for an enhanced audio experience.