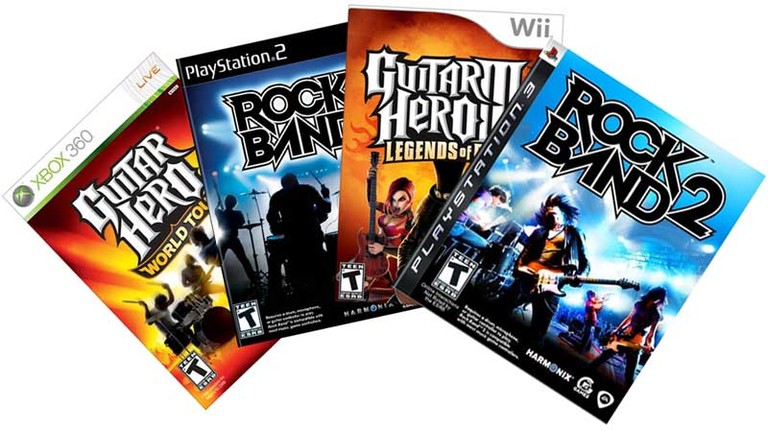 If you haven't been living under a rock for the past couple years then you have most certainly caught on the to the Rock Band or Guitar Hero craze that let's anyone pick up an instrument and play along to their favorite tunes... much to the glee of effervescent youth and the eternal chagrin of actual musicians. At its best, it's a chance to be a rock star and feel the excitement of banging out some of the greatest music ever played. At its wost... well, if anyone recalls the karaoke scene in Christmas Story... At any rate, most of us at Audioholics fall into the "omg this is the bestest evar!" crowd and play along with reckless abandon. The problem, of course, is that there isn't just one game, there are two: Rock Band and Guitar Hero. And not only that, but there are four platforms for the game - Xbox 360, PS3, Wii and PS32. Add to that the number of instruments and third party hardware and you have a compatibility matrix worthy of the best mathematicians in the country.

Enough's enough... We wanted to know what instruments would work with what games... and on what platforms. Unlike the gaming industry, which thinks I actually care about the hardware or which brand of game I'm playing, I'm all about the MUSIC. If I am an Aerosmith fan I want to pick up my guitar and play Aerosmith. I don't care whether or not that band signed with Harmonix or Activision. I may care that they left off some of their greatest songs and that the game doesn't allow me to play drums or sing...

At Audioholics we went with the Xbox 360 platform. Why? Um, it was released earlier and had way more games available at the time. That's about it. We're not PS3 haters. We also jumped into both Guitar Hero and Rock Band and are now up to the second generations of each. It was at this point that we began to encounter compatibility issues which prevented us from playing all of the music we'd have liked to. So here's our chart. Use it, embrace it... help it to give you an understanding of what your instruments will play and how well they interact with the various platforms. The list below is more or less in the order the games and hardware came to market. If an instrument isn't listed for a particular console that generally means it is completely incompatible or not designed/manufactured for that system.

The matrix below shows compatibility with Microsoft's Xbox 360 game console. If you got into Guitar Hero from the onset, your Les Paul or original USB X-Plorer guitar is going to offer you a "free" wired bass guitar for Rock Band or Rock Band 2. On the Xbox 360, RedOctane/Activision seems to be slightly more cross platform in their instruments, but this is largely because they came out with the system first and those peripherals are indeed compatible with Harmonix' Rock Band software. In either case, staying current will, thankfully, guarantee a nice cross-platform experience with both guitars and drums.

The matrix below shows compatibility with the Nintendo Wii game console. We noticed that the Wii is extremely game-specific and offers absolutely NO cross-platform game support. This is more than unfortunate for Wii owners and seems a bit obtuse on the part of the game developers, who should be more concerned with selling the more lucrative software, rather than hardware. This shoudl actually cause Wii owners to want to write Activision and Harmonix and complain - I would.

The matrix below shows compatibility with the Sony PS2 game console. What was interesting about the PS2 hardware was that Rock Band had a ton more cross-platform capability - at least with respect to the drums. As for Guitar Hero, while its wired SG controller works across the board, the drums do not. Since drums are more expensive than guitars (generally speaking) PS2 owners might be better off going with Rock Band for a full kit and picking up a Guitar Hero guitar for compatibility with Guitar Hero games.

So there you have it. We'll try to keep this list updated as new peripherals come out, but the bottom line is that while the Xbox 360 and PS3 seem to be "playing nice" with the most recent versions of the games, Wii and PS2 owners aren't exactly feeling the love and are being forced to either pick a platform or buy into two very expensive sets of hardware in order to enjoy the music on both software packages. We're hoping that this will be short-lived and mostly due to the fact that the Wii seems to be shaping up into an "accessory-happy" platform as opposed to the software-driven Xbox 360 and PS3 game consoles.

Read the Complete Thread
Ryan McPherson posts on October 31, 2015 14:47
Your chart is mostly right. The guitar that comes with Guitar Hero Aerosmith also works with rockband 2 on the wii.
LocalH posts on January 15, 2013 20:22
Just a heads-up - the PS2 controller compatibility chart is slightly incorrect. The GH Kramer works with everything that the SG controller works with, including RB 1 and 2. Also, you might want to separate GH3 and GH:Aerosmith, as the latter game added support for the RB Strats (as have all games since GH:A). Interestingly, all PS2 GH games since, and including, GH:Aerosmith actually support the use of applicable 360 and PS3 instruments on the PS2 (which, at least in the sense of RB kit, are identical between PS2 and PS3, and obviously means that no drum kit works on GH:A). The PS2 RB games only support the original-style GH controllers that attach to the PS2 controller ports along with the PS2/3 RB kit. I have personally used a 360 RB1 drum kit successfully with GH5. Not sure how it works as I've never tested it, but the files for both GH:WT and GH5 (and likely GH:Metallica, GH:Smash Hits, and GH:Van Halen as well) have support for “PS2 USB Adapter”, and GH5 also lists support for “360 USB Gamepad”, but I'm not sure how much use the latter would be (except for a vocalist).

List of strings found in the file BCUI.IRX on the GH5 disc:

hey guys ive heard that if you wont update GH3 game the RB2 guitar will work on it. any chance that is true?