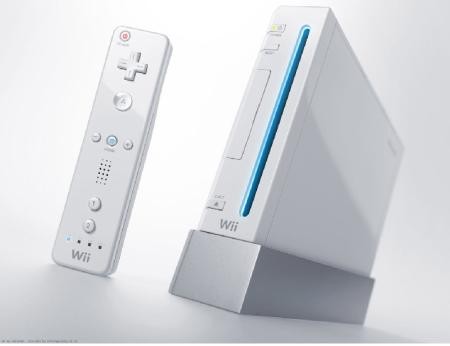 More fun than you can shake a remote at...

Nintendo was so full of smiles at their E3 press conference it was almost hard to watch. VP of Sales and Marketing Cammie Dunaway was smiling so big it was practically Joker-eske. But Nintendo has a lot to smile about. Their console is selling like hotcakes, they are (to our memory) the only console to successfully use add-on peripherals successfully, and they have silenced the critics that said that their console was a fad. Well... mostly anyways...

If there were two themes of the Nintendo press conference it was "Fun" and "Sharing." They started right in on the fun at the top of the presentation with a demo by Shaun White of his Snowboarding game for the Wii. Using the balance board known from Wii Fit, both Shaun and Cammie demoed the game. It looked pretty cool but with Cammie asking Shaun over and over if he had fun it felt a little forced. Of course Cammie made the suggestion that video games are safer than real sports. Childhood obesity here we come.

Sharing was also on the menu with a large focus on sharing and playing with other players. Animal Crossing: City Folk is a new title for the Wii spawned from the DS hit. Animal Crossing is a "Life Simulator" the goal of which is to increase the size of your house. With the Wii version you'll be able to play with your friends with the use of the Wii Speak - a mic for the whole room (rather than the individual headsets sported by the Xbox 360 and PS3). This suggests that Nintendo believes that the Wii is being used by a group (or family) to be played with other groups.

Not to be outdone, Guitar Hero: On Tour Decades is scheduled to be released for the DS. This title will let DS users share their songs with each other even if their friend only own the original Guitar Hero: On Tour. Whether these "shared" songs are full or only demo has yet to be released. We're hoping that the playlist will reflect the "Decades" in the title with a good range of old and new songs.

Nintendog of a different color

Nintendo spent a lot of their presentation talking about how they are different from the other consoles. They also talked about their sales. With 10 million Wiis and 20 million DS sold in the US alone, they have a lot to talk about. Nintendo estimates that they will have sold 100 million DS consoles worldwide by the end of the year. By anyone's measuring stick, that is a huge success.

Nintendo didn't stop at talking about their success, they also compared themselves to their competition. Their comparisons, however, were limited to the first 19 months of the console's life. What as most interesting was that Nintendo didn't use the stats from the PS3 for Sony but instead used the PS2. This consistently put the Xbox 360 in third place. We don't know the reasons behind this (maybe the PS3 numbers were so low they wouldn't have be measurable or perhaps they wanted to make the 360 look worse) but it is interesting to note.

The big push, however, was to stress that the video game user has changed... or actually expanded. Up on the screen flashed pictures of older and very young gamers. The credit their intuitive interface as the reason and frankly we tend to agree. Guitar Hero and Rock Band have wide appeal for many reasons but the intuitive interface of using the guitar (or other instruments) is definitely one of them.

Nintendo was also keen on downplaying the importance of graphics. They acknowledged that users demand better graphics but stressed that gameplay and "fun" is the most important thing. They also stressed that when others start copying you (Xbox Avatars anyone?), it is time to innovate or you lose your edge.

As has been the case recently with Nintendo, innovation has equated to new peripherals. This year is no different with the introduction of the Wii MotionPlus. This new add-on plugs into the bottom of the Wii controller and makes it more accurate. With the accessory, the Wii will recognize not only gross motions but also rotations of the controller. One is packed with the upcoming title Wii Sports Resort (a sequel to the popular Wii Sports). Additional Wii MotionPlus' can be purchased separately. While you will need the Wii MotionPlus to play Wii Sports Resort, it is unclear how many other games will require it or if the older titles will benefit from it.

Wii Sports Resort is touted to have a number of different activities though only jet skiing, throwing a frisby to a dog, and sword fighting were demoed. The graphics are what you expect from the Wii - big heads, little bodies. Given the popularity of the original Wii Sports, we expect this title to be a hit. It will ship in the spring of 2009 at $49.99 with an included Wii MotionPlus.

Nintendo's hand held DS is also looking for some innovation with a new focus on what sounded like turning the DS into a personal information device. Nintendo described using the DS at an airport to find ATMs, how the DS is used already at sporting events to keep up with scores of other games, and using it as an information source for such things as recipes. While none of this technology is ready and it still in the testing phase, it is an interesting development. Could your DS replace your car navigation system?

Of course, Nintendo announced a number of games. Shaun White Snowboarding, Animal Crossing, Wii Sports Resort, and Guitar Hero: On Tour Decades have already been discussed. For the Wii, users can look forward to Rayman: Raving Rabbids TV Party and Call of Duty (among others). The one that we found most interesting with the Star Wars The Clone Wars Lightsaber Duels. In this game you wield the controller like a lightsaber to fight with your friends or the computer. There is a single player game though it is probably similar to other fighting games in that it is just a few cinematics prior to a fight. There is talk of tying it in to the upcoming TV show of the same name as well. This seems like a game that would benefit from the Wii MotionPlus system but there has been no mention of it so it is doubtful. The game is scheduled to ship this holiday season.

A demo of Wii Music was as interesting as it was confusing. People waving their controllers in the air while stomping on the balance board to play the drums, putting the remote near their mouths to play saxophones, and strumming the air for guitars were everywhere. But there seems to be no point to the game. There is no rhythm based scoring system and in fact it doesn't even matter what button you push (for things like saxophones), the Wii automatically hits the right note. From what we gathered, you just pick your song and then the better rhythm you keep, the more like the song you picked your performance sounds. You can then record the song in a video format for later playback. We suspect that you can share these videos as well but that was not mentioned during the press conference.

The DS also has a few new games coming out for it. Nintendo was very happy with its success of the recent commercials that targeted girls. Apparently, games featured in those commercials (Nintendogs, Brain Age) saw a huge increase. Females have, over the last few years, bought almost one for one DS in comparison with males. This is not just who is buying the console (like mother's buying for their sons) but who is the recipient of the system.

While new Pokemon games are expected (and not surprising given their popularity), what got our blood pumping was a DS version of Grand Theft Auto called Chinatown Wars. Little is known of the game except that it will feature the same open gameplay with a new engine and new characters.

Lastly, Spore: Creatures looks to be the killer app on the horizon (and certainly one that you can play on the bus without getting dirty looks). The DS version of Spore will focus on (surprise) the creatures. The stylus should make customizing your creature a simple drag and drop procedure. The idea is to evolve your creature and share them with your friends.

Nintendo's Wii is certainly a different animal from the other two consoles - so much so that they don't really seem to be targeting the same audience. You have to admit that the audience that Nintendo is targeting seems to be much larger and with the inexplicable desire to spend money on peripherals. No other console has been successful in selling peripherals yet Nintendo seems to be thriving. While some (the wheel, the blaster) are completely unnecessary, more and more seem to be required. If each new "killer" app requires a new peripheral, one wonders how long the public will be willing to buy before turning fickle.

This is definitely not on my list of must have products. I had a friend who rushed out and bought a Wii. He and his wife played it for about two months. Now it just collects dust while he is busy with all of the awesome games that keep coming out for the 360 he bought later because he had nothing to play on the Wii.

I keep searching for another device that is analogous to the Wii, but the closest I can come up with is Monopoly (or other popular board game). Every family goes out to buy one and the sales numbers are huge, but the thing just sits in the closet and is brought out once or twice a year around the holidays when you have guests.

Tom, I think you are correct when you say that Nintendo is going after a different audience than Sony and Microsoft. What I really don't like is their attitude that the market the other companies pursue is bad. It also pains me to see Microsoft try to grad on to the Nintendo market with those stupid avatars on Xbox Live; I hope you can turn them off.
Tom Andry posts on July 18, 2008 15:16
Wii Music looks feakin' LAME. Presentation was horrible. The opening with Shaun White was so forced and stupid I couldn't see it for all the eye rolling I was doing.
MinusTheBear posts on July 18, 2008 12:42
The Wii is my least favorite of the 3 consoles. I am not into the gaming experience that Nintendo is trying to offer with the Wii. I am also not into buying peripherals for consoles either but with a console like the Wii that is the only thing to make the console seem fresh because their games have no lasting power. They get boring really fast. I want to spend my money on games, games and more games and to do that I need a console that makes good games. I believe Microsofts and Sony's directions have more staying power and are the future of console gaming and more importantly online gaming.

Even though I am biased against the Wii, they had the worst of the 3 conferences, it was booooooring and their games did not get me excited at all unlike seeing some of the other games at E3 like LittleBigPlanet, Gears of War 2 and Fable 2.
Post Reply