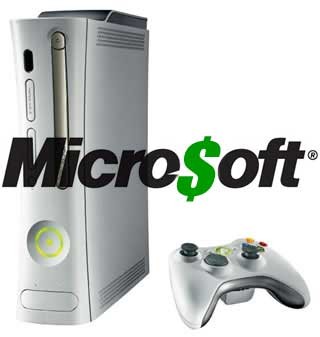 It's been a long journey, but Microsoft's Xbox 360 has now turned a profit for two straight quarters - that qualifies as more than a blip and means the console-maker has finally become profitable. Microsoft has long been playing catch-up, releasing the original Xbox as a system to compete against Sony's ever-dominant Playstation 2 - but at the expense of losing money in the process. In 2001, when it released the Xbox and it's Live networking component, Microsoft simply desired to enter the gaming fray and push as many consoles out as possible to gain market share. Now the Xbox 360 has a much-improved Xbox Live! network with over 10 million members - more than half of all Xbox 360 owners. The numbers look good for Microsoft and the financials are a welcome sight for what has been a long road to profitability.

Xbox 360 set out to beat rival PS3 in a number of ways - some designed and others not. First, it beat the rival console to market by about a year. Secondly, it decided early on that its Live! service was to be a very integral part of what made up the Xbox 360 experience. Lastly, Microsoft eschewed the thought of picking sides in the high definition format war and opted for a less expensive box that didn't incorporate a blue-laser drive.

But this is not anything like the battle for a winning high definition DVD format. Due to the massive crossover in software - thanks to developers who understand consumer choice - there is room for not only one but several gaming systems - each of which have their own strengths and defining characteristics.

This battle is solely about running a successful business model and capturing market share in what is a rapidly growing gaming market. Microsoft has sold over 17 and a half million consoles worldwide as of the end of 2007, while Sony's Playstation sits at under 11 million. Their gamble seems to have paid off as the unit associated with the Xbox 360 earned over half a billion dollars on sales of almost $5 billion in the second half of 2007. A year prior they lost over $400 million in the same period. With two straight quarters of profit, the Xbox 360 looks to be first out of the gate with numbers reaching well into the black. The numbers are almost mind-blowing, but it shows that the long-term strategists at Microsoft had a good inkling of how well this system could do.

Of course everyone is being embarrassed by the success of Nintendo's Wii, but that's just good development and capitalizing on a new way of gaming that hadn't been successfully breached before. Sony's Playstation 3 is, of course, in the midst of some long-term investment planning of its own that may take a little longer to be realized. Just how long is anybody's guess due to the additional console costs and associated losses. In either case, this is good news for all as faster profitability means that the company's will be in better shape to "do it again" and continue to bank on the long term success of future video game consoles.

Biggiesized, post: 384973
I hope to God they don't name its successor the Xbox 720. The respective name goes for Sony as well.

GlocksRock, post: 384775
That is pretty good, especially considering how much it cost them to extend the warranty and reimburse all the people who had to pay to have thier consoles fixed due to the RROD.