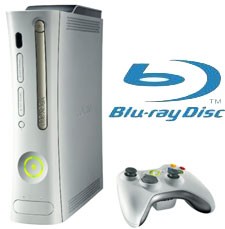 If you can’t beat ’em, join ’em. That’s what Microsoft must have been saying after Toshiba sounded the death knell to HD DVD yesterday. Now, rumors are circulating about a possible Xbox 360 Blu-ray add-on, but don’t get your hopes up too soon. The rumor of a quick Blu-ray player coming from Microsoft has the peculiar odor of link-bait.

It wouldn’t be the first time the Xbox 360 / Blu-ray rumor has surfaced, but this time it comes from SmartHouse.com. They claim their sources at Microsoft are already testing a standalone Blu-ray player add-on to Xbox 360, similar to its HD DVD add-on. They also claim Microsoft is prepared to roll the new product out as early as May.

SmartHouse also says its sources at Microsoft are working on an Xbox 360 with an internal Blu-ray player.

That was my stop at the rumor station. I’m calling BS on the whole story. Microsoft getting ready for a Blu-ray player add-on for Xbox360 maybe, but an internal drive is just too far.

The rumor is doubtful considering Microsoft wasn’t even prepared to build an internal HD DVD drive in an Xbox 360. And VC-1, despite licensing and patent woes, is still a Microsoft product that would have been used inside every HD DVD player.

If Microsoft wasn’t willing to take a loss on HD DVD drives inside Xbox 360s, why would they take one now on Blu-ray?

The claim supports itself with old news about media server PC manufacturer Niveus Media INC switching to Blu-ray exclusively for its high-def optical storage. This info came out in a press release last Friday. Niveus’ decision was made when everybody began abandoning Toshiba - even Toshi, the HD DVD dog. In a move that stunned fuzzy slippers everywhere last week, Toshi switched sides offering his services as a cute and cuddly Blu-ray-exclusive mascot. (Okay, I made up that last part, but you get the point.)

As for an internal Blu-ray edition Xbox 360, Microsoft lacks a profit motive to lose more money adding a Blu-ray player.

The company’s eye is already on the real competition to Blu-ray and any other disc media - Microsoft sees movie downloads like the ones offered by Xbox Live as the entertainment of the future. Movies on Xbox Live are already available in 720p with compressed Dolby Digital 5.1 audio.

They might not be ready to compete with 1080p at 24fps and lossless audio, but Microsoft and others in the movie download business could be banking that most people probably don’t care.

koebner, post: 383066
There's little chance MS would have any success selling an add-on for memory storage to play certain games.Developers won't design games to utilize it,as not every console would have one,like the hard drive now.This shows the short sightedness on MS' part of even having the Arcade sku in the first place.
A more likely scenario is using Live marketplace to make DLC available to address content shortfall from storage issues.The possibility also exists that in the future, certain games would be gimped for the 360 version.

All the different skus and hardware capability have probably driven developers batty. No guarantee that the 360's will all have a hard drive must make for some very tough decisions for all involved in the software development process. I think you're probably right about gimped versions for the 360 and with Sony including a hard drive in all their consoles I'd be surprised if we don't see this happening soon as we did with PS2 games vs. 360 games.
koebner posts on March 02, 2008 16:31
There's little chance MS would have any success selling an add-on for memory storage to play certain games.Developers won't design games to utilize it,as not every console would have one,like the hard drive now.This shows the short sightedness on MS' part of even having the Arcade sku in the first place.
A more likely scenario is using Live marketplace to make DLC available to address content shortfall from storage issues.The possibility also exists that in the future, certain games would be gimped for the 360 version.
Thunder18 posts on March 02, 2008 12:43

Bluesmoke, post: 379650
I agree. And I think the reason is actually quite obvious. It cannot be done on the 360, because the geniuses at Microsoft released several million bare bones “Arcade” 360s with no hard-drive. Blu-ray 2.0 Live (which the PS3 will get) requires 1gb or persistent memory. This is something the barebones “arcade” model cannot do. While Microsoft can always release a Blu-ray add-on with 1gb on storage, rather than use the 360's RAM for storage (like the HD DVD add-on did), it may be too expensive to implement. At this point, anything more than a $150 add-on will make people shun it.

Xbox360 has memory cards available right? Wouldn't they work for the 1 GB of persistent memory or are they too small? Also as Clint mentioned, couldn't they just include a GB of ram in the actual add-on drive?
To Koebner, this could be a big deal as there is a rumor floating around that Rockstar is having big issues with the fact that A: they're having trouble fitting Grand Theft Auto IV on a DVD and B: Since Microsoft saw fit to release the arcade model of the 360 with no hard drive, they are having some serious issues with making this game compatible with those hardware versions. Granted, this is a rumor, but it was answered by Rockstar Creative's VP Dan House when asked if the lack of a standard hard drive and Blu-Ray drive in the 360 created limitations so take from that what you will.
Also, as game developers created bigger and better games, I can only imagine this problem getting worse as the developers have to consider how many 360's out there are not equipped with hard drives.
koebner posts on March 01, 2008 23:56
There won't be a 360 with Blu-Ray built in,nor will there be an add-on released.
MS was very disappointed with sales of the HDDVD add-on,and have no interest in boosting Blu at all.
They have made it clear that they don't consider either movie format central to their game strategy.
Audioholics posts on February 23, 2008 08:39
The biggest reason is that Xbox 360 games aren't made on Blu-ray while PS3 discs are. As a result, Microsoft has no built-in need for changing the system. As for the reasons above, they are moot as an Xbox 360 system could come out that included a BD option and the required specs.
Post Reply