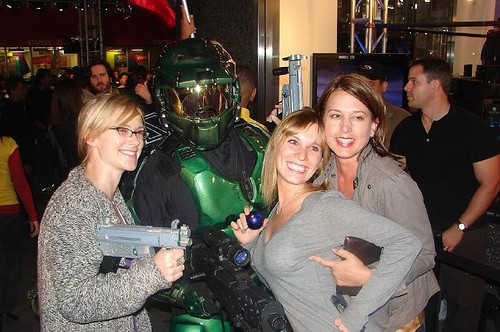 Good news for the video gaming industry 2007 was a banner year according to sales numbers from NPD:

Overall, the industry posted a 43% revenue gain from 2006, earning $17.94 billion in 2007 verses $12.54 billion in sales from the previous year. The breakdown in unit sales showed a 36% increase for software and a 17% increase for hardware. Not surprising was that December was a strong sales month for the majority of products moved out the retail door and into consumers homes.

In the handheld gaming category, the Nintendo DS more than handily routed the rival Sony PSP. Despite popular consensus of the technical superiority of the PSP, the DS went on to sell more than twice the number of units, both monthly as well as for all of 2007. The DS also managed to move enough software that one title made it into the top ten for unit sales, while the PSP did not have a showing.

On the console front, as almost everyone is aware, the Wii virtually sold every last unit to hit store shelves before the holiday shopping season. Manufacturing constraints made the Wii very hard to come by in December and this may have been to the sales benefit sales of the other consoles.

Although on a technical level the Wii is little more than a glorified rehash of the Game Cube with little more than twice the processor clock speed and RAM for twice the price, the novelty of the motion-based controllers has propelled the Wii to the top sales position in 2007 largely on the untapped audience of traditionally non-gamer demographics. The novelty of the control system alone has even brought the console to wide use in geriatric care facilities, rehabilitation, and elementary school gym classes, despite studies, incidentally funded by Nintendo marketing, that show the amount of physical activity induced by the Wii is overestimated by popular belief.

Second place for console hardware sales went to the Xbox 360. Sales for the 360 likely still benefited from Halo 3, which took the top spot for software sales and even catapulted sales of the 360 above the Wii immediately after it was released.

Money is made in the gaming console market, not by the number of consoles sold which typically have sales price subsidies, but by the number of software titles sold. The installed console base is not a direct source of profit in the gaming industry it is the software sales that a large installed base can drive. This is where Microsoft is making money and turning its first ever profit for the division.

The 360 currently has the most titles on the market as well as the greatest unit sales of top titles. Looking at the sales of top ten titles, Microsoft has moved 9.73 million units with the 360 followed by the Wii with 8.46 million units, the PlayStation 2 with 6.51 million units, and the DS with 2.48 million units. Microsoft’s software sales lead will carry through when considering all the remaining titles: the unit sales trend drops off rapidly from first to tenth place and planes out, meaning that the aggregate sales of all the titles on other consoles could only surpass Microsoft’s lead if the console had more titles than the 360.

Rearguard duty went to the PlayStation consoles, with the PlayStation 2 once again outselling the PlayStation 3. The good news for the PS3 is that December sales of 797,600 units constitutes the best month ever for the console, perhaps ushered in by recent price decreases. December is an unusual sales month, and Wii shortages further obfuscate if the PS3 sales numbers represent a trend or an anomaly.

But the bad news is that the obsolete PS2 still outsold the PS3 by a large percentage. Some analysts have gone as far as to say that based on continued PS2 sales, Sony would have been financially better off without the PS3. The PS3 actually competes with the PS2 and cost-cutting moves on the PS3 have crippled or eliminated the backwards compatibility with the PS2, which is actually selling games.

The Blu-ray capable PS3 may have won the format war for Sony but Blu-ray may have hampered the PS3 as a gaming console. By contributing to the console's higher cost and delaying release in the market, Blu-ray has left the console straggling behind the Xbox 360 and the Wii. Despite a Blu-ray win in the home video market, royalties from BD will not offset the loss from the more lucrative game royalties if Sony can not turn the PS3 around as a gaming console. Two of the largest third party game publishers have differing opinions about the outlook for the PS3 in 2008 with EA Games forecasting that the PS3 will outsell the 360 but Activision is saying that the 360 will retain its lead.

Lead by the Wii, 2007 was a phenomenal year for the video gaming industry with greater sales and a wider audience than ever before. The question before the Wii in 2008 is if it can continue its current sales momentum or will flounder as a fad as this newly sequestered casual gaming crowd moves on. The questions before the PS3 and the 360 are: Can they capitalize on this new swell of casual gamers generated by the Wii. Can they also draw them in to what has traditionally been viewed as hardcore gaming - often considered a non-mainstream activity that has kept these same people disinterested in the past.

If all three of these companies can capitalize on the success of 2007 in drawing in new gamers to the market and keeping them before they lose interest to "the next big thing," 2008 should be stellar.

Just imagine grandma taking on a pack of Brutes alongside Master Chief.

Read the Complete Thread
MinusTheBear posts on March 13, 2008 13:08
Those statistics do not surprise me at all with the huge success of the Wii in 2007 and the plethora of awesome games for xbox 360, it was a very good year for gamers. I thought i would never play as many good games as i did in 1998 but 2007 is right up there. Those statistics are very impressive but think about that those stats in the light of Nintendo facing supply problems with their console and Microsofts hardware failures, these two problems alone had a big impact on the market in 2007.
Post Reply