Video Game Sales put the Hammer Down on DVDs 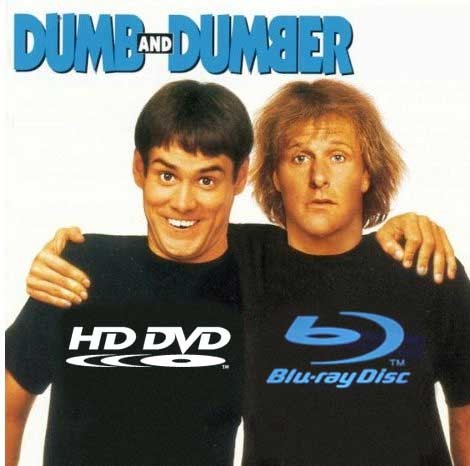 Who knew it was really a Hollywood autobiography?

According to several reports, flagging DVD sales have been outpaced by video games sales so far during the fourth fiscal quarter (Q4) 2007.

Lead by titles such as Halo 3, Guitar Hero III, and Rock Band, video games sales have already exceeded 2005 sales as of October, according to analysts at NPD. Video games have been up the last several years according to 2006 Entertainment Software Association data. DVD sales growth, on the other hand, has been flagging for several years as indicated by a 2006 MPAA market report. While several other high profile titles are not out yet, the last of the $300 million grossing movies of 2007 has hit stores shelves with the release of Pirates of the Caribbean: at World’s End, all the big guns have been rolled out likely indicating that DVD sales have peaked for the year.

Halo 3, with an estimated 2.5 million units sold the first day of release outsold top Hollywood titles including Shrek the Third. This despite Halo’s price tag of anywhere from $60 to $130 verses SD and HD video releases on DVD anywhere from $20 to $30, and considerably less when considering new DVD release sale prices that video games do not traditionally have. Sales results for Pirates of the Caribbean are not available yet, but so far the only movie release to best Halo 3 is Transformers, with an estimated 4.5 million units sold on release day.

The other titles, Rock Band and Guitar Hero, have not shown any sings of slowing sales in the subsequent weeks after their release. Strong post-launch sales strongly suggest an expanding consumer base for these games.

Retailers and the rental market will follow the money. With some of these traditional
DVD retailers reporting sales of Halo 3 exceeding that of any other offering, game or DVD, shelf space will start moving to games.

Entertainment markets have always been sensitive to the latest and greatest and trends for gaming and movies are going the opposite way.

So where is the momentum for gaming coming from?

Hollywood, in the meantime, is making a quagmire for improving home video sales by having a format war:

The currently sluggish economy limits consumer’s disposable income, forcing more decisions between competing entertainment choices. Here the choice is playing out as gaming or DVDs, but not both.

Gaming is offering compelling new next generation content and hardware, expanding to untapped demographics, and becoming a social activity to draw families and friends together. Gaming is also riding other market trends in a complimentary way with $73 million in HDTV sales directly attributed to the Xbox 360 alone and 13% of broadband internet subscribers also subscribing to online gaming as of 2005.

Hollywood’s answer to revive home movie sales and compete with gaming is to create compelling new HD quality content but then they go and make sure it is stillborn by participating in a format war rather than riding in the wave of HDTV sales.

By providing the latest HD content on competing formats, Hollywood is creating consumer confusion and hesitancy, and then limiting consumer choice by taking sides when they should care less about what kind of disc a movie is purchased on as long as consumers are purchasing the movies. With total sales for both format of HD-DVD discs taking up only a miniscule fraction of the SD DVD sales, consumers obviously are not.

It is never good business for companies to impose artificial limits on consumer choice. Such actions run contrary to the fundamentals of a free market economy driven by producer supply and consumer demand.

With DVD sales stalling and the new HD formats not even starting up in the mainstream market, it looks like all those brilliant MBAs running the Hollywood studios are being taught a refresher lesson in basic economics.

If there has to be a format war for hardware, don’t be moronic and compound the negative effect on the market by forcing consumers to pick sides by using the movies. Sell to whoever is willing to buy.

Sometimes the decisions being made by studios are so bad you wonder if they needed a good 3-year run of losses to balance out some hidden books somewhere.

Yes, but how large is the market for games down there compared to the balmy rest of the country
BMXTRIX posts on December 13, 2007 11:51
This site continually posts random statements downplaying how well HD formats have actually been doing in the first 18 months of their release compared to the DVD format, and then asking for ‘neutrality’ from studios, which, most people, even those without MBAs, will tell you is a sure fire way to prolong a format war.

The article starts of as factual journalism, then turns into a rant about HD optical discs. This seems like an opportunity to rant, instead of simply focussing on the news.

How about it get moved from the ‘INDUSTRY NEWS’ section, to the ‘OPINION’ section of the site if “STILLBORN” is the interpretation of higher rate of sales growth when compared to the DVD format?

The format war sucks, but there is very little doubt at this point, that a decision by WB to pick a side in the format war could effectively end the war. In fact, in most places outside the US, the Blu-ray format is currently doing far better than the HD DVD format - by very significan margins. 19 to 1 in Australia?!? But, sales volumes overseas are lower than here, which makes them ‘new’… which is a long way from dead.

I really wish this site would reel in statements that are contrary to basic business strategies. The goal is not free market economics - it is to sell as many discs as possible. This is achieved by eliminating one format, and having a SINGLE format that is supported by the most studios and the most CE manufacturers. This is consistent with what has worked in the world in years past.

It is also consistent that it takes several years for a new format to be introduced which may be a replacement to an older format. With current pricing and quality/speed of existing players, is it really a suprise people are just waiting things out? I know my PS3 is fast, but isn't what I likely will be using in a couple of years, while my HD-A2 is way slower and isn't as easy to use as my $90 DVD player.

The last thing a site dedicated to A/V should be doing is constantly knocking down next generation HD formats - but it seems to be a path this site unfortunately has decided to take.

I, for one, am very disappointed by this very obvious choice, and wish some people would start encouraging a best case outcome to occur sooner, rather than later, for a format.
DavidW posts on December 13, 2007 10:13

FunkIncubator, post: 341726
Why is it called a format war when referring to Hi Def DVDs, but healthy competition when discussing gaming platforms? I mean, I can't play Halo on a PS3, nor can I play Gran Turismo on an XBOX. How is that different than Disney or Universal titles being available in only one format?

For nearly the last 20 years, since the final demise of Betamax in 1988, consumers of prerecorded movies have enjoyed a single format. First the victor of the last format war, VHS, and then as new technological innovation was introduced as the DVD. One could argue that the DVD competed with VHS, but in is more accurate to realize that the difference in technology really made it a replacement. VHS and Beta were nearly identical, based on the same scientific and engineering operating principles, with variations that were minor compared to differences with DVD.

Now the movie industry goes backwards and introduces two nearly identical formats, based on scientific and enginnering operating principles, in the form of Blu-ray and HD-DVD. They are actually more similar than Betamax and VHS were, physically and electronically.

Blu-ray and HD-DVD offer the same audio and video performance to the consumer because they use the same codecs.

What you are saying is true, video game consoles do try to corner markets with formats, but the video game market is moving slowly away from this at present. The slow launch of the PS3 is causing the loss of some exclusive 3rd party titles to the competing consoles.

So the movie industry is returning to old ways after 20 years of letting consumers decide and consumers have come to like this.

Meanwhile, the video game industry, which never left the restricted business model, is seeing some new freedoms that hopefully will continue.

Once you've tasted freedom, you never want to go back to opression.
aberkowitz posts on December 13, 2007 09:39
It's supposed to snow in NYC today… *sigh* I'm waiting from the inevitable call from my parents who live on the beach in Florida to tell me how F-ing beautiful it is down there…..
Tom Andry posts on December 13, 2007 09:13
I thought the same thing as I read this in shorts and a t-shirt.
Post Reply