Stop Playing Games and Do Your Homework Dad! 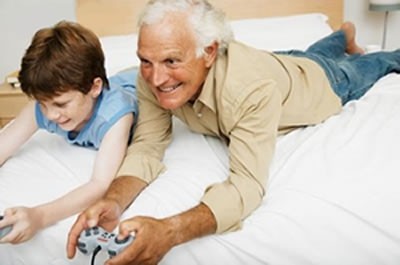 Let Grandpa show you how it's done!

My recent editorial on the release of Manhunt 2 brought up some interesting comments, not the least of which was a general dissatisfaction with the idea that video games are just for kids. Many, many moons ago, my parents splurged for Christmas and picked up an Atari 2600 for my brother and me ($200 in 1976 was quite the sum of money for a system with only 9 games). The fact of the matter is that games during this time were so primitive, so basic, that they were just for kids even though the price tag wasn't. I never remember my father playing video games with my brother and me. Does that mean that fathers all over the world didn't? No, of course not. My father still doesn't play games (yes, all your "viral web-based game" posts are falling on deaf ears there) so it may have been more of a personality thing.

But games have been around since the mid seventies! Surely gamers have aged as well? Well, according to the Entertainment Software Association (ESA) sixty-nine percent of American heads of households play computer and video games (um, that would be me) and the average game player is 33 years old and has been playing games for 12 years. What is clear from these statistics is that not only has the average gamer not "outgrown" games, but they are still actively pursuing them. So, if you'd like to make the argument that games are addictive, please feel free to insert ridiculous and unsubstantiated argument here.

But the fact of the matter is that games are just for boys right? Wrong again. Dr. Henry Jenkins over at MIT says that not only are games not just for boys but that they are being marketed more and more toward females. The ESA says that 38% of all gamers are female. And all the demeaning scantily clad female lead characters? Those must be bad for young girls, right? (though I guess Barbie is still OK) Wrong again. Dr. Jenkins cites Gerald Jones who says that these strong characterizations of women help bolster young girl's confidence.

Ok, Ok, so old people and women play video games, what does that prove? Well, nothing except that games aren't for kids. Ninety-three percent of computer game buyers and 83 percent of console game buyers were over the age of 18. Of those "kids" under 18, 89% say their parents are there when they buy games. Which brings me to my real point here - Game ratings.

The ESRB (Electronic Software Review Board) was created by the game industry trade association (IDSA - now called the ESA) in 1994 in response to political pressure from grandstanders like Senator Lieberman (who was so outspoken about it that at the time I thought he was a Republican). After being raked over the coals for "corrupting America's youth," a claim that has been repeatedly shown untrue, the game industry decided that a rating system created by them would be better than anything a morality dictating senator would come up with (good call there). The ESRB has been rating around 1000 games a year (over 1200 in 2006). But if you look at the breakdown of how many games fall under each rating you'll see a big disparity. In 2006, over 50% of the games are rated E (everyone) with only 8% getting a "mature" rating and less than 1% the dreaded AO (adults only).

Funny, considering how 60% of the most frequent game players are 18 years and older.

Now, I know that Solitaire, Tetris, and all those type games don't need to have a "mature" version so the E category should be large but look at the "mature" section?! Eight percent? But is this really the ESRB's fault or is it the game developers?

Game developers (since the days of "Mad dog" Lieberman) have had the Sword of Damocles hanging over their head in the form of corruption of children. Some part of them still fears that if they release a game too "mature" it'll bring about their ruin. But why should it? Shouldn't the ratings be enough? Well, there are plenty of people that will hoot and holler about how kids are getting their hands on games they shouldn't but according to the ESRB, 89% of parents are aware of the ratings and 85% pay attention to them when buying games for their kids. So what are manufacturers afraid of?

Politicians don't like to blame voters (tends to be bad for re-election), they love to blame institutions. Everyone hates business (mostly because we all work at one and usually hate it (not me, don't fire me) so pointing the finger at a building doesn't feel so threatening. But the reality is that the ratings have been out there for 13 years now. If kids are getting a hold of Mature and AO games, it isn't because of the people that made it or rated it, but because of poor parenting skills.

Is this really a surprise to anyone?

Herein is the heart of the matter - Gamers are older, consoles and computers are more powerful, and yet the mentality is still that games are for kids. This mentality seems to prevail not only in society but in the game developers themselves. Whenever a violent game comes out, the media jumps on it like a pack of wolves and what happens? The game becomes a best seller. Why? Because it is violent? Maybe. But I purport that it is because the subject matter is more serious, more complex, and ultimately more realistic. That's what adults want and since we're the gamers, we should get just that.

Sure there are plenty of kids that game as well and they should have games for them, but to deprive your main audience of games just because of an antiquated notion that "games are for kids" is simply silly. You're shooting yourself in the foot. While the AO rating can be debated as retribution for past Rockstar games, personally, I'm more concerned with the idea that licensed AO games aren't allowed on all the major consoles. The Wii, OK, I can live with that. Nintendo has always been stuck in the dark ages (remember Mortal Kombat anyone) but Sony, and in particular, Microsoft, shouldn't be placing restrictions. I can sort of understand porn-based games but don't their systems all play DVDs? Where's the conflict here? Mature, graphic, violent, dark, bloody games shouldn't be disallowed on systems. It's demeaning to the gamer and frankly makes me want to switch back to PC. And that's saying something.

Will d s, post: 279779
They may get bad press but I bet that whoever allows AO titles first will get a lot of sales from that bad press.

That was my point and also the point Tom made in his last article about Man Hunt.
Will d s posts on June 28, 2007 04:33
They may get bad press but I bet that whoever allows AO titles first will get a lot of sales from that bad press.
avaserfi posts on June 26, 2007 23:21
Nice read. It would be nice if people in the industry realized “Hey, I like to play games, maybe others my age do too” and started gearing more games towards that. I think the real problem with the console manufacturers are they are afraid of the bad press. When the wii was given internet access it became the “porn portal for children”. The problem seems to be that the crazy extremists find negatives in everything and the console manufacturers are afraid of this bad press when they should look for it in cases like this I mean how many people are going to be picking up manhunt 2 when it gets released because of the extra press it received?
Post Reply