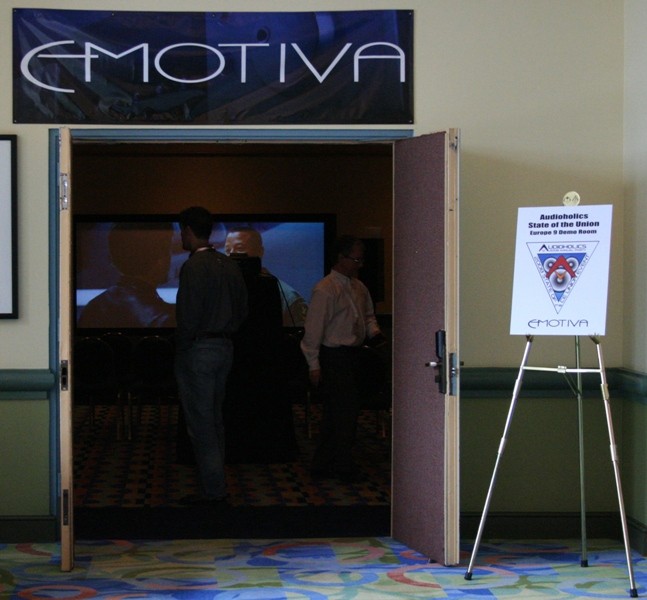 When Emotiva goes to a show like the Audioholics State of the CE Union event, they don't pull punches. While other manufacturers might show off a new product or maybe two, Emotiva's room was FULL of product that has until now only been rumors and supposition. Excited by the idea of more amps? They had them. New processors? Check. How about bookshelf speakers, tower speakers, and a CD player? Got your attention? They sure got ours.

Walking into the Emotiva room you immediately noticed the large (and I do mean LARGE) bookshelf speakers on stands. They each sport two 6.5" woofers, two 4" woofers, and a silk dome tweeter. To the left was a set of more reasonably sized bookshelf speakers that look like the ERM-1's gained a few pounds. I thought I was seeing things until I found out they were actually the new ERM-6.2 bookshelf speakers that have slightly larger (6.25" from 5.25") woofers and a bit larger cabinet. They still sport the same black finish and aluminum faceplate. The back has dual binding posts and the boundary and tweeter adjustments found on the ERM-1s.

The ERD-1's were doing surround duty on the sides but I don't think anyone even noticed them because of all the electronics that they were nestled between. On the right of the room was a table full of amps and processors. It was a amp lover's dream with the UPA-1, LPA-1, XPA-1, 2, 3, and 5 all on display. Next to that was a table with UMC-1 processor and the RSA-1. The RSA-1 is the amplifier/room correction system that is designed to be mated with the new subs that are one the way.

If this array of new speakers and amps aren't enough, perhaps you'd want to check out their brand new HDMI 1.3 A/V processor known as the UMC-1.  Don't be fooled by its low asking price of $699, this baby is packed with the latest in HDMI, TrueHD and DTS HD decoding and OSD overlay via HDMI.  Emotiva now has a solid separates solution via their UMC-1, XPA-2 and XPA-5 for less money than most mid priced A/V receivers.  Actual release date is still pending, but Lonnie seemed optimistic that it would be early Q1 2009 as they now have a  functional prototype they are beta testing. We've been talking about the dual subs coming from Emotiva for a while. They are called the ERS-212 and will be powered by the RSA-1. So far, the projected price has not changed from $999. What was new was the announcement of the ERS-112 which is a single sub solution with the amp and room correction built in. This solution will run $699. We realize that these name designations are different than the ones on the Emotiva website. As with all new products, such things are to be expected. One thing that impressed us was how well thought out the ERS-1 was. From the top, you have access to all the controls. All the cables are plugged up from the bottom (rather than in from the back) making it much easier to push the sub all the way flush up against a wall if you want. All of the subs have integrated adjustable outriggers. The entire design is very well thought out and intuitive. We look forward to getting a review sample as soon as they get one in. They also had the interface for the room correction on display. You could control it from the small LCD screen on the front of the unit or you could connect a USB cable and control it from your laptop. There are a lot of great features on it including multiple triggers, auto and manual room correction, and a neat graphical interface where you could drag a response line to adjust the system. Up would provide boost to the indicated frequencies and down would do the opposite.

On the left was the two channel setup with the new ERC-1 CD player, two XPA-1 monoblocks, and the brand new ERT-8.3 tower speakers. The ERT-8.3 have two 8" woofers, two 5.25" woofers and a silk dome tweeter. The two larger woofers at the bottom are enclosed in their own cabinet. Again we noted the integrated outriggers with these speakers. On the back are switches for tweeter level and contour, midrange level, and boundary compensation. Even though the speakers were set up to the side and didn't benefit from room treatments, this was easily one of the best sounding demos at the show. The towers sounded very lifelike and clean. More than one person was drawn into the room simply by Emotiva throwing some music on.

The ERC-1 CD player is just that - a CD player. There will be no DVD-A or SACD support. Like the XPA-2 amplifier recently reviewed, the XPA-1 has the LED indicators on the front showing you how much power it is pushing. The funny thing was that even at moderate volume, the LEDs barely registered. Often, an amp manufacturer will create a speaker so inefficient that only their amps will drive them. Apparently, Emotiva didn't get that memo because the ERT-8.3s look to be fairly easy to drive. We'll know more once we get them on our test bench.

Thks for providing the coverage of this event.