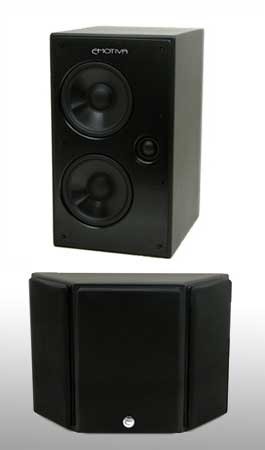 Emotiva, the maker of affordable amps and processors, has stepped into the speaker world in a big way. With the help of the famous loudspeaker designer Vance Dickason, they have put together a 5.0 package at a price that seems almost too good to be true. These speakers sound great, the dipole surrounds are amazing, and the boundary and tweeter adjustments mean that they'll fit almost any room. The downside? Just look at them…
Next Page ⇨

Read the Complete Thread
tomd51 posts on November 27, 2008 20:38
The new grills do look much better and the slight accent the ‘e’ logo adds is a nice touch as well.

I think you're right, most places would charge extra for the new grills, but I'm not surprised Emotiva didn't, doesn't seem their style.

Just something else that makes me pleased with my decision to go with the ERDs… -TD
majorloser posts on November 27, 2008 19:49
New Speaker Grill Design

Emotiva just started sending out new speaker grills for all owners of ERD-1's and ERM-1's. FREE

Not that there was anything wrong with the old grills. They just weren't happy with them. The new grills have a little darker black appearance and don't have the slight sheen of the older grills. They also include a new circular chrome company emblem with the “E”.

I received mine last week. They make a great speaker even better.

Most companies would just add a new item to new sales and call it an “upgrade”.
But they went through the expense of shipping them to all owner.
tomd51 posts on November 27, 2008 14:55
Slight resurrection from the dead of this thead ("No more rhymes now I mean it!" ). Just wanted to weigh in a little with my take of the ERD-1 surrounds.

Initially, I thought they were very good surrounds for the money, this was back when they dropped the price from $350 to $315. Now that they are selling at $250 a pair, I'd have to say these are an outstanding deal.

My first objective was to compare them to the performance of the Axiom QS8s that I'd previously owned. While they didn't quite seem to measure up to them at the time, I'd have to say after having them for a couple of months now, they more than hold their own for movies and I'd have to say outperform the QS8s with music. I thought the QS8s would be be impossible to best at their price, but the ERDs hold their own and then some. When you see/hear how well the ERDs perform, you'll be amazed at how tremendous a value they really are… -TD
majorloser posts on August 15, 2008 10:31
Emotiva's new sub packages should be pretty awesome. They are supposed to have either a single 12“ sub or dual 12” packages available before the end of the year. Might want to visit their forum for more info. They've been keeping the info “Top Secret” for over a year now while they finalize the GUI and control systems.

The ERM-1 display many of the qualities I prefer in speakers at any price point. I found them to be clear and detailed without being bright, neutral and without the resonant midrange that I find in a lot of speakers. I think it's an outstanding speaker for the list price, but free is even better. Combined with a good sub, they will be hard to beat (at least to my ears).
Post Reply