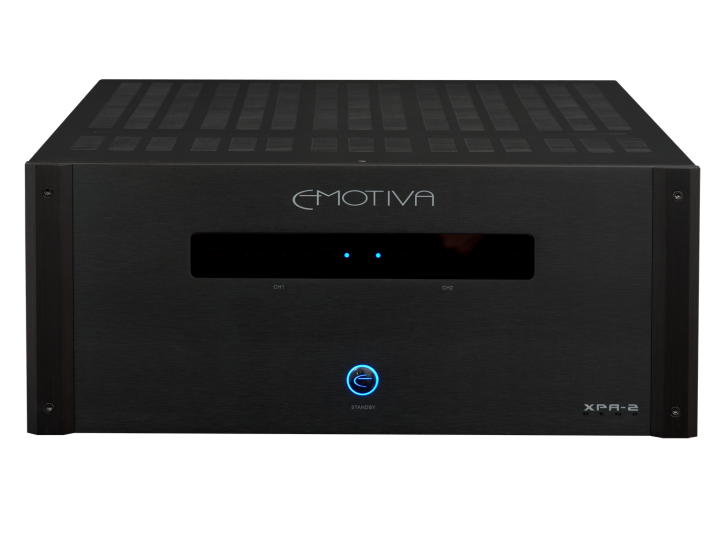 A little over a year ago I spoke to the Dan Laufman, President of Emotiva, about making a balls to the walls two channel power amplifier for under $1k that would utilize a single massive power supply instead of mono block construction like the RPA-1. His reply was “no I can’t do it for $1k, but I can do it for around $800.” I dared him to make it happen and thus the XPA-2 was born.

When the preliminary specs were leaked to me, I scratched my head in wonder of how they could make such a high power amplifier that bellies its asking price. If this thing measured well, it would redefine the budget amplifier market and bruise the ego of pricey and more prestigious brands. When the 80+ lb XPA-2 arrived at my door, I was eager to hoist it up the flight of steps in my reference room, despite a battered back with five bulging discs. The show must go on, no matter the personal sacrifice, as my curiosity far outweighed my common sense of asking for assistance. I was determined to find out what level of quality one could expect from this monster budget amplifier. But, if you wanna know the scoop, you’re gonna have to read the entire review. No instant gratification will be awarded in a one sentence summary here.

The XPA-2 is one hefty amplifier to lug around. When moving it between my rack and test gear, I found it easier to turn it upside down and slide it across my carpet for which my back thanked me. The ergonomics of this amp is quite excellent. The front panel has the classic Emotiva illuminating power switch which glows amber when in standby mode and blue once powered on. The power LED’s illuminate blue when the channels are on and the power meter illuminates blue up until the last couple of dots which illuminate red indicating possible amplifier clipping. The built in fault projection, designed for short circuit conditions or amplifier overload will make all of the LED’s of the respected fault channel blink red which can be reset by simply power cycling the front power button. I only ran into this situation on the bench and NEVER during real world listening tests.

Everything on the back panel was clearly labeled, especially with respect on how to bridge the amplifier. The bridged input and + and – speaker terminals were clearly labeled, a lesson Denon could learn in their POA-A1HDCI 10CH amplifier. There is a 5-12V trigger and toggle switches to turn on/off the LED indicators and power meters as well as switching between bridged and balanced XLR and unbalanced RCA input connections.