Blu-ray: After the Format War Will there be Format Civil War? 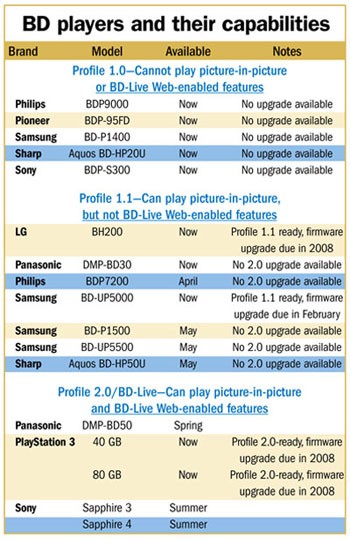 Now that Blu-ray has taken the apparent lead in the format war with Warner’s pending defection, things may finally get ugly.

Remember that business about the incomplete Blu-ray specifications, different specification profiles, potential player incompatibility, and no way to upgrade most existing player models?

Video Business Online is reminding everyone in a recent posting:

The first of the profile 2.0 film titles hit the shelves in January while many of the current players for sale on store shelves are only profile 1.0 capable and not even profile 1.1 capable.

The early adopters, who almost exclusively make up the current HD optical disc player owners, may not be, but consumers in general are confused enough just about HDTVs and the digital TV transition, let alone the format war.

For those readers who were unaware or confused by all the profiles, the BDA, in an attempt to clear up the profile confusion, has implemented a naming scheme that, of course, just clears everything right up:

How about that for marketing spin: the Final Profile is not even the Full Profile because it lacks certain features.  There is even a profile 3.0, but this is supposed to relate to Blu-ray audio only players.

This still does not answer the question about what all these profiles actually are or what they mean to the consumer.

The changes between profiles are physical hardware changes for all but the PlayStation 3, which has enough raw processing capacity to run multiple video streams and includes an Ethernet port for gaming that can be repurposed make an update as simple as a firmware upgrade.  For the majority of the nearly 4 million Blu-ray owners that have PS3s, this is good news, but for the remainder who plunked down money for set top players, it is not.

Dedicated set top players that do not meet higher profiles simply do not have the hardware to make an upgrade possible through firmware.  While I am sure that someone could come up with a homebrew upgrade, the average consumer will not have the electronics know how or soldering skills to implement such a fix.

So where does all this potentially turn into a civil war?

A good question that has a twofold answer that is caused by the fact that Blu-ray did not seem to have a finished specification at product launch that lead to multiple interim specifications.

On the consumer front, confusion, disappointment and anger.

Many early adopters have assumed all along that older profile players still play newer profile titles and the lack of additional features will not be an issue.  This assumption of compatibility has not been proven in practice and the reality is that BD-J and BD+ are still evolving in complexity and BD+ copy protection already caused some player problems with newer titles when it was rolled out.  Couple all of this with profile 1.1 requirements for a virtual file system to run on top of the main operating file system, and older players may eventually find themselves beyond a firmware fix because they simply lack hardware capability for the additional processing requirements.

According to a BetaNews report from CES 2008, BDA representatives on the show floor would not confirm compatibility of older hardware with newer titles:

When BetaNews asked developers of BD Live whether they were concerned about a backlash from early adopters who supported the format from the beginning, we were told: "They knew what they were getting into."

BetaNews: Blu-ray: Early adopters knew what they were getting into

Even BDA Promotions Chair Andy Parsons ambiguously stated that new technology changes and older hardware becomes obsolete.  True, but not usually within a single standard; defeats the whole point of a standard.

The format war did manage to bring player prices down rapidly, but many early adopters dropped some considerable cash and for them to find that those expensive players don’t work, on top of not having all the latest and greatest features, will certainly cause backlash

On the manufacturing partner front, the BDA representatives on the CES floor would only recommend the PS3 Blu-ray player due to the upcoming hardware changes.  With the PS3 as the dominant Blu-ray hardware by an order of magnitude and Sony commanding a significant portion of the remaining set top player sales, the other manufacturers are going to face squeezed sales until all this profile business shake out.

The majority of the other Blu-ray Association hardware manufactures typically wage fierce competition on each other in other product markets, so we will see how long they remain happy at the current near term sales prospects when only one company among them has a viable future proof player on the market.

None of this may come to pass, but the possibility does exist.

When BetaNews asked why these manufacturers rushed out players that were not fully capable and potentially buggy due to their BD-J implementation, the Blu-ray partner pointed blame across the room to HD DVD. "We should have waited another year to introduce Blu-ray to the public, but the format war changed the situation," he said. HD DVD was already coming and the BDA had no choice but to launch Blu-ray.

BetaNews: Blu-ray: Early adopters knew what they were getting into

ParkerAudio, post: 371170
I was wondering the same thing. The specs on Denon's site aren't exactly clear. It isn't reassuring how they scrimped on the outputs.

Any player released after November of last year, such as the Denon, is required to be Profile 1.1 or better. If there is no ethernet port, there is no question if you know the release date.

These are 1.1 profile players.

Plus - if you need - as in absolutely require - more than a single HDMI output, look at their higher end model which delivers about every possible output you could imagine.
ParkerAudio posts on February 06, 2008 14:22
I was wondering the same thing. The specs on Denon's site aren't exactly clear. It isn't reassuring how they scrimped on the outputs.
aarond posts on February 06, 2008 14:03
I see that the $1k pioneer is profile 1.0 no upgrades! What a rip off!
Does anyone know what prifile the new Denons are?
ParkerAudio posts on February 06, 2008 09:26
I wish HD DVD would have won as well, but unless Bill Gates throws a bunch of money behind it, and another studio defects, it looks like a loser.
Yeah, some of the earlier players didn't convert up to 1080p, but what would you rather have a player that doesn't provide progressive at 1080 or a player that doesn't play all the movies?
autoboy posts on February 06, 2008 01:15
Yeah, I'm pretty sad that HD DVD looks to be the loser because they always had the better format IMHO. Oh well, my PS3 is a better player than my component only 1080i (why when I can take a 1080p signal??? WTF!) Xbox so at least I'll get the better picture. I was big on their dual sided discs. I used that pretty frequently. I could care less about the features, though the 300 HD-DVD was pretty cool the way it showed the blue screen in the PIP.
Post Reply