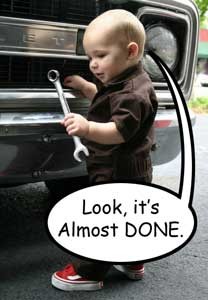 In the market for a new profile 1.1 Blu-ray disc player to make sure that the player has all the latest features such as picture in picture commentary?

Sony doesn’t have it covered.

Beware of any players announced or are available before October 31, 2007 as they are not required to meet specification profile 1.1, which mandates a secondary picture decoder and full Blu-ray Java support. Among other updates , the players will now support true picture in picture and not just two versions of the film recorded on the disc, one with faked over PIP.

Reader Comment: According to an email we received from Will, a reader, he confirmed with contacts at Panasonic Blu-ray certification center that any player CERTIFIED before 10/31 can be sold as Profile 1.0. Any player CERTIFIED after 10/31 must be Profile 1.1 to receive certification. So a player could be certified today as Profile 1.0 and not go on sale until 2008, and that would be within the guidelines for Blu-ray (the new 40 GB PS3 comes to mind as a prime example). We double checked this and it appears to be the case, meaning that consumers need to pay even more attention to the fine print when buying Blu-ray players this year.

Blu-ray’s lack of support for PIP and other features in profile 1 are to blame for a number of Warner releases that are effectively HD-DVD exclusives including Batman Begins and the Matrix box set collections.

For those readers unfamiliar with Blu-ray’s unfinished state:

The Blu-ray website is a little vague on the topic of what the profiles are and what they will mean to existing hardware. Just try searching Blu-ray’s product support for technical information or FAQ about ‘specification profile 1, 1.1, or 2’. Good luck with that.

These yet to be realized revisions have some in the movie industry worried about future compatibility of BD when using higher profile specifications on lower profile players. Remember, firmware updates can only fix software compatibility issues in existing players, not hardware shortcomings. That ‘virtual file system’ business looks like trouble in the making.

To verify that these new players are in fact only Profile 1, I downloaded the User Manuals for both players, and on page 5 of both manuals resides the following text:

"This player supports BD-ROM Profile 1 only. Playback of later versions of BDs other than BD-ROM is not guaranteed. Since the Blu-ray Disc specifications are new and evolving, some discs may not play depending on the disc type and the version..."

Profile 1 only and ‘some discs may not play’, that’s an absolute gem. I have provided the download links for both manuals from Sony for any who care to view the source.

Why Sony would release expensive midrange and high end players that are obsolete within two weeks of debut is beyond me.

Someone is going to get screwed.

Read the Complete Thread
dobyblue posts on November 01, 2007 09:29
Comparing Blu-ray Disc players to Betamax is more of a stretch of the imagination than I'm capable of making.

1) All PIP content will still be viewable as 480p through featurettes
2) All movies and main audio tracks, featurettes, deleted scenes, etc., will still work fine, only the PIP part will not be compatible nor will “audio mixing”
3) Betamax's rival was VHS (JVC) - JVC is on the Blu-ray Disc Association's Board of Directors
4) HDM is doomed to niche status unless one format prevails - with a 2:1 software lead all year in North America, 4:1 in Europe and Australia and 9:1 in Japan, Warner may very well drop HD DVD early next year after their contract with the HD DVD PG runs out. SHould that happen the software lead will increase dramatically as movies like I Am Legend, The Wachowski Brothers new movie Speed Races, Roland Emmerich's 10,000 BC, New Line's Lord of the Rings trilogy and other Time Warner properties come out only on Blu-ray. Meanwhile HD DVD will be stuck with Universal and Paramount/Dreamworks, neither of whom can release any Spielberg directed flicks only on HD DVD because, that's right, the directors want to make money off the new formats as well as the studios and the electronics companies.
5) This word “obsolete” is used to incorrectly in this context. I don't know about anyone else here, but I don't check out much in the way of extras on DVD's. I have all three of the LOTR Platinum Editions (for the longer movies and DTS:ES tracks) and have 6 DVD's there which have not been out of the plastic teeth they live in. I don't check out the videos on Enhanced CD's, I buy them for the music. This whole profile issue is not a very important one and for Blu-ray to win they will need to sell a lot more than the 200,000 “obsolete” profile 1.0 players which are no longer being manufactured.
aarond posts on October 25, 2007 19:39
"These yet to be realized revisions have some in the movie industry worried about future compatibility of BD when using higher profile specifications on lower profile players. Remember, firmware updates can only fix software compatibility issues in existing players, not hardware shortcomings. That ‘virtual file system’ business looks like trouble in the making."

The 40gig falls in the same category as the 60gig. It will have HDMI 1.3 and uses software for everything so will be completely upgradeable. Nothing has been said by Sony on its ability to be upgraded, but there are reports of DTS-MA encoding being worked on as well as bitstream output for the HD audio formats. As far as BD 1.1 spec there are some reports of firmware updates involving that too. With the way Sony is trying to use the PS3 to get BD in peoples homes I don't think they can risk not having it be fully functional, but then again who knows.