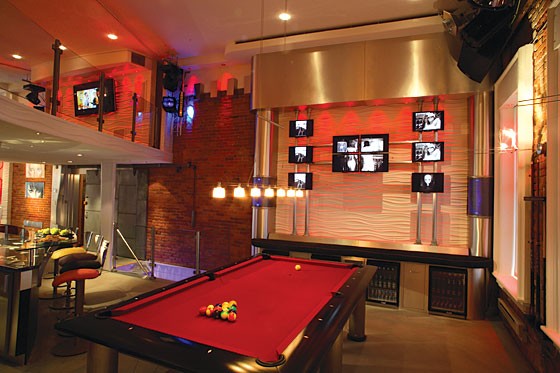 In this Cleveland-area loft, the more people, the bigger the party. And what a party it is: Along with the usual nightclub suspects, like a bar, billiards table and blaring music, the loft has a TV around every turn and two theater areas. Yup, this 1,800-square-foot space packs ’em in and packs a punch.

“He’s had hundreds of people in there,” says Shane Horner, whose Horner Networks installed the audio/video and home control systems in the 19th-century building. “He’s had a city engineer come out here to tell him how many people he can fit into the place.”

Incredibly, the wall that houses the most displays in the loft doesn’t usually show TV or movies. The “video wall,” as it’s known, features ten 19-inch Acer displays, with three stacked vertically on each side of a four-display cluster in the middle. The monitors are not tied into the loft’s distributed audio and video system but instead tap into the home computer and fill the screens with photo slideshows or digital art. (The displays in the center form one large image.)

“He was initially going to put up artwork, but we figured if he spent $10,000 for art and something happened to it, he’d have to go out and spend more money to change it,” Horner says. “We suggested putting up monitors and using them as art. They’re a hockey family, and the guy’s company is a sponsor, so the hockey team is on the slideshow a lot, and he’ll have the entire team over for parties.”

Although the video wall does not have its own audio system, music is almost always playing in the loft, so a pair of Triad InWall Bronze speakers pumps in background tunes while slideshows are going or people are using the room’s pool table. If anyone wants to watch TV while playing pool, it’s no problem: On another side of the area, an LG 32-inch LCD can swing out from the wall to show high-def satellite TV or DVD movies from the Key Digital video distribution system.

The family’s music is ripped to and distributed from a Control4 80-GB hard drive. That and two iPorts put the music front and center. Because the homeowner wanted a nightclub atmosphere, the bells and whistles include mounted club-sound speakers and subwoofers from EAW that can push the volume up to 11 when the rest of the loft’s audio system isn’t enough. “His favorite part of the loft is that club sound,” notes Horner. “If he had to choose audio or video, he’d definitely be an audio guy.”

That nightclub sound greets the homeowner as soon as he enters the loft. A welcome scene programmed into his Control4 automation system turns on an XM satellite radio channel, fires up the TVs to ESPN, raises the lights to 35 percent brightness, and opens or closes the blinds depending on the time of day. If he’s entertaining for the evening, he can hit a party hard button to change the music to one of his hard-drive playlists and dim the lights by 10 percent. A party harder scene throws on the dance lights and laser lights, dims the overhead lighting by another 10 percent and triggers a different playlist. A deejay can even plug into the Phonic eight-channel mixer to spin tunes over the club audio system, which is powered by three Phonic XP-2000 amplifiers.

Options abound on those quieter nights when the entire family is at the loft and wants to settle in for a movie. The living room entertainment setup features a 73-inch Mitsubishi 1080p DLP TV recessed into the wall, with a PSB surround-sound system. The DLP TV also connects with the computer for viewing kids’ hockey games on YouTube. Downstairs is a gaming setup that gives the kids endless hours of fun. It contains dueling wall-mounted 32-inch LG LCDs and Xbox 360s to let them duke it out in video game land, immersed in surround sound from Jamo.

Up the spiral staircase from the main level is the loft theater, where the homeowner can really kick back and fire up a mind-blowing movie experience. A Triad speaker system—ranging from the company’s Silver front channels and subwoofers to in-ceiling Gold Omni surrounds to a top-line Platinum 18-inch rear subwoofer—delivers the main audio, though often the homeowner will crank up every speaker in the place. For the video, there’s a 50-inch Pioneer Elite plasma on the wall, but that doesn’t cut it when the homeowner wants to watch a widescreen flick without any annoying black bars on the screen. So he presses a button on his Control4 mini touchpanel, and down drops a 115-inch Da-Lite screen to handle 2.35:1 superwide images from a Vidikron Vision Model 70 projector. “His goal was to have the biggest and best of what you can have,” says Horner. “If he wants the ultimate dedicated theater experience, he can press a button and curtains will come out and close off the theater, and some fiber-optic lighting will come on.”

The loft truly wows visitors upon entering, especially because the exterior landing area is so unassuming. “He wanted to leave it raw,” Horner says of the gravel-lined back alley that leads to the entrance. While the ground level probably will not change much, there’s a good chance the interior craziness will migrate to the rooftop.

Read the Complete Thread
Phil Taylor posts on May 02, 2009 17:00
Wow - just freakin' WOW!! What a pad. I'm green with envy here…
lexvid posts on May 01, 2009 10:55
Wow, what a set-up! This guy really wanted to be drowned in sound! The budget for this reno must of been mind blowing…and to think he's not done by the sounds of it. I need to find a ride to Cleveland
Post Reply