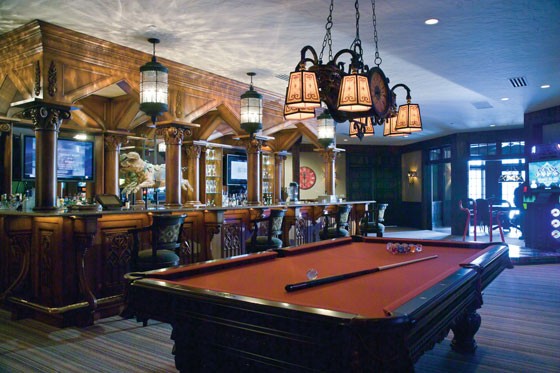 There’s a “game room” with four plasma and LCD TVs and a video gaming array that allows for side-by-side play on separate screens. There’s a “dance lounge” with fiber optic lights, a professional sound system and dueling drop-down plasmas. And that’s just scratching the surface in this 40,000-square-foot home brimming with technology.

A Crestron home control system is at the heart of the system and operates a Crestron whole-house A/V system, Lutron HomeWorks lighting system, Aprilaire HVAC system, Bosch security system and Jandi pool and spa controller. The system, installed by NETEAM of Bedford Heights, OH, also monitors more then 20 sensors throughout the property to ensure flood prevention and will email the homeowner if a sensor is triggered. One of the highlights is the 12-seat home theater. A 7.2 RBH Signature Series Reference speaker system fills the space with sound, and a Digital Projection 1080p DLP projector shines a flawless picture onto a 133-inch HDTV format screen. A DVDO video processor insures all of the images look their best. And a dedicated DVD server plays along with both Blu-ray, and HD DVD high-def DVD players. The theater also features a starfield with fiber optic lighting controlled through the Crestron interface.

The game room features two Panasonic 42-inch plasma HDTVs behind the custom-made bar, plus a pair of 52-inch Sony LCD HDTVs that can show any video channel or DVD from a whole-house audio/video system. The Sony LCDs are each connected to a Microsoft Xbox 360, Sony PS3 and Ninendo Wii video game consoles. The gaming array allows for side-by-side play on separate screens, with on-line supported games. Speakers include four RBH 6-inch in-ceiling models and a 12-inch in-ceiling subwoofer. A preset scene on the Crestron home control system turns on all the TVs to sports channels and plays an XM satellite radio sports feed over the speakers

This dance lounge, with its dramatic fiber optic lights, boasts three displays, including a built-in 50-inch Panasonic plasma above the fireplace and a pair of motorized drop-down 42-inch Panasonic plasmas that disappear into the ceiling when not in use. The “house” audio system includes four RBH 6-inch in-ceiling models and a 12-inch in-ceiling subwoofer. A secondary system features a professional Bose system and includes a karaoke player, dual CD players, and an auxiliary input for a professional DJ to connect a personal mixing console for playback through the house-wide speakers. Party, anyone?

As if that isn’t enough, the house features both an indoor and outdoor pools with speakers surrounding them. The indoor lap pool includes underwater speakers as well. The master suite includes his and hers baths with behind-the-mirror HDTVs, a sitting room with a built-in plasma and a bedroom with a recessed 50-inch plasma behind a Vutec Art Screen.

admin, post: 485874
There's a “game room” with four plasma and LCD TVs and a video gaming array that allows for side-by-side play on separate screens. There's a “dance lounge” with fiber optic lights, a professional sound system and dueling drop-down plasmas. And that’s just scratching the surface in this 40,000-square-foot home brimming with technology.

I wish I knew how to say WOW!! in every language. When I dream about my fantasy house, it always looks something like that one.
And, after reading that entire write up, and seeing the layout photos, I can finally say that I now know what the inside of Bill Gates' house looks like!
Hell, the only piece of Crestron Gear that I own, is a touch panel that I've been trying to get rid of for about 6 or 7 months now.
Thanks for posting that DREAM set-up! I think I'll go burn down my Home Theater now.
Just kidding. That set up is a true work of art!
Joe B.
Post Reply