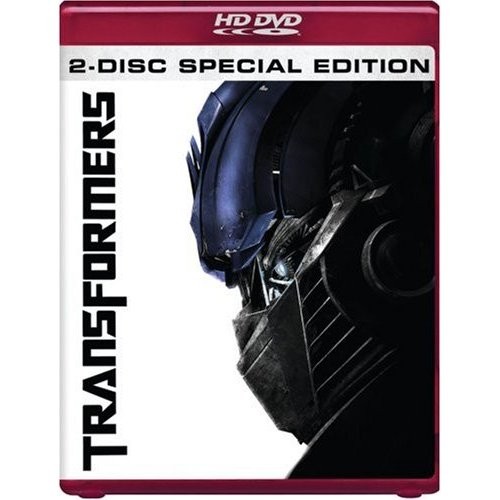 Once upon a time there were plastic Japanese toys that changed from cars into robots. Now we have huge blockbuster movies that change our childhood toys into reality! Ok, maybe not reality, but the latest Transformers movie does a pretty good job with the flashy animation and popcorn flick thrills. Drop in a kid, a hot girl, some good one-liners, and Michael Bay as the director and you’ll get this summer’s biggest movie on a plastic disc that’s sure to please.

I had the privilege of not watching this movie at the crappy local theater and instead opted to wait until the HD disc came out. As luck would have it, the distribution studio picked HD DVD as its exclusive HD offering and I happen to have a player that’ll do the trick! I was pretty excited to see this movie on my home theater as I had several transformers as a kid. I wasn’t expecting anything in particular as I had avoided reading any reviews or commentaries so the experience wouldn’t be spoiled.

I’d have to say this is a very entertaining movie! The plot is pretty thin, but there is a lot of good action to be had. The eye candy came in the form of great animation, big explosions, and hot women! I supposed some of the soldier guys were attractive too, but you’ll have to ask my wife about that one. *shrug* In any case, the story focuses around the main character, Sam Witwicky, and his love interest, Mikaela Banes. The Autobots and Decepticons are forced quickly into their lives and the story begins. In general, giant robots from space come to earth to find the source of their power and in turn try to destroy or not destroy people in their quest based on their moral predisposition. Yep, that’s the story. But hey, it’s based on a cartoon for 8 year old boys! Ok, I said it was thin, but the one liners, graphics, and action make it a really fun film if you don’t let the story get under your skin. Yeah, I like a shallow movie sometimes, don’t you? In any case, it’s a fun movie and you should see it. On to the good stuff…

This HD transfer has great color! The contrast of the film seems to be a little off, but it looks like it was intended as such. The scenes in the desert have the contrast boosted to make it look really hot outside. The scenes in the Antarctic look to be "blueified" to make it feel colder. The rest of the movie seems to have some stark contrast as well. Again, I am pretty sure this is intended to give it an ultra-real sort of feel. I didn’t see the movie in the theater or the regular DVD, but the video comes across very nicely even with this effect.

I’ll be honest, I was stunned by the lack of noise in this movie. The first time I watched it I saw no banding, no noise, nothing but good quality video. Only after watching it a second and third time did I notice a few scenes with just a minimal amount of noise in the blacks and other solid color regions. I am very pleased with the overall lack of noise.

As expected, the CG-rendered robots and other animation came out very sharp and clear. Motion blur was used as appropriate in fast moving scenes. There was one item that was very distracting, however. They used an extensive number of lens flares to make the robot lights or weapons seem more realistic. I think they went a little nuts with that and some image detail was obscured by random light. Again, this must have been intended and I believe that the HD transfer is as clean and detailed as is currently possible.

What? No Dolby TrueHD? How the heck is that even possible? Yes, that’s right, there is only a Dolby Digital Plus audio track on this HD release. I didn’t think any studios made new releases without uncompressed audio. I guess I was wrong! I HATE it when I’m wrong. Considering this is a Special Edition with 2-discs, somebody screwed up by not including an uncompressed audio track.

Get those audio levels matched and make sure your sub is turned up because I would like to note that this HD DVD has a very dynamic soundtrack. It makes great use of the LFE as well as the high end. Dialogue was very clear. Sound effects seemed very realistic without being harsh. The surround sound channels were used often and the transitions between speakers were smooth and natural. Transformers has fan-freaking-tastic audio, despite that fact that there isn’t an uncompressed audio track included.

This two-disc edition is loaded with HD special features. I loved that all the extra content is in high definition! It’s about time someone realized that if you are watching the HD version of the movie, you want your extras in the same quality.

Disc One contained the original movie, a director’s commentary, a pop text and video overlay (which is pretty cool), and some Internet-enabled content. You could actually download additional video from the Internet as well as extra information describing the content of the movie. It looked as if this downloadable content could be updated over time so if you watch the extra content 6 months from now, there will be new stuff for you to play with. I also loved the pop-up video overlays. It’s cool to see two full video feeds going at the same time. I guess I feel like my expensive HD player purchase is justified when the hardware is crying a little.

Disc Two was all extra video content including stuff about the movie as well as concept art and trailers. Again, everything was in HD and looked very good. Good enough that I actually sat down and watched all the extra content on this movie. Did you watch all the extra junk on The Matrix or Lord of the Rings? I didn’t think so… Of what I watched so far, the concept art was my favorite. The guys doing this artwork are masters and I wish I could have some full-sized prints of this stuff for my geekified office space. Wow!

The menu system is very basic. It is very similar to the function of a normal DVD menu, which is quite nice, actually. I didn’t have to wait a ton of time for menu transitions. I didn’t have to hunt for stuff buried 20 levels deep. It was just simple and easy to use. I like that! I mean, if you want to watch a movie or some trailers let’s just get to it!

Soldier – A lot of detail is clear on the faces of the actors. You can even see the reflections in their eyes.

Mikaela – The extras say she lives on diet coke and fried chicken sandwiches.
She can live on anything she wants if she looks like that!

Scorpinox – Only mentioned by name in the extra features, but it’s still one cool killing machine!

Hide the giant robots! And don’t step on the lawn!

Optimus Prime – About to take on the heat, but laying down the law!

It’s hard sometimes to want to plop down $30 for an HD movie disc when the standard DVD is half the price or less. You can’t even know if the video or audio is really all that much better. But in the case of the Transformers HD DVD, you can rest easy knowing that your money is very well spent... unless of course they release a version in 3 months that has Dolby TrueHD. After the excellent video quality, the fantastic sound, the high definition extras, and the Internet connectivity, you’ll likely be GLAD you spent the extra money. It even makes up for the money I wasted on the HD version of The Last Samurai… Really, it does!

If you are a show-off like me, then this is MUST HAVE title for your HD DVD collection. Jaws will drop, ears will open, and snickers of glee will be heard as you finally have something to show off your system to your normal, non-audioholic friends. Other friends, friends like me, will still point out that tiny bit of video noise or the fact that the audio is still compressed. Yeah, I’d be an abnormal friend, but one who STILL recommends that you buy this HD flick!