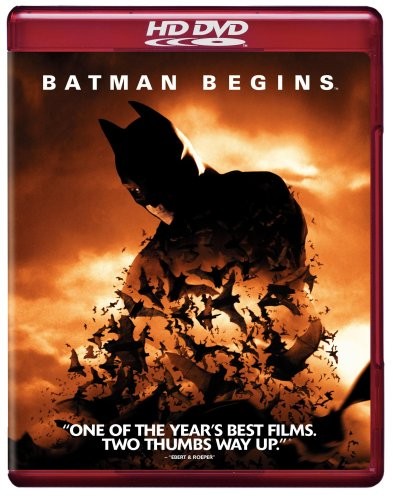 If ever a movie was created to tap into the depths of just how far a DLP or LCD projector can go with regard to black levels you would think it was Batman Begins. Full of scene after scene of dark, detailed imagery, this movie is a veritable smörgåsbord of test clips for just how low your projector will go. Combined with an audio track that will throw you back in your seat, Batman Begins is a wild ride for both sight and sound.

Statement of Calibration
When reviewing HD DVDs it's important to have an accurately calibrated system. If the review system is not calibrated properly then it is near-impossible to know if you are describing assets or flaws of the disc, or assets and flaws of your reference display or audio system. In Reference System 2 there are several things that aid in the review process. The display (either the reference unit or a transient review sample) is calibrated to ISF standards (and in the case of the reference projector, re-calibrated at least once per month). The audio system is a known reference system - as are the acoustical qualities of the treated room. This means that if the reviewer encounters an audio anomaly, he'll be able to determine whether it exists on the disc or is simply an artifact of the room or listening setup. Without these conditions in place it is all but impossible to deliver a technically-focused review and we try to do our best to eliminate outside variables from what we discuss within the review itself.

Overview (with focus on Black Levels)

As with most movie reviews, I started at the beginning. The opening scene is colorful but quickly lapses into the expected deep tones of the underground well when young Bruce Wayne first develops his fear of bats. This muted color is then carried through as he travels through India in his efforts to train himself to take on injustice. Detail abounds, but the muted colors necessarily hold the display back from showing off much in terms of vibrant color reproduction (though color does play a significant part as we'll discuss later). For that we seek the brief respites interspersed throughout the film.

As the Bat Cave is discovered by Bruce, you will notice a lot of detail in the film is present in some of the darkest areas of the rocks. This speaker to the immense quality of the cinematographer as well as the expert telecine transfer which carefully preserved this detail. I have seen projectors crush the lowest level blacks and this is an excellent disc with which to utilize as a reference for determine true lower-end dynamic range of a display – just be sure you have ample light control to pull it off. Batman Begins is clearly a reference disc for black levels. The film absolutely adhered to it's primary moral line: “It's not what you are underneath, it's what you do that defines you.” In this case, Batman Begins has plenty “underneath” to allow you to test the lower limits of your system.

Abounding vibrant color was not a feature of this movie, as I hinted at earlier, but the tone of the movie was set by the various color casts which occurred throughout. I am used to the bland stylings of movies which center around darker subject matter and the tonal characteristics of various scenes helped to segment each part of the movie as Bruce Wayne continued his journey from boy into manhood. The last thing I want to see in a Batman film is a colorful spectrum that breaks me out of the rather sullen, macabre setting that is Gotham… especially anything neon. In the rare scenes where vivid color was featured (typically during regressions into Bruce Wayne's childhood memories) it was obvious that the darker, more bland chromacity of the scenes were very purposeful contrasts and absolutely effective.

Detail in this film varied, from intricate hair and skin textures to slightly muted surfaces that didn't look much higher resolution than DVD. All in all, the quality seemed to vary in direct proportion to the light levels, something that is common with film and to be expected, though digital processing can certainly help in the mastering process. It was apparent that noise reduction was not employed too fully and the film quality was much better when the lighting was ample or better utilized. Still, though I have seen much crisper and clearer imagery, Batman Begins was no slouch and provided more than enough evidence that this HD DVD was worth the extra money over its lower resolution DVD.

From the first sub-loaded entry of the Warner Bros. logo and bat-laced surrounds of the opening scene you just knew this movie was going to sound excellent. The dialogue-driven open was almost hyper-crisp and the reverb within the well was absolutely convincing. The bats racing overhead were perfect, causing me to look both up and behind in disbelief as the surrounds did their job.

The first major fight scene in India had a great mix of crowd noises in the surrounds and very realistic punches and body hits. Detail continued into the prison isolation cell where a leaking faucet coupled with natural reverb made a profoundly authentic addition to the scene. The film showed an uncanny ability to be meticulously detailed in terms of sound with impressive LFE-sweetened effects. At all times it was drenched in realistic atmospheric and environmental effects.

When the fight/training on the lake begins you are immediately aware that you are in for a treat. Sword clashes and swooshes were interspersed with solid ice-breaking noises that literally hit you in the chest (ouch!). With my reference RBH Sound CinemaSITE system and dual SI-1010 subwoofers it was something to truly behold. Big subs in a smaller room are fun for films.

During the car chase scene with the Tumbler, the surround effects were absolutely exceptional. They weren't so overtly discreet so as to have ridiculous amounts of point-source effects coming at you from all sides, but the ambiance and vehicle pans were outstanding. The music also took on a whole new feel as it spread throughout the surrounds and circumscribed the room.

Back in the Bat Cave gentle ambient bat sounds filled the listening room, first as point source effects, then in greater quantity as the scene played out. As with many action movies, the end credit music is awesome. I enjoyed just listening to the soundtrack play out as the production and post production credits rolled, especially with the lossless PCM tracks playing the Dolby TrueHD encoded music.

Flipping between Dolby TrueHD and Dolby Digital Plus yields a noticeable difference, especially in the areas of dynamics and upper frequency detail. Sword clangs take on a much more refined sound and ambient effects seem to have more presence. It is important to note that differences in these two audio formats will depend heavily on the system and room you are located in. A loud environment or acoustically-deficient space makes it tougher to distinguish differences in a multi-channel theatrical soundtrack. I also look forward to the day when I can natively perform DA conversions to a Dolby TrueHD track with adequate bass management (through a compatible receiver) instead of having to perform the conversion to lossless multi-channel PCM audio. Don't get us wrong, we love lossless PCM, but it's always nice to reduce conversion steps and allow your AV receiver to decode the signal directly from its native format.. In the future, A-B tests will show us whether this results in an audible difference.

There is a healthy selection of special features, including three pieces of additional footage (really simple behind the scenes clips), theatrical trailer, and nine Behind the Scenes segments. Also present is a stills gallery and a 'Confidential Files' section with twelve areas of fun facts about various Batman Begins items and characters.

The parody 'Tankman Begins' is especially funny and features Jimmy Fallon. They interspersed clips from the movie with some extremely good superimpositions and re-shoots to create a different storyline. The piece originally aired as the open for the MTV movie awards. In the extras, Christopher Nolan's junket interview style isn't terribly interesting or engaging, however he isn't the focus of each segment and the content is interesting and exciting enough to be forgiving. Overall there is a large quantity of extras that really add to the value of this disc.

The menu system is pretty straightforward for HD DVD with no special frills beyond the standard dynamic movie. There is, however a nice hiss whenever the live menu is activated or hidden. You can activate the 'In-Movie Experience' to allow storyboards and video commentary to play over top the movie in real-time. This is a nice feature and is currently unavailable (in a practical sense) with regular DVD. Chapter selection was easy as normal and there is even a bookmark feature so you can store your own favorite parts of the movie (handy for reviewers like me.)

I tend to just show the pics in this section – which say far more than I ever could in describing the types of imagery, detail and color you'll find in this film.

This is a solid reference disc, both in terms of audio and video quality. For video, you will soon see whether your display can handle all of the dark level detail that this disc demands. If it cannot, then you'll be looking at a lot of featureless black patches on many different scenes. The audio track on this disc will treat your ears to ambiance that is lifelike and sound effects that will make your heart sink down into your chest. Batman Begins is an adventure that comes through beautifully in HD DVD. I can see people actually buying players simply to be able to run this movie in their home theaters in all of its glory.

Duffinator, post: 302521
Yeah but it's a great movie and looks terrific in HD DVD.