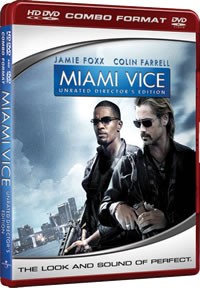 Miami Vice surprised me by being a "straight shooter" in the midst of a series of campy remakes that poked fun at their counterparts. As far as the technological side of the DVD, this is by far the most advanced HD DVD I've yet encountered. If you want to know what the menu system of an HD DVD can do, Miami Vice shows off quite a few of the features. The picture is beautiful, even though much of it is dark and shot in the evening when grain tends to creep into the film.

Statement of Calibration
When reviewing HD DVDs it's important to have an accurately calibrated system. If the review system is not calibrated properly then it is near-impossible to know if you are describing assets or flaws of the disc, or assets and flaws of your reference display or audio system. In Reference System 2 there are several things that aid in the review process. The display is calibrated to ISF standards (and re-calibrated at least once per month). The audio system is a known reference system - as are the acoustical qualities of the treated room. This means that if the reviewer encounters an audio anomaly, he'll be able to determine whether it exists on the disc or is simply an artifact of the room or listening setup. Without these conditions in place it is all but impossible to deliver a technically-focused review and we try to do our best to eliminate outside variables from what we discuss within the review itself.

Color on this film is natural without being muted. While not exactly a colorful film overall, there are plenty of scenes, mostly outdoors, when the vividness of boats, tropical trees and the ocean almost pop off the screen. What really struck me was the richness of the dark scenes. Far from drab, Miami Vice seemed to take it as a challenge to bring out the colors within night scenes like the Havana Cabana dancing scene and the cityscape shots that dominated much of the film.

What was interesting about this film was how smooth the picture was even though most of it was shot during the evening when lighting was sparse and film grain crept into the image. I found the daytime shots to be near-impeccable, but the dark scenes were truly amazing. Film grain was natural, not excessive, and only the darkest scenes exhibited enough to stand out as being noticeable when the on-screen action ensued. In particular, I noted that black levels during the scenes when the boats were on the water at night, and particularly the infiltration scene in the trailer park, yielded the most noise, but it was more of a film grain - and less of a compression artifact from lack of light. While noise was most definitely present, there was a distinct lack of banding or loss of gradation among the lowest light levels shown in the scenes. While grain crept in, banding did not.

Detail was pristine. Objects to look for included coquina buildings, Crockett's facial hair during close-ups and hair in general. The opening scene featured a raceboat screaming across some beautiful whitecaps. It was an awesome display of resolution, as were the water droplets making their way across the windshield of the boats during closer shots. Following a gratuitous sex scene with Colin Farrell there is an outdoor balcony shot with incredible texture on the building. The depth of field is such that the background is also in perfect clarity - it's really an amazing shot.

Near the end of the film the Captain sets up the final deal and the pores on his previously acne-ridden face are so clearly detailed I'm sure his agent had a fit at the screening. This, however, is nothing compared to the view in his eyeglasses where you can see a clear reflection of the surrounding scene.

Audio options include Dolby Digital Plus (English 5.1); Subtitles (English SHD, French, and Spanish). It was disappointing to not see an option for Dolby TrueHD, however it may have had to do with release dates and when the disc was mastered in comparison to when TrueHD started showing up in more recent discs. The audio soundtrack was a bit more lively than some other movies I've watched lately, but only the gunfights made particular use of the surrounds for anything other than ambience. Surrounds were otherwise used to provide a convincing immersive effect and they did an excellent job providing 5.1 mixes of the music tracks to envelope the room in surround.

Only having Dolby Digital Plus to compare to, I was unable to A-B against anything in a practical sense. I can say that audio was pleasing and the dynamic range was such that I could crank it up in my room and get some nice low end and transients, while not overloading the system or running into a need to turn down the volume. Most of that, however, may be attributed more to my room and sound system than the disc itself. Gunshots were a bit muted in the final firefight climax, however that is coming from a former sound effects editor - and I really liked the metal hits and ricochets that entered the surround speakers throughout the gunfight. Audio was good, but I wouldn’t say this was a top notch soundtrack - the strengths of this disc are in the video quality and the immersive and feature-laden menu system.

While most of the Special Features are located on the standard definition DVD side of the disc (not reviewed), the U-Control feature on the HD DVD allows some very impressive interaction. As a result, I'll save most of the Special feature comments for the Menu System section as that is where they reside.

Here is where Miami Vice leaves many other (most?) HD DVD discs in the dust. The menu system is off the hook in terms of what it does and how it allows the user to get around and access special features. Once U-Control is activated from within the menu system, U-Control enables real-time behind the scenes footage, production stills and bios to be displayed next to a reduced size movie playback window. In addition, there are some really cool additions like vehicle statistics and a "real-time" GPS system that tracks cars as they move through a scene. Both of these features came into play during the scene where Crockett and Tubbs race their Ferrari F430 to intercept the informant (who is driving a Bentley Continental GT). A 'My Scenes' function delivers the power of storing individual scenes from the film for later recall. This is fun for users who want to jump back later and replay a particular scene - and excellent for reviewers wanting to make notes on scenes that have particularly good audio or video elements. Let's hope this feature catches on for other disks. All told, this is one of the more sophisticated Menu Systems I've seen in a high definition DVD. I'm hoping more discs take the time to do their interfaces with more control and options. Most labels seem to be scrambling to simply release more titles - paying little attention to advanced features.

Miami Vice is a beautiful movie - both in the film it was shot on and the mastering process that went into making this assuredly reference-quality HD DVD - at least in terms of the video quality. The fact that its plot didn't succumb to the campy overtones of other 2006 remakes made for an even better viewing experience. Audio was satisfactory, though I do not believe this disc qualifies as anywhere near reference quality for audio. As I mentioned previously, the only thing this disc lacks, in terms of major features, is Dolby TrueHD audio. The Dolby Digital Plus 5.1 tracks keeps me from giving it top honors, but I think anyone would greatly enjoy having this disc on their shelf - if only to experience U-Control and what's possible with HD DVD.

I still own the DVD and pleased with the look of the use of camera photography that was used for Mann’s last feature “Collateral.” Dolby six-track was deep and rumbling with car rides the odd bump that creates that illusion as if the vehicle just went over a speed bump at the airport.

The ending I don’t what to talk about that it left me disappointed with an abrupt ending, thou I liked the end credits in Dolby and played Moby in A&B mode repeat for well over an hour.

So next time please a better ending please!
stratman posts on June 05, 2007 13:14
Ah Crockett and Tubbs! Those were the days, shoot-outs in the middle of the day in packed malls, dead bodies everywhere, bowls of coke in nightclub's mens and ladies rooms. More exotic cars than you could count in a day. Bales of MariaJuana dropping from the skies (literally), Miami was a live video game back then and as The Godfather was reportedly the mob's favorite movie, Miami Vice was the Cocaine Cowboy's intellectual brain feed. It was aired on Friday night and few undesireables that I knew wouldn't sport their Brionis and Ferragamos untill the show was over, then they hit the clubs. There were so many Tony Montanas here that the Pacino character became a moniker for anyone involved in the trade. I remember when the first Grand Prix of Miami was held in the streets of downtown and Crockett and Tubbs rode their fake Ferrari Daytona (Corvette) down the impromptu racetrack waving while the fans booed and waved their middle fingers at them, the thought of driving around in a fake Daytona, soon after they switched to a Testarossa. That was the real Miami Vice.
mike c posts on June 04, 2007 18:56
but but but, it's got Colin Farrell
Post Reply