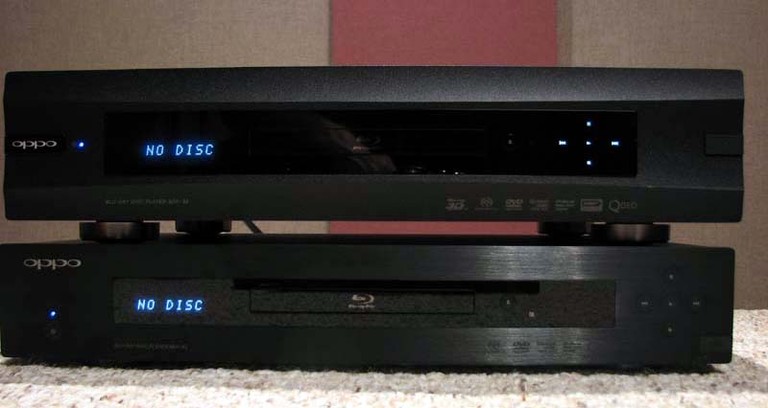 Just a few short years ago, Oppo dazzled us with their first generation Universal Blu-ray players, the BDP-83, and BDP-83SE, respectively.  These players were so good that a particular high end company decided to shoehorn the entire product into its own chassis and charge a $3k+ premium for it.  We did a full barrage of audio and video tests on these new Oppo players and found benchmark performance on everything but the analog bass management functions.  With Oppo's recent release of their second generation players, the BDP-93 and BPD-95, respectively, we were curious not only to see if Oppo addressed our minor concerns of their first generation players, but also how far they were able to push the envelope of performance with these new premier players.  Is the BDP-95 (MSRP $999)  really worth 2X the cost of the BDP-93 (MSRP: $499)?  Read on to find out....

Configuration of both the BDP-93 and BDP-95 players is virtually identical.  They follow the same setup procedures found on the BDP-83 which we found to be very intuitive.  The only real gripe we found was that, on occasion, both players seemed unresponsive to the remote control.  There were instances where we tried to navigate through the setup menus where the players simply didn't respond.  We informed Oppo about this and they also confirmed some users occasionally experienced similar issues.  We suspect it's an issue with the remote control or receiver.  Oppo is currently investigating this and based on their track record, you can be assured it will be resolved promptly.

Both Oppo players share a similar Lexiconish front faceplate while the BDP-95 adds a touch of class by backlighting the main playback buttons.  The BDP-95 also has a larger power button with the Oppo logo embedded in it.  Both players yield a much nicer look compared to their predecessor BDP-83 series players. Both players have the same complement of I/O's (two HDMI, one component, composite, toslink, coax, Ethernet, etc) though the BDP-95 adds dedicated unbalanced and balanced stereo analog outputs.  The Oppo BDP-93 does NOT have dedicated stereo analog outputs.  Users wanting to run analog stereo to a second zone from the Oppo can do so only if they are not already utilizing the dedicated multi channel outputs.

The 8 channel preouts of the BDP-95 are also spaced further apart and horizontally arranged into one long row instead of two rows like the BDP-93.  Both players analogue outputs are color coded to better mark corresponding channels.  Both players also sport detachable power cords, though the BDP-95 is of three-prong type while the BDP-93 is two-pronged.  The BDP-95 grounding scheme requires a 3 prong power receptacle for its balanced analog outputs to maintain a truly differential signal path from input to output and thus improving Common Mode Rejection and further reducing the noise floor. We honestly weren't expecting such differences in build quality between the two players.  Once we popped their hoods, the BDP-93 seemed hollow in comparison.  It was almost as if they were two completely different players.   Both players utilize identical video circuitry while the BDP-95 gets a significant audio upgrade by implementing premium ES9018 Sabre32 DAC's and a dedicated analog power supply with a Rotel built toroidal power transformer.  Both players share the exact same transport which was kind of a bummer to us.  We would have liked to see a slightly beefed up disc drawer for the BDP-95 if for no other reason than high end appeal.

We asked Oppo to provide us a complete list of differences between both players which is tabulated below.

Any thoughts on the superior audio of these two players?
djreef posts on March 24, 2012 19:51
Having come from a Denon DVD-3930ci as a source component, I'd be remiss to say I could hear a difference, though I think I can from a sq standpoint ;O. What sold me on the BDP-95 was the flexibilty of the unit, and the fact that I could finally ditch another link in the chain - my pre-amp.

Ronbro, post: 874427
I'm sure glad this web site is here…I have an older B stock Marantz SACD player that just doesn't seem to give me what I am wanting…a heck of allot more audio refinement.
I have an Integra receiver , Axiom M80 speakers & mostly Blue Jeans cables front to back w/ the exception of a Synergistic Research Coax Digital out from the Marantz….any other ideas or thoughts for improvement?
Thanx

May be the Marantz player is not the weakest link of your system. Also, the quality of the recording is often more important than the format. Try playing some know high quality discs and see if you get the results you are looking for. Again, it does not always have to be SACD or DVDA, a HQ CD could sound better than an average SACD.
Ronbro posts on March 24, 2012 13:02
Blue Ray Players

I'm sure glad this web site is here…I have an older B stock Marantz SACD player that just doesn't seem to give me what I am wanting…a heck of allot more audio refinement.
I have an Integra receiver , Axiom M80 speakers & mostly Blue Jeans cables front to back w/ the exception of a Synergistic Research Coax Digital out from the Marantz….any other ideas or thoughts for improvement?
Thanx
Rose75 posts on March 19, 2012 04:17
How quiet is the transport, can it be heard from say a couple of feet away?
Post Reply